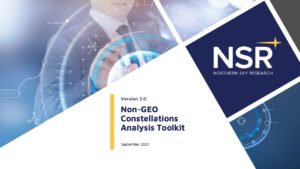 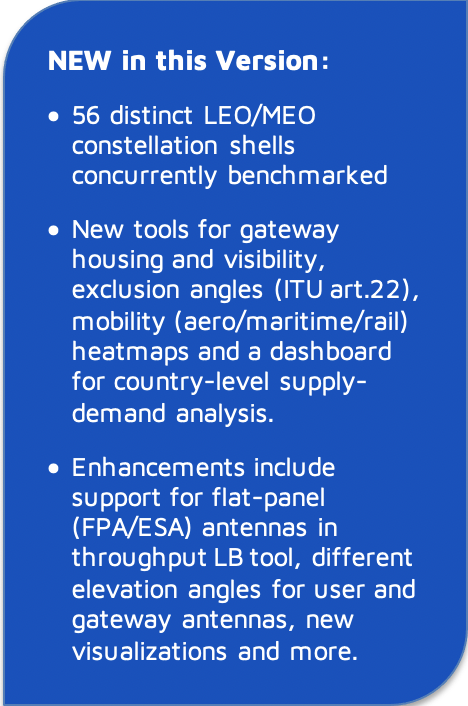 is an assembly of easy-to-use analytical models that x-ray and benchmark LEO and MEO high-throughput satellite systems at key architectural and business layers.

The configurable, 360-degree NSR toolkit is meant for both business and technical professionals alike seeking in-depth understanding of Non-GEO high-throughput SATCOM.  Version 2.0 of NSR’s popular NGSO toolbox has expanded in breadth and depth, augmenting the number of tools to 15, doubling the input and output data tables to 56 sub-constellations and allowing users to conduct granular, territory-level assessments for fixed-data and mobility applications. 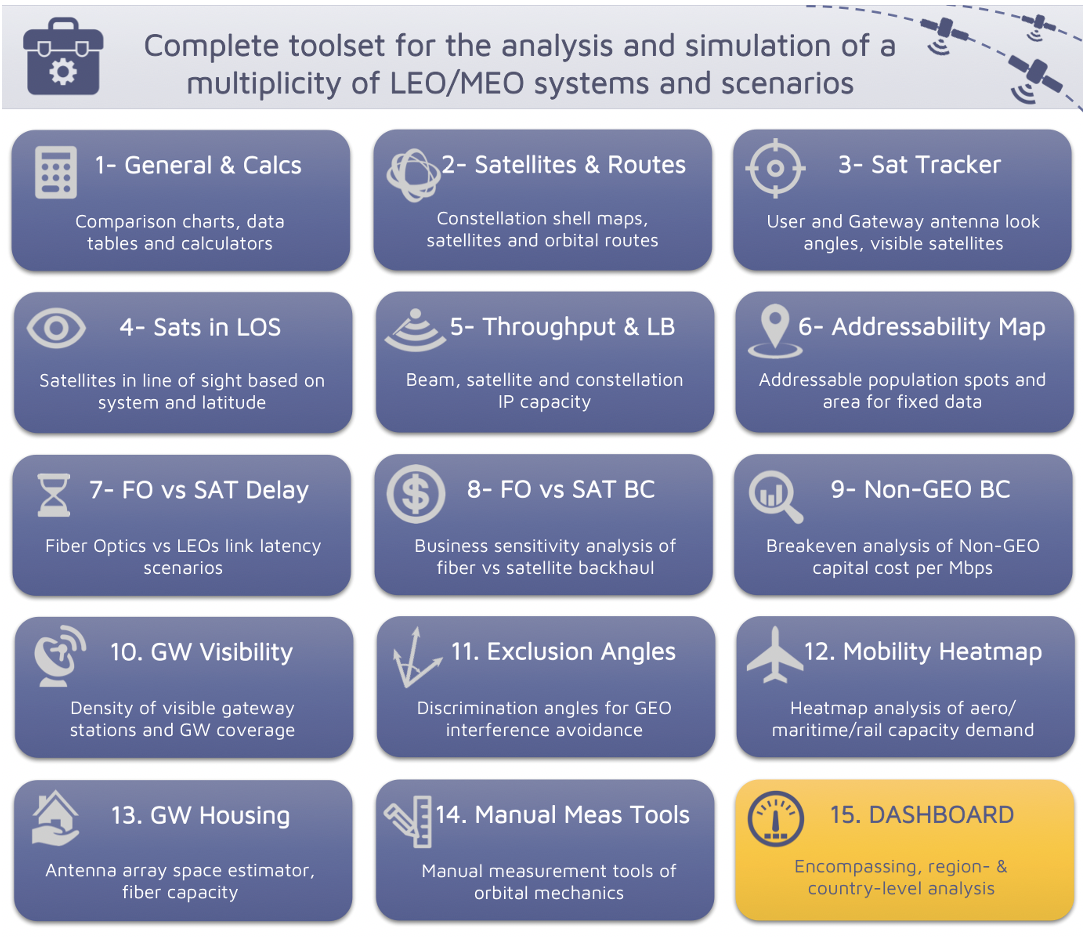 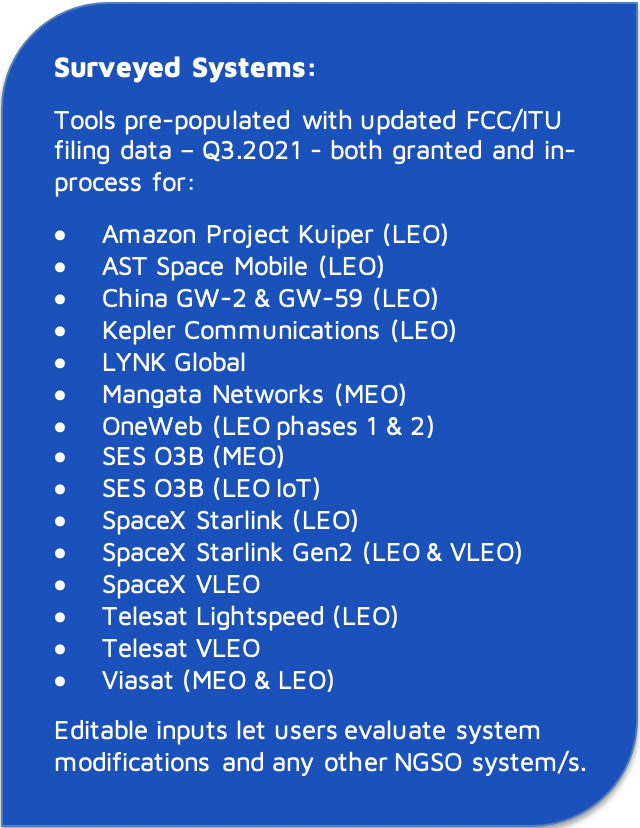 Thousands of pre-loaded (and editable) data points processed through the toolkit’s logic constitute an unbiased, factual vehicle for deep-diving into the technical and business aspects that jointly modulate addressability, bandwidth supply-demand and constellations’ competitive standing versus terrestrial networks.

With pre-loaded datasets, configurable filters, inputs and visualizations, NCAT2 is a standalone NSR product that may also be leveraged in combination with market data and insight from relevant NSR research studies.

Constellations of thousands of LEO and MEO satellites beaming tens of Terabits per second are not only transforming the space business, but also affecting the wider telecommunications industry, making it imperative for planners and decision makers across telecom and satellite value chains to measure and visualize the impact at granularly defined levels.

Bottom Line: Clients can easily conduct their own assessment of Non-GEO Constellations supported by NSR-developed tools and datasets.

Who Should Purchase NCAT2:

Systems Analyzed in this Product: 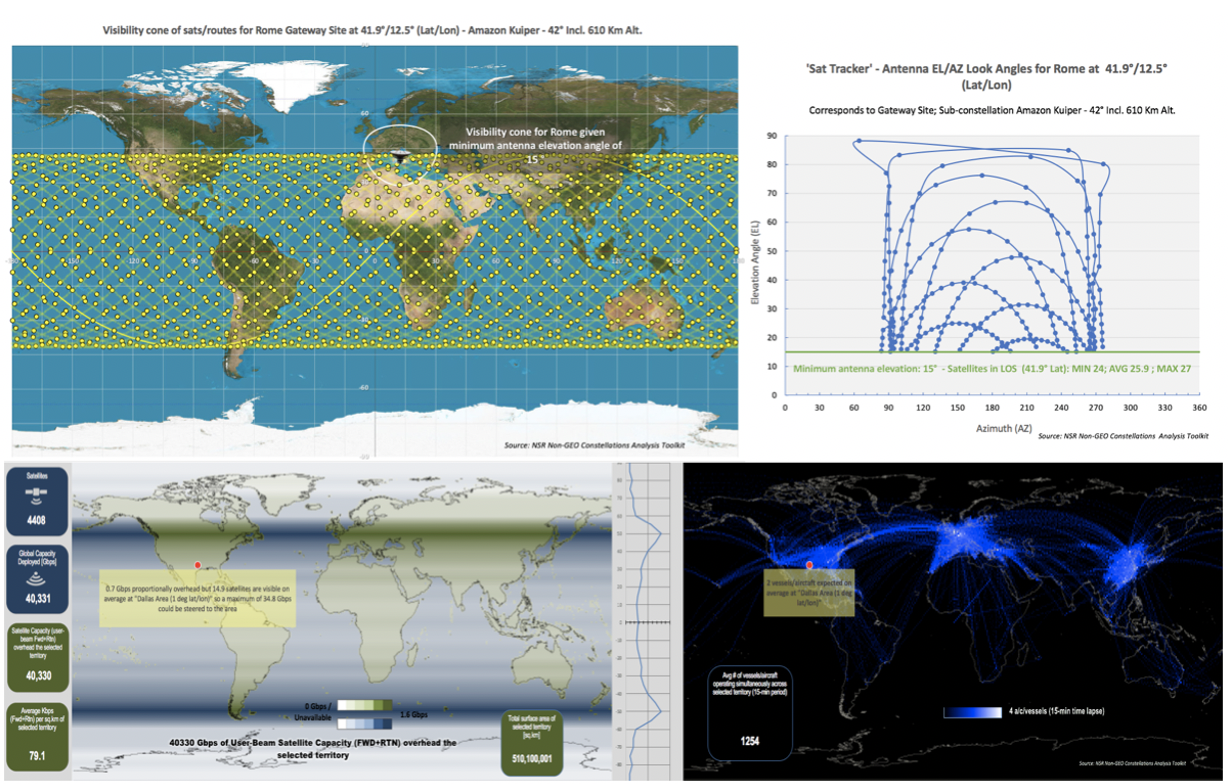 * FCC filing datasets were digitized for use within the link budget (LB) analysis “throughput” tool. FCC filings digitized include Telesat Lightspeed (granted and modified), Telesat VLEO, Amazon Project Kuiper, Viasat MEO & LEO, SpaceX Starlink (approved/operating Gen1 and filed Gen2), SpaceX VLEO, OneWeb (phase 1 & 2) and SES O3B (current and next generation). FCC/ITU filings for the other surveyed systems (China GW-2 & GW-59, AST SpaceMobile, Lynk Global, Kepler Communications and Mangata Networks) are not fully digitized. Data and calculations for such systems are provided for orbital mechanics but not for IP throughput analysis. Toolkit users can refer to the relevant ITU/FCC filings to extract technical data and leverage the generic Link Budgeting tool (included with the toolkit) to run performance calculations on such systems and/or any other.

NSR’s NCAT2 in the News

Capabilities and Limitations of Non-GEO Constellations

LEO Speed: When Milliseconds are Worth $Millions

Comparison charts and maps of constellations at an architectural level.

Antenna “look angles” for visible routes at a configurable location.

Number of satellites in visibility across all latitudes, per constellation.