In article “Chinese iSpace achieves orbit with historic private sector launch”, Leena Pivovarova, an analyst at consulting firm Northern Sky Research, told SpaceNews that, China is growing its space program by leaps and bounds, including access to space, including through, “a unified strategy for coordinated public-private efforts to dominate space markets at large.”

Discussing satellite finance, “nearly US$48bn must be invested to deploy all constellations as they are currently planned”, say analysts at Northern Sky Research. “While capex can be considered a fixed variable, dependent on the architecture of the constellation, revenue estimates are a different game altogether,” NSR senior analyst Shagun Sachdeva said.

During the European Space Week in Tallinn we had the pleasure to talk to Dallas Kasaboski analyst at Northern Sky Research and talked with him about e.g. the European New Space market, differences between the USA and Europe and the earth observation market. We learned a lot and are sure you will get some insights.

Are Small GEOs the “Next Big Thing”?

If there is something certain in the current satcom market, it’s that Video is stagnating, and Data is the future growth driver. However, many satellite operators are still cautious adopting HTS. 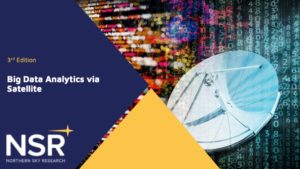 Satnews Daily: Big Data Analytics via Satellite: Where is it Headed? A Free NSR Webinar Scheduled to Scrutinize the Topic

Leveraging the power of cloud computing and Big Data, data analytics is expected to add value across a range of applications. Will the drive for digitization spanning these market verticals suffice to meet industry expectations of customer demand? While the opportunity for satellite-based Big Data lies largely in the need for insight into mobile, remote.