Home > The Bottom Line > LEO Survival of the Fittest…or the Smartest?

LEO Survival of the Fittest…or the Smartest?

Financial “fitness” can be thought of as the funding – either self or outside – that is essential for breaking the barriers to entry and for survival in the short-term. “Smartness” can be considered as the right target market, pricing strategy, capability and repeatability to ensure long-term sustainability.  So, when it comes to LEO HTS Constellation survival, what is the answer to the question: Fit or smart?

In its  Satellite Constellations: A Critical Assessment, 2nd Edition report, NSR analyzed the available (outside) funding of the main LEO constellations and compared it to its estimates of CAPEX – based on the announced launch plans. 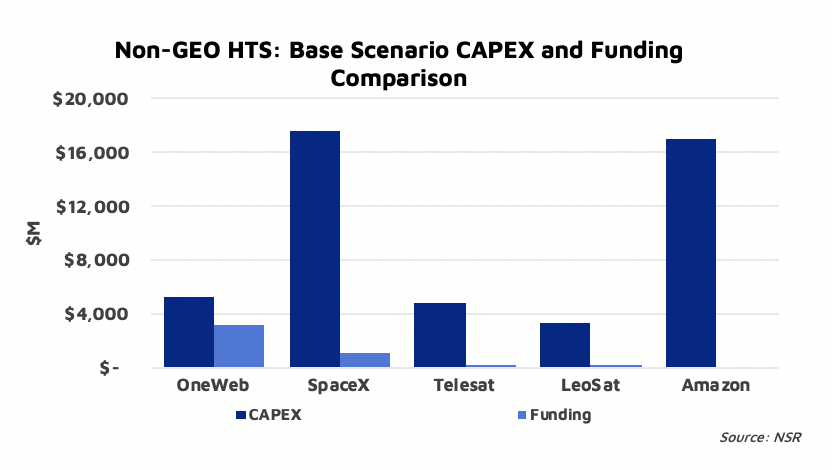 And, the figures are out-of-this -world, literally: A grand total of almost $48 B must be invested to deploy all constellations as they are currently planned.

From this assessment, based on the funding status and CAPEX to funding ratio, OneWeb is the “fittest” player today. That said, even though Amazon does not have any announced funding at this stage, NSR believes their deep pockets ensure that this will not be a challenge in the launch of Project Kuiper.

While CAPEX can be considered a fixed variable, dependent on the architecture of the constellation, revenue estimates are a different game altogether. NSR forecasts $43.6B in overall Non-GEO revenues over the 2018 – 2028 period. The revenue projections are based on NSR’s extensive and long-standing bottom-up research on all satellite market verticals, including pricing analysis, market drivers and restraints and customer demand.

These revenue projections, at least in the short- to mid-term, are considered the total revenue bucket for LEO constellations. As such, NSR believes that the long-term survival of the satellite constellations will depend on how each can differentiate their business model to gain a higher market share. Looking at each constellation’s business strategy tells a unique story for all involved that raises questions about their fitness and smarts.

OneWeb appears to be changing gears in the short-term, as its plans from the get-go has been to connect the unconnected by providing low-cost internet to schools and small businesses in developing and under- developed regions across the world. To compensate for higher than anticipated expenses during the early stages, OneWeb has shifted their short -term priority towards higher revenue generating applications. The highest amount of funding of any constellation so far ensures the survival in the short-term, but will the revised strategy be enough to sustain OneWeb in the long-term?  Early success (or not) in markets like Alaska will tell the story.

“A means to an end’ can best summarize the narrative story for SpaceX LEO HTS constellation. SpaceX has been quite clear about their motivation behind the constellation: Starlink is not only a means to fund their ambition to go to Mars but also provide high bandwidth communication between Earth and Mars. As one of the biggest constellations planned, SpaceX’s constellation is also associated with the highest expenses. With over $1B in funding raised so far, it makes up a mere 7% of the total estimated CAPEX. In terms of revenue strategy, however, SpaceX wants to compete with terrestrial broadband and offer high speed internet. Although competing with terrestrial pricing might be a challenge, Starlink’s architecture does allow SpaceX to offer high speed Internet to markets with high price tolerance. But will the market size be big enough to support SpaceX’s long-term plans?

The latest news from Telesat indicates it will hedge its bets with a hybrid architecture. As capacity prices go down and the uncertainty around LEO constellations is amplified, the GEO satcom business has been a challenging one over the last 5+ years. Various strategies are being considered by different GEO operators, and Telesat’s is to launch their own LEO constellation. The Telesat constellation is planned to be a global mesh network providing highly secure broadband infrastructure, and its target markets are government and enterprise, where price tolerance is quite high. DARPA’s Blackjack program contract is a promising start for Telesat, but is there a risk of cannibalization of their GEO revenues?

Strategic partnerships are the key for LeoSat, who, similar to Telesat, is targeting high speed, high-end, mesh, secure applications. The biggest differentiator for LeoSat is their approach of strategic partnerships with regional GEO operators such as Sky Perfect JSAT and Hispasat  that would benefit from a complimentary service in LEO. In turn, LeoSat benefits from support from these players on landing rights and distribution. Short-term “fitness” remains the biggest question for LeoSat as they work towards lowering the overall system CAPEX.

Amazon, the last entrant, could aim at fueling existing revenue streams. It is not the first GAFAM player to announce their plans of launching a satellite constellation and will not be the last. While Amazon is considered a real and more near-term prospect compared to the others in this category due to the recent launch of it AWS ground stations services and their Blue Origin launch services, all these companies pose a threat not only due to their deeper pockets but also because they have existing revenue streams that will only increase further as their satellite constellation expands the addressable market for their existing services. This definitely ensures the survival of Project Kuiper and raises the question: How will the entrance of Amazon (and, in due time, others) impact the space economy?

LEO HTS constellations are not short-term ventures. From entry to short-term survival to long-term sustainability, each stage comes with its own set of challenges. While having good financial backing is essential to breaking the barriers to entry, differentiated strategies for revenue generation will be the key to long term success for LEO constellations.