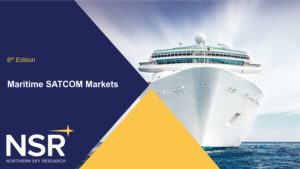 NSR quoted in ADVANCED TELEVISION – It cannot be denied that if you put three or four thousand passengers, and a near-similar number of crew, aboard a cruise ship they are going to want connectivity. A report from Northern Sky Research (NSR) says that “there are few satellite sectors that are seeing such record levels.

The evolution of technology underlies a few key trends that have the satellite industry poised for change. Advances in computing power in the Earth Observation (EO) segment have led analytics providers to enter and vie to capture new vertical markets, ranging from forestry to finance. Added to this, there is a proliferation of digital technologies.

As the end of summer nears, the cruise industry ‘big season’ is in full swing.  With over 100 new ocean-going cruise ships expected to enter the market over the next ten years, and the ‘always-on’ life-style of travelers these days – the bandwidth demand (and revenue potential) for cruise connectivity is growing significantly. From 300.

Satellite Innovation — THE Meeting Place for Satellite Executives and Professionals

SATNEWS – In session from October 8th to 11th, 2018, at the Computer History Museum in Mountain View, California, the annual Satellite Innovation will be addressing and updating a number of emerging technologies for the space and satellite market segments. Phased Array Antennas Presenter: Chris Baugh, President, NSR – Northern Sky Research.