5G and the Future of Capacity Leasing

When considering 5G, one might inadvertently focus on user-oriented characteristics such as latency or throughput.  However, the reality is that one area where 5G will be more disruptive is on the backend of networks

Pacific Telecommunications Council: OneWeb: Before and After the Bankruptcy – Winners?

The recent USD 1B investment by the U.K. government and Bharti Global for a 90 percent stake has certainly given a new lease on life to OneWeb. The oldest among the current LEO-HTS plans, OneWeb struggled to raise the remaining USD 2B funds needed to post a USD 3.4B equity raise…

Via Satellite: HAPS: A Satellite Operator’s Big Investment in the Stratosphere

“Satellites cannot exist in a vacuum. Operators have to keep an eye on adjacent technology developments and understand the new business models they might have to deal with in the future,” says Muruganandham.

The inter-play between telecom and satellite operators connecting remote points on Earth is a well-established, niche business. Telecom and satellite ecosystems have cooperated for decades as satellites adapted roles from serving international trunks, to jumpstarting Internet backbone connections in developing regions, to supporting domestic backhauling for wireless carriers. While the proliferation of GEO-HTS has made. 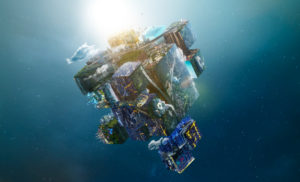 Infrastructure in the Stratosphere

Several programs from the last two decades alone promised the use of stratospheric platforms for comms and observation, most of which fell through in the end. However, recent investments and subsequent mission successes from commercial players such as Alphabet and Airbus have injected a fresh wave of hope.