The inter-play between telecom and satellite operators connecting remote points on Earth is a well-established, niche business. Telecom and satellite ecosystems have cooperated for decades as satellites adapted roles from serving international trunks, to jumpstarting Internet backbone connections in developing regions, to supporting domestic backhauling for wireless carriers. While the proliferation of GEO-HTS has made satellite backhauling more ARPU-friendly, it is still widely considered the technology of last resort due to link delay and costs. Yet, the emergence of ambitious mega-constellation initiatives comprising thousands of high-throughput satellites deployed in LEO and MEO orbits now begs the question: Can low-latency Non-GEO constellations become a mainstream, cost-effective alternative to fiber optics backhaul?

This is relevant question to ask given the unprecedented size of so-called mega-constellations and ambitious goals set by high-profile disruptors. When receiving FCC approval for its 3,236-satellite constellation, Amazon mentioned in its official DayOne blog that Project Kuiper “will (also) provide backhaul solutions for wireless carriers extending LTE and 5G service to new regions”. Starlink, which has launched hundreds of satellites and reached a manufacturing cadence of 120 satellites per month, aims to accelerate completion of its 1,584-satellite initial shell with one goal being “the rebuild of Internet in space”.

When digging into the specific cost elements of fiber and Non-GEO backhaul, it turns out that LEO and MEO backhauling can indeed become more cost-effective solutions than fiber when under a specific set of conditions involving distances to core network, number of communities to reach and –importantly– realistic projections of aggregate bandwidth demand. Deploying multi-billion dollar mega-constellations is, clearly, a CAPEX-heavy enterprise, but a proper benchmark for telco/MNO backhaul hinges on fairly comparing the present value of a potential investment project in a fiber optics network (regional/long-haul/festoon) versus leasing aggregate capacity from a managed-services satellite operator. Given the unknowns that still surround mega-constellations, a sensitivity analysis becomes a good way to conduct such assessment. 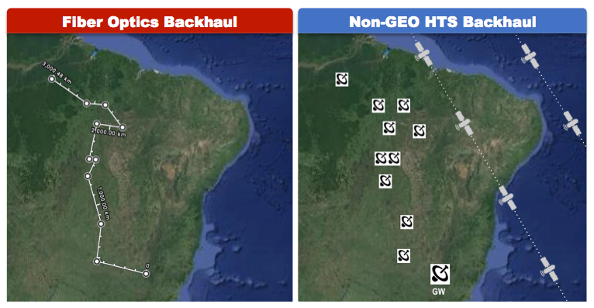 NSR’s Non-GEO Constellations Analysis Toolkit allows telecom and satellite operators to spot inter-play “sweet spots” based on factual analysis, driven by a set of configurable input variables that determine fiber and satellite viability on a case by case basis. Below is a sample case output using Tool #8 of the toolkit. This example evaluates the scenario of connecting ten remote communities with projected bandwidth requirements of 7 Gbps, requiring a fiber-network deployment of 3,000 kilometers. Fiber optics projects can vary in cost widely but, for this sample analysis, NSR has taken a rather conservative approach for fiber cost items: 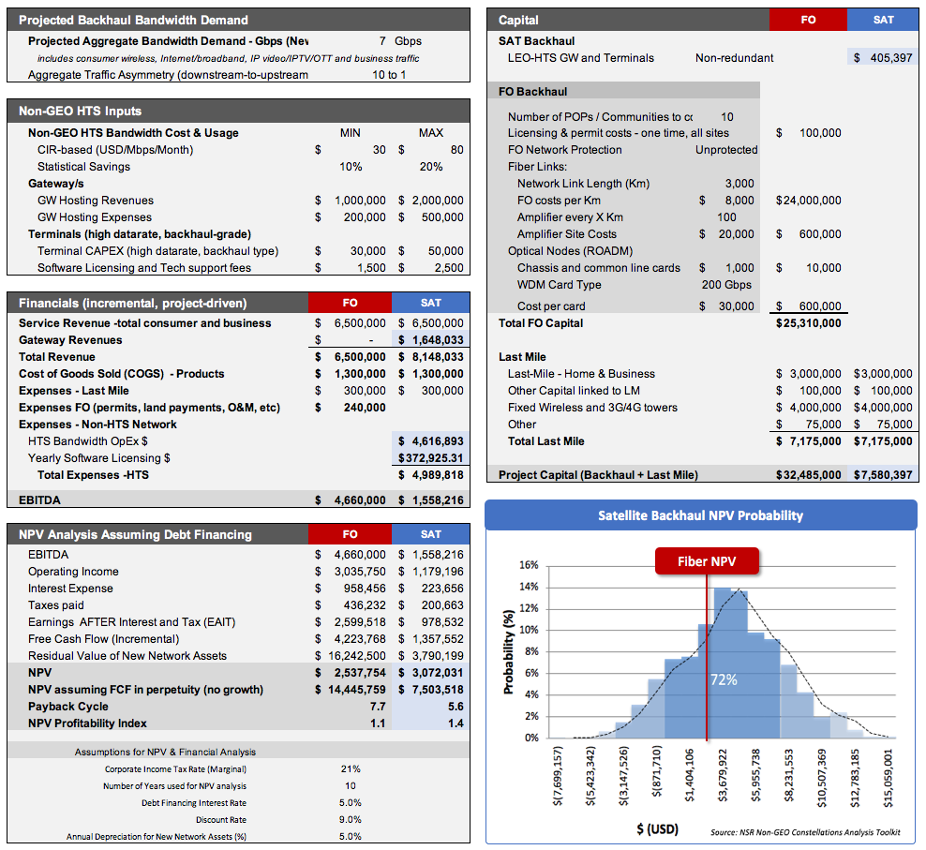 The Business Case Sensitivity Analysis included in the toolkit runs one thousand possible scenarios based on randomly generated input values. Results for the 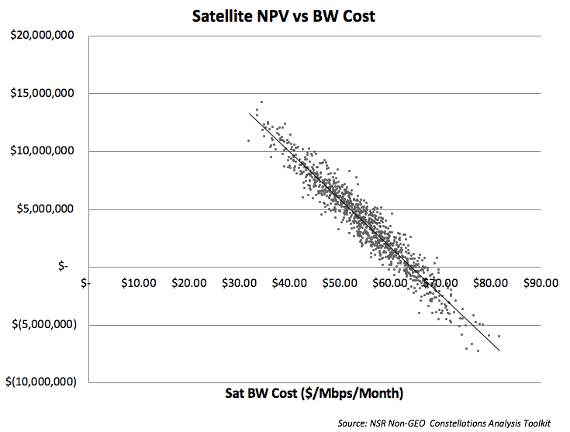 sample case show that if the telco/MNO leases 7 Gbps of Non-GEO HTS capacity to reach the 10 new communities (instead of building a FO backbone), there is a 72% chance that NPV will be between $266 thousand and $7.1 million. With the given input ranges, there is a 17% chance that (using satellite) NPV will be negative. On the other hand, considering the BC analysis and revenue projections, if the telco/MNO/MSO builds a FO backbone network, NPV is not expected to deviate much from $2.5 Million.

Naturally, the satellite business case is highly correlated (and sensitive) to the cost of capacity. NPV becomes negative for this sample case if satellite bandwidth cost is higher than $65/Mbps-Month. Also key to this analysis is having realistic multi-year projections of aggregate traffic demand, as crossing points are sensitive to such demand. The marginal cost for fiber to reach virtually unlimited levels of bandwidth is very small, diminishing satellites’ play towards very high levels of traffic demand, but the example shows that satellites can indeed become a cost-effective solution, if priced properly, when addressing a certain range of bandwidth demand and distances to bridge. Lastly note that, since the Non-GEO players are the ones making the CAPEX heavy-lifting, satellite backhaul becomes primarily an OPEX value proposition for the telecom operator. Even if satellite NPV is lower than fiber, LEO/MEO backhaul could still become a wise decision for telcos, as the NPV profitability index -quantifying the amount of value created per unit of investment – can be higher than fiber due to the lower CAPEX of the satellite network (terminals). If aggregate traffic demand projections are uncertain, an OPEX-based satellite solution would minimize the risk of investment and postpone the fiber investment decision for the future.

This is one example of many that can be simulated using NSR’s Non-GEO Constellations Analysis Toolkit, illustrating that low-delay, bandwidth-scalable Non-GEO constellations can find synergetic inter-play points with telcos and wireless carriers in the expansion of core and backhaul networks to connect the unconnected. The Toolkit also allows the simulation of satellite capacity leased on a usage basis (volume) as traffic-driven capacity leasing may also open opportunities for telecom and satellite operators to evaluate hybrid, least-cost offload and overflow traffic models across terrestrial and satellite backhaul networks.