Flexible satellites have been around for some time, but the rate and scale of flexibility has increased exponentially over the last few years. Declining GEO capacity prices, rise in competition and the need for reduced time to orbit and are just a few factors that led to greater need for software-defined satellites. As this technology develops further, it is bound to play a major role in the future of supply and demand. While grown out of necessity, the ongoing demand for flexibility is giving rise to opportunity-driven technologies as well in artificial intelligence and autonomous satellite models. But which one really drives market demand: necessity or opportunity?

NSR’s Global Satellite Manufacturing and Launch Markets, 10th Edition report forecasts over 12,500 satellites to be ordered over the next decade. The analysis for the forecast is dominated by a growing demand (and supporting supply) of software-defined satellites in the near terms for most of the applications and the introduction of autonomous satellites in the mid- to latter-part of the decade. 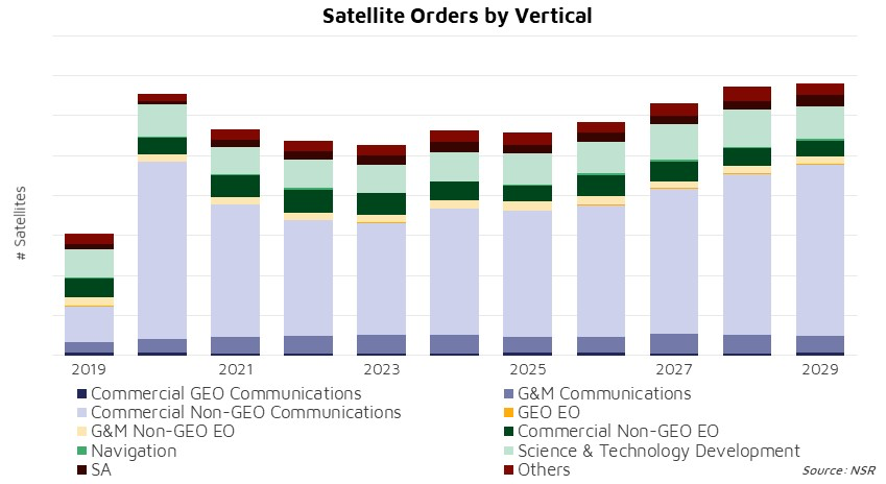 GEO communications markets have played a vital role in boosting the technology among many of the different applications it is used for. Indeed, cost per capacity sold has always been a priority for GEO operators. As more options become available on different sides of the spectrum like VHTS and small GEO satellites, price per sellable bits has become ever more important for operators to make the right procurement decision. A quick hypothetical example below illustrates this further:

Assuming a VHTS satellite (prices represented as “P” in the chart below) costs around $400M, and offers 500 Gbps, the $/kg is this case is quite low at $0.05M/kg and comes to about $0.8M/Gbps. If the operator is unable to sell 20% of the capacity, then the $/Gbps increase to $1M/ Gbps. On the other hand, a small GEO satellite (prices represented as “Pr” in the chart below), while only costing around $40M and offering 30 Gbps, would cost $0.13M/kg and $1.3/Gbps. If the operator can sell all its satellite capacity using software-defined payload, the price is comparable to a VHTS with a significantly lower CAPEX. Similarly, a significantly higher value can be achieved from VHTS in terms of capacity per sellable bits by using Software Defined Satellites. Software defined capabilities, therefore, becomes a critical factor when making satellite procurement decisions. 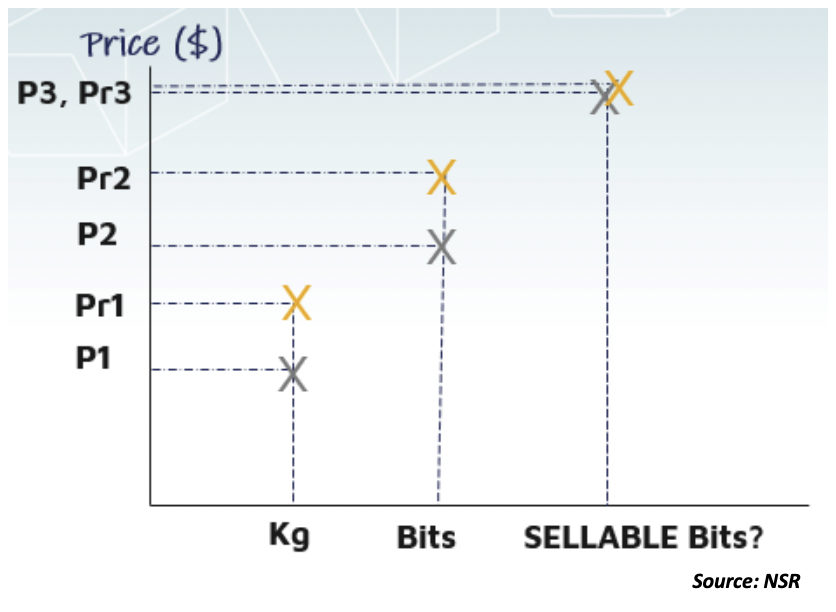 In this diverse and uncertain environment, standard software-defined satellites are coming out to be the “Goldilocks” solution. Satellite manufacturers including Airbus Defense and Space, Lockheed Martin, Thales Alenia Space and Boeing all offer standard software defined products that lower the overall manufacturing cost and time, while increasing the ability to adjust the spacecraft in orbit to changing market demand, thereby decreasing the cost-to-efficiency ratio. The trend is also being considered for other applications including Earth Observation, Science and Navigation, as well as NGEO constellations to get the most out of these high-value assets.

While one of the benefits of the software-defined approach is to standardize the product, either at the block level or at the full satellite level to lower the production cost, it is also a challenge as a certain volume of orders is required for the manufacturers to benefit from the economies of scale from standardization. There are also additional concerns regarding cyber threats associated with software defined networks. This bring us to the opportunity-driven flexible satellite models.

From GEO Communications to Earth Observation to Science, Navigation and onwards to Space Situational Awareness, AI offers huge benefits by offering better operational management of satellites in orbit for each application as well as benefits in manufacturing processes on the ground. China’s Xingshidai satellite constellation is one example of the use of AI traffic monitoring, environment tracking & reporting, and disaster prevention. On the other side of the world, Texas-based Hypergiant Industries is working on a satellite constellation of up to 36 satellites called Chameleon in partnership with the U.S. Airforce to meet their security requirements and in keeping with its name, the constellation will be capable of changing tasks as and when required.

These technologies are also expected to open new doors and further evolve applications such as in-orbit robotic manipulation and manufacturing and space mining, all of which will be crucial in the future as human exploration of space expands.

Over the last few years, as the business model for GEO satellites, especially for GEO communications applications, continues to be challenging, operators have been pushing for lower cost and more agility. This has forced the development of unique value propositions: standardized, software-defined satellites. For a relatively low cost due to standardization (where economies of scale benefits materialize), they offer operators with satellites that can be reconfigured once in orbit. Software-defined satellites can therefore be considered a necessity-driven technology in these cases.

But with a number of LEO constellations and the growing interest in space exploration growing, in addition to cyber threats from software defined satellites, opportunities for new technologies like automation and artificial intelligence will come to augment existing software-define satellite models, and fill the gaps.

Applying the same reasoning as the concept of necessity- versus opportunity-driven entrepreneurship, the business models associated with flexible satellites allow to better understand that necessity and opportunity are two major drivers that in tandem will lead the satellite supply and demand models going forward.