During the Connected Aviation Intelligence Summit virtual panel on 9 June 2021, executives from SpaceX, OneWeb, and Telesat forecast that most IFC capacity will come from Low-Earth Orbit systems over the next decade. SpaceX and Telesat executives expressed higher optimism that LEO will claim 90% or more of IFC services by 2030. This begs the question, is the IFC market pie large enough for newer players? And how quickly can new entrants disrupt the incumbents?

The aero market landscape is shaping up through horizontal consolidation and vertical integration across the value chain. While COVID-19 accelerated this trend, it is not out of place to say that the market was headed in this direction pre- COVID-19. For example, in October 2019, ST Engineering iDirect acquired Newtec to claim over 45% market share of IFC modems in-service units. 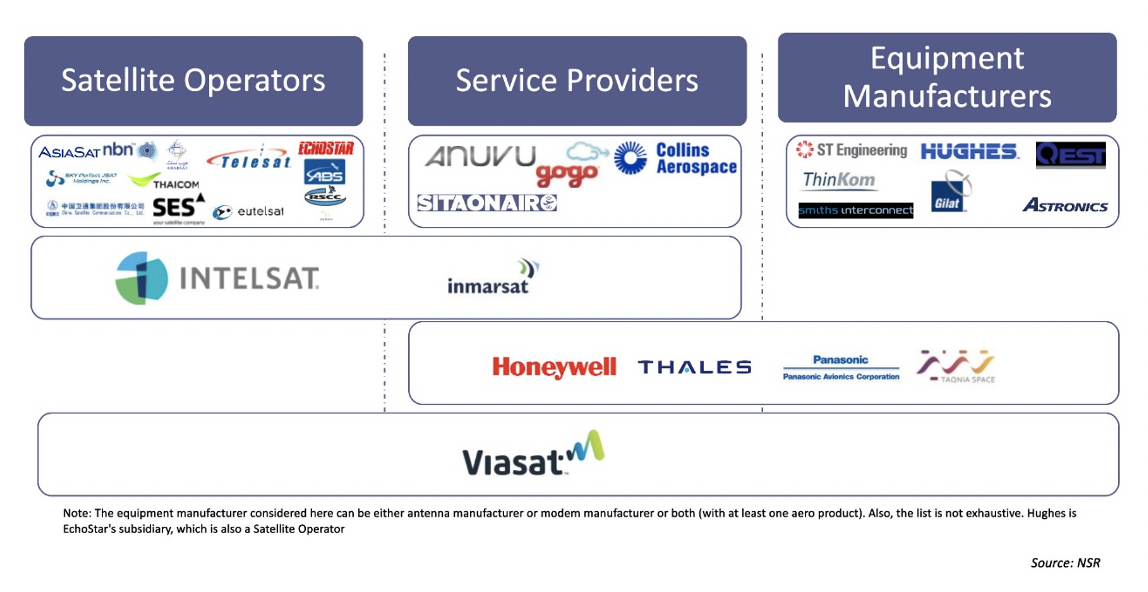 One irreversible and accelerating trend is the shrinking role of middlemen in the service provisioning business as the IFC market gravitates towards achieving more pricing and network efficiencies. As a result, satellite operators are moving down the value chain while service providers are moving up through ownership of dedicated payloads or outright investment in new satellite systems. Panasonic’s third-generation network features a mix of leased capacity and dedicated extreme high throughput (XTS) payloads onboard APSTAR-6D satellite launched in 2020 and Eutelsat-10B planned for launch in 2022.

Intelsat’s acquisition of Gogo’s commercial aviation business in 2020 further upended the IFC market landscape. Gogo is one of the industry’s largest service providers, buying capacity from Intelsat, SES, Eutelsat and Telesat. Intelsat has retired the Gogo CA brand and is going all-in as a vertically integrated IFC service provider. The implication is that Intelsat will likely fully utilize its satellite capacity at the expiration of current Gogo’s leases, pushing the case for other satellite operators to seek alternative distribution.

Similarly, Anuvu (formerly Global Eagle) has emerged from bankruptcy and recently announced plans to move up the value chain by investing in a constellation of eight micro-GEO satellites in partnership with Silicon Valley-based Astranis. The first two microsatellites planned for launch by early 2023 are dedicated to Anuvu’s aviation and maritime customers and will provide coverage over North America and the Caribbean.

The accelerated vertical integration trends reflect the underlying changes happening in the IFC market, arising from three key factors: intensifying competition, airlines demanding more improved user experience, and the transition from limited ‘pay-per-megabyte’ contract options to what Emirates VP of Customer Experience Patrick Brannelly described as ‘all-you-can-eat’ packages. These three factors are interconnected, given that growing competition is pushing airlines to demand better service and more contract flexibility from service providers. As a result, large airline groups are contracting more than one service provider for different aircraft families and routes.

Given the early stage of the LEO service deployments, it is still speculative to forecast LEO’s ramp-up rate in most market verticals, even more theoretical in the IFC market where several factors play critical roles across the value chain. However, recent events and announcements provide some clues to ongoing IFC product developments and market activities of LEO constellation operators. For example, SpaceX in a recently amended filing to the Federal Communications Commission (FCC) has requested for authorization for up to 500 earth stations aboard aircraft. In a June 25 tweet, Elon Musk disclosed that SpaceX is “focusing on B737 & A320, as those serve most number of people, with development testing on Gulfstream.” SpaceX’s VP of Starlink and Commercial Sales Jonathan Hofeller confirmed that SpaceX is already in talks with “several airlines.”

Similarly, OneWeb announced in March 2021 that it is working with SatixFy UK to develop new multi-orbit IFC terminal for its LEO offering as well as GEO satellite networks. With OneWeb expected to begin offering its IFC service by late 2022 and early 2023, it is still unclear how the UK-based operator intends to approach the market. “Later on this year, we’ll really ramp up that activity with our potential airline customers, and with our distribution partners as well,” said OneWeb’s VP Mobility Services Ben Griffin in a recent interview. This suggest that OneWeb will sell its “IFC solution” through a “couple of distribution partners”, indicating a hybrid model that bridges vertical integration and the traditional whole capacity sale.

Telesat is another LEO constellation operator in the running for the aero satcom market share. With years of experience selling capacity to IFC service providers, including Panasonic, Gogo and Anuvu, it is not surprising that the aero market is one of the key verticals for Telesat’s Lightspeed LEO constellation offering. However, it appears the Canadian legacy operator may move closer to airlines as market trends evolve. Telesat’s Director of Commercial and Product Development disclosed in August 2020 that the company is having “interesting discussions” with major airlines around the world. Also, Telesat is working with Anuvu, a long-term IFC partner, on Airconnect Ka solution over Lightspeed constellation.

Looking toward the mid to long-term, the IFC market as with the rest of the mobility segment is set to become the most competitive satcom vertical for both GEO and Non-GEO players. The competition is driven in part by the expectation that inflight WiFi and connected aircraft demands will flourish over the next decade. Although the market was hard hit by COVID-19 in 2020, NSR’s Aeronautical Satcom Markets, 9th Edition report projects that total IFC Retail Service and Equipment Revenues will grow from $1.3 Billion recorded in 2020 to $6.5 Billion in 2030, with upcoming capacity influx unlocking the demand elasticities, free service model and rapid migration to High Throughput Systems as significant growth drivers.

Any space for new players? 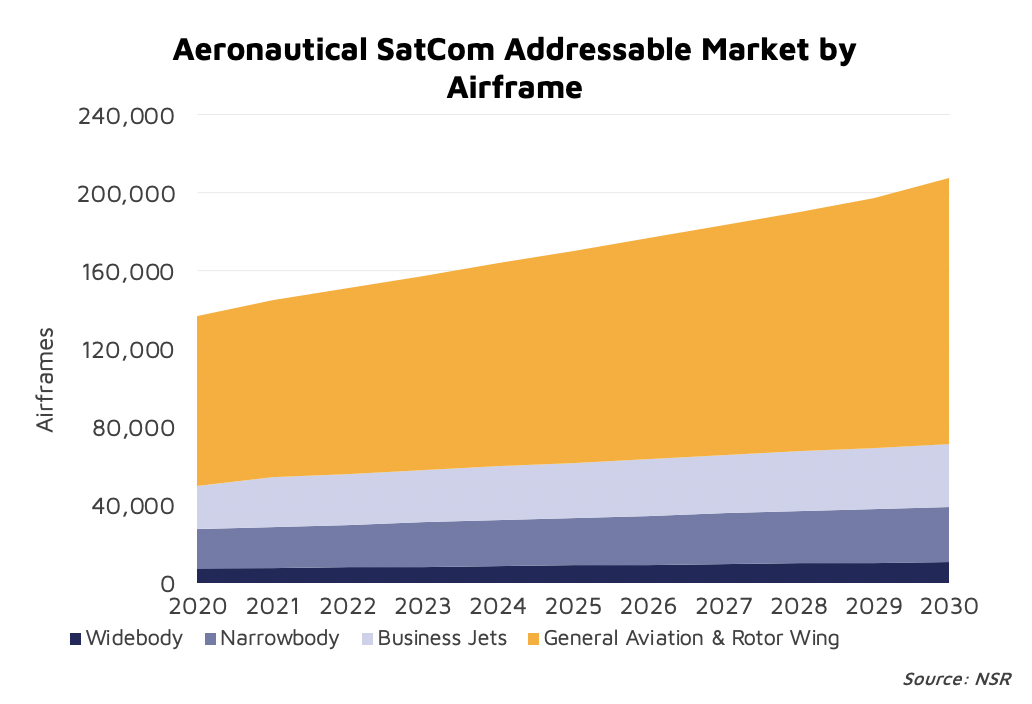 There is no doubt about the growth opportunity in the aero market. However, the changing market landscape indicate more players will compete against the same opportunity. The IFC market poses two significant peculiarities: take up rate for passenger and crew WiFi alongside operational connectivity are expected to grow exponentially. However, addressable market is constrained to lower single digit growth. For example, there are about 7,353 widebody aircraft units in 2020 which is expected to grow to 10,551 units by 2030 at a 3.7% CAGR. This challenge leaves the opportunity for a non-proliferated number of players to fully capture the revenue potential by optimizing for efficiency across the value chain.

In fact, with more GEO VHTS and LEO capacity supply expected within the next decade, a proliferated aero satcom market will become less attractive for service providers because margins will decline, and since the growth of in-service units is insufficient, the benefits of scale that hedges price declines will be limited. 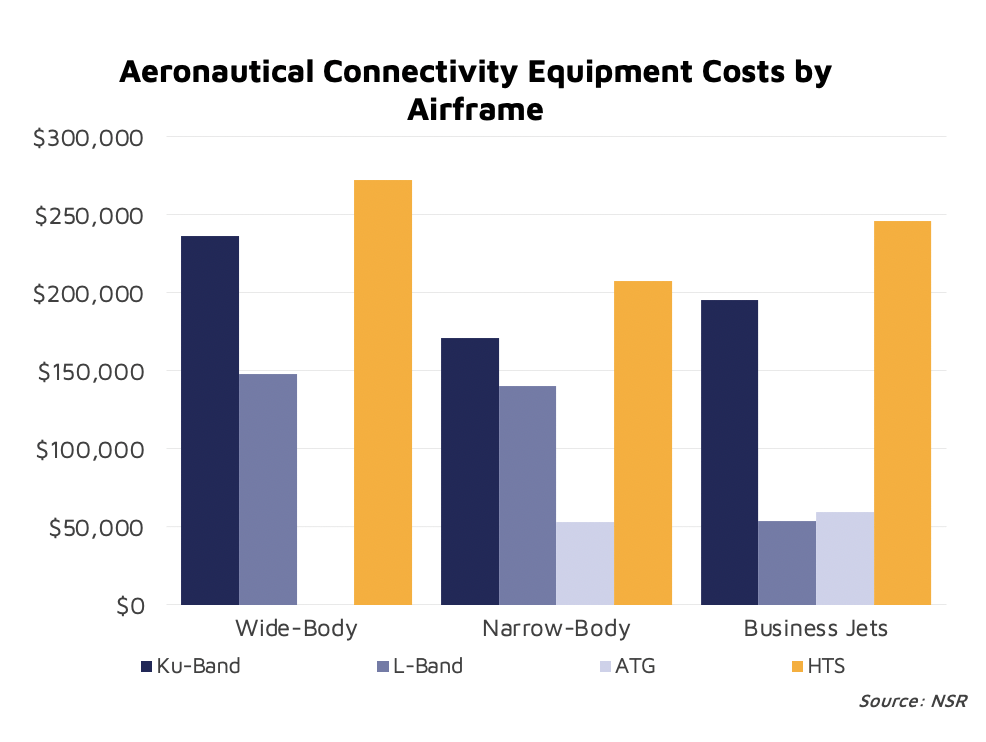 Proliferation of vertically integrated service providers/operators in the aero market will be beneficial to airlines and end users. However, the benefits of scale will marginally decline as the total addressable aircraft unit is limited.

Airlines are risk averse and the IFC market is highly sticky due to switching cost, aircraft lifespan, regulatory requirements and certification processes. Increased competition will help airlines have multiple options. However, switching cost will need to significantly reduce before churn rate can accelerate.