The Asian satellite telecomm market has for some time been relatively fragmented. Several countries with comparatively small populations, or comparatively small economies, or both, have launched their own satellites, with these programs having varying levels of commercial motivation. However, due to spectrum rights and legacy of the Big Four, among others, these national players have historically represented a relatively small piece of overall capacity supply in the region.

Moving forward, however, this will change. As discussed in NSR’s Global Satellite Capacity Supply & Demand, 14th Edition, APAC in particular finds itself on the cusp of a sizeable increase in the number of nationally-owned satellites, which, in the age of closing of markets and increasing nationalism, could cause increased challenges for foreign operators attempting to enter fast-growing Asian markets.

Overall, 2017 has been, and 2018-2020 will be crucial years for the advancements of several countries’ national space programs. A growing number of countries are procuring their own satellites, either through national governments or through telcos that are themselves owned by governmental agencies. The coming few years will see satellites launched for IndoSat and PT Telkom in Indonesia (the state owns large stakes in both companies, though in the case of IndoSat, the government of Qatar maintains the largest stake) and the government of Bangladesh. Beyond this, China and India have been rapidly developing capabilities to manufacture HTS indigenously, with ChinaSat-16 having been launched in early 2017, and GSAT-20 to be launched next year.

The ability of China and India to manufacture HTS is expected to have implications beyond these two countries. In an age of increasing nationalism and rising impetus for countries to be “self-sufficient”, particularly in key industries such as telecoms and national security, the ability to procure satellites that can address broadband/backhaul requirements becomes increasingly attractive.

The Impact on Demand

Despite a potential avalanche of HTS supply coming into the market, this does not necessarily spell the end for commercial operators in the region. Up to this point, larger amounts of capacity in Asia have meant highly elastic demand. Indeed, operators such as O3b (now a part of SES Networks) have seen Gbps of demand coming from APAC in verticals such as backhaul.

Moving forward, NSR expects the above-mentioned satellite programs—in particular those procured by Telkom and IndoSat—to be integrated into wireless networks. Ultimately, it could be a net benefit that telcos are procuring HTS—since this will, almost by definition, force the hand of these telcos to adapt their technological development towards integrating HTS capacity into their backhaul networks. With this in mind, operators trying to address these verticals are likely to see spillover demand from telcos that are filling gaps in their wireless networks with existing capacity. 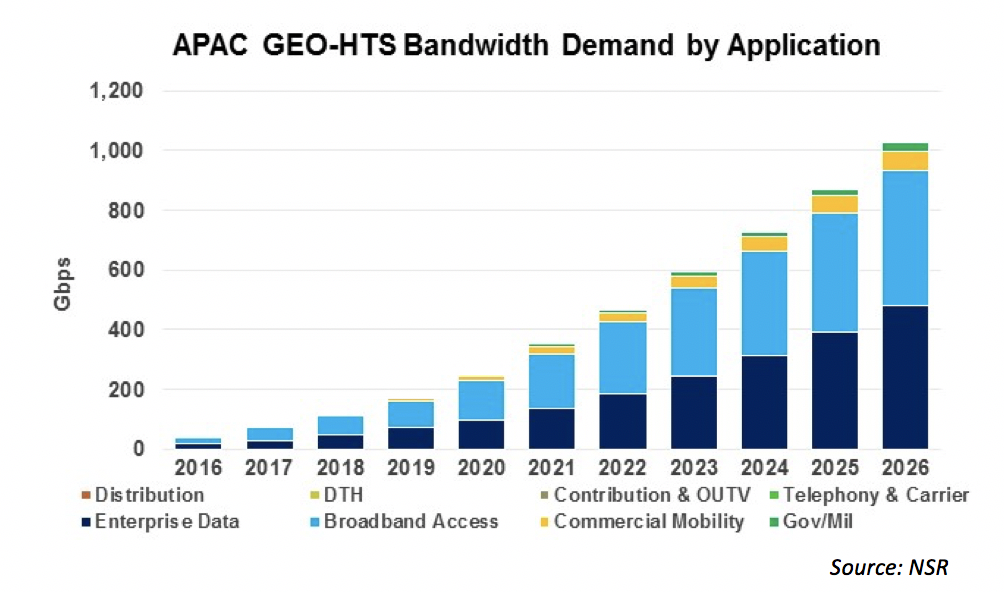 NSR expects total GEO-HTS demand in APAC to exceed 1 Tbps by 2026, with the majority of demand being driven by enterprise data (of which the largest component is cellular backhaul) and consumer broadband. Despite capacity being sold at a significantly lower price point due to more purchases in bulk, NSR sees total APAC GEO-HTS revenues rising to nearly $4 billion annually by 2026, with broadband access and enterprise data representing around $1.5 billion each. Recently, the business case for consumer broadband in middle-income markets has been, to an extent, validated by players such as Hughes in Brazil, which has seen ~70,000 subscriber additions within the first year of operations. Moving forward, as more HTS capacity is launched over APAC, the region’s upper-middle class is expected to provide a significant opportunity for consumer broadband services.

Another market of note includes commercial mobility. Driven by in-flight connectivity, the market is expected to grow to ~$600M in annual revenues by 2026. A recent forecast by Boeing for airplane demand in the Chinese market indicated that airplane demand expectations have increased over the past year, and the expectation remains that air travel in APAC will continue to flourish over the coming decade. Despite regulatory hurdles to be overcome in some markets (India, China), it is seen as a matter of when, rather than if, the IFC market sees an explosion in demand in APAC. In particular, commercial mobility/IFC are not expected to be as addressable by the above-mentioned national satellite programs, due to the fact that these satellites tend to be country-focused or at best, regional-focused, whereas mobility demands tend to be more global, or at least multi-regional in nature.

The next several years will see an increase in domestic satellite programs in APAC. The region’s three most populous countries—China, India, and Indonesia- are leading a charge of procuring satellites for domestic companies to address domestic demand, and this is expected to make life more difficult for foreign operators in these countries.

However, as more supply comes online and is integrated into telco networks, NSR expects the general applicability of satellite for several demand verticals to increase. One of the main challenges for satellite today is educating end consumers that the price of capacity is no longer necessarily prohibitively expensive, and by having telcos launch their own HTS payloads, it is expected that satellite will see a bigger role to play in the greater telco infrastructure in APAC.