This week saw the successful launch of the fourth Inmarsat Global Xpress satellite. This launch was noteworthy because the company, by virtue of successfully launching the first three, has already achieved global HTS coverage. The coverage of the fourth—planned to address areas of high demand—has been a topic of much speculation over the past year or more, with Inmarsat CEO Rupert Pearce noting last week that the satellite could potentially see its mission changed during its in-orbit life, but that it will initially be placed over Europe, Middle East, and Africa. As discussed in NSR’s Satellite Operator Financial Analysis, 7th Edition, this is the continuation of a period of elevated CAPEX for Inmarsat, with the company expected to continue adding capacity in the form of its Inmarsat-6 duo of satellites. As discussed in the SOFA-7 study, the company was initially planning to launch the satellite over APAC, but these plans changed markedly due to a combination of geopolitics and market conditions that are coming to a head today. 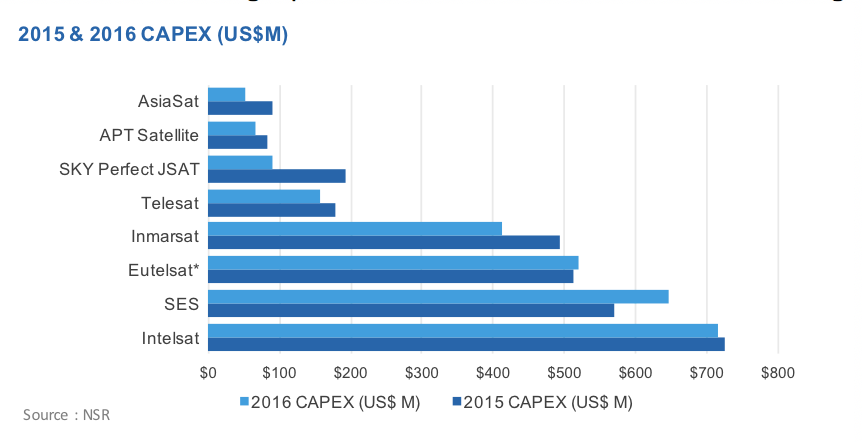 This is in fairly sharp contrast to late 2015, at which time Inmarsat was welcoming Chinese President Xi Jinping to the company’s offices in London, announcing the establishment of a framework that could see a deal that was, at the time, rumored at the time to be for 15-years and hundreds of millions of dollars for a “New Silk Road” (also known as One Belt, One Road, or OBOR) mobile communications agreement. Up to this point, Inmarsat has been kept waiting for a windfall deal as part of China’s $40 billion “New Silk Road” fund, or the $122 billion pledged infrastructure investment at the recent Belt and Road Forum in May 2017. 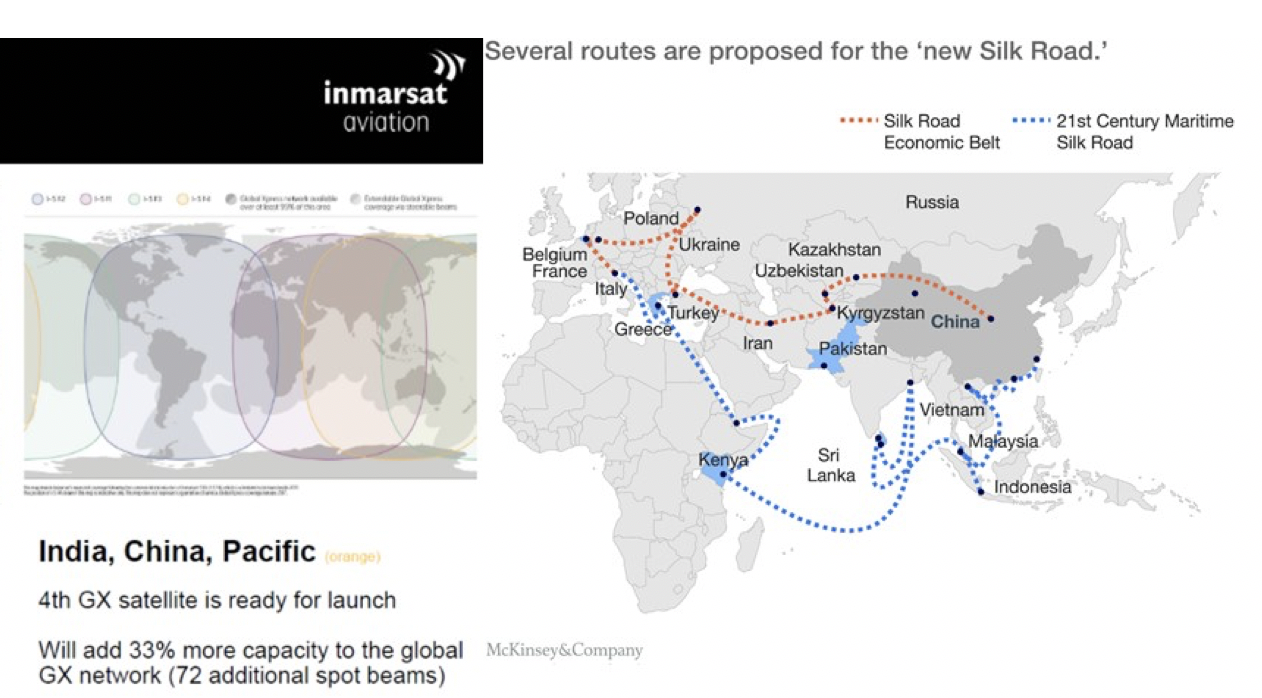 Which brings us back to Inmarsat’s successful launch of Inmarsat 5F4 this week. It is reasonable for Inmarsat to assume that mobility demands in greater APAC will grow at a robust clip. The Belt and Road initiatives involve significant amounts of trade via land, sea, and (to a much lesser extent), plane. These are all verticals that Inmarsat with Global Xpress should be particularly well-suited to address, with some of the shipping routes at left showing the diversity of coverage required. The question, therefore, is what has kept Inmarsat from following through on its initial plan to launch the 4th Global Xpress satellite over Asia? The company has, as recently as earlier this year, shown in presentations an APAC-centric coverage map for the 4th satellite, such as the map at right, and it is therefore somewhat surprising they would decide to launch the 4th satellite initially over EMEA, even if, up to this point, the company is seen as having done quite well in these markets with GX. In light of recent industry and macroeconomic events, however, the move makes somewhat more sense, and may not bode well for Inmarsat.

Inside the Mind of the Politburo

There are two major factors here that ultimately may be working against Inmarsat, if the medium-term intention is in fact to move the satellite over APAC and address mobility demand related to OBOR and/or the region’s IFC markets. These two factors are 1) China’s push towards handling ever-more-complex space matters domestically, and 2) China’s push towards exporting high-tech goods and services in the future. In short, space is sexy in China today, and the country’s government sees a strong space program as a combination of supporting technological leadership in a key industry and slick party propaganda, with a strong/strengthening space program playing into the greater narrative of a strong/strengthening China. The country is therefore pushing towards developing more space/satellite capabilities domestically, with this including, but not limited to, the nation’s first HTS launch earlier this year, the nation’s first sale of an HTS to a foreign customer (Thaicom) in late 2016, and the nation’s first apparent “OBOR-related” satellite sale with a potential 2x deal with Indonesia earlier this month.

Beyond the above-mentioned “firsts”, China has seen several domestic players make moves to address the mobility markets via GEO-HTS, with some of the plays looking similar (albeit less local) than Inmarsat’s. This includes APT Satellite’s Ku-band GEO-HTS system, which is initially planned to be one satellite targeting APAC (Apstar-6D, for launch in 2019), and potentially several more aiming for global coverage. As discussed in NSR’s SOFA7, APT Satellite is in excellent financial condition given its low degree of leverage, and thus would be likely capable of pursuing a program should demand prove to materialize. Overall, the implication here is that China is likely to prioritize domestic capacity for its mobility needs, with this already being the case in video broadcast, VSAT networking, and any other verticals that ChinaSat (and to some extent APT Satellite) is able to serve.

The Impact on Greater APAC Supply

Perhaps more significant, however, is the potential impact on the overall APAC supply/demand balance. Ultimately, it appears that satellites for “broadband connectivity” purposes have in many instances become a politically acceptable way of spending infrastructure/R&D funds, and China has recognized that there is a market here, even more so if Chinese Ex/Im-type loans are oftentimes paying for these satellites, backed by natural resources or some other tangible good. This could radically alter the supply picture in Asia-Pacific, with the recently announced satellites over Indonesia claiming over 100 Gbps of capacity, according to a presentation at the recent APSAT conference.

This capacity is oftentimes country-focused, or at most region-focused, but the impact on supply/demand balances within these countries or regions can be significant. Conservatively speaking, total GEO-HTS Ka-band supply over APAC will reach 900 Gbps by the end of the decade, though with much of this being government-launched satellites, including NBN (160 Gbps). While demand may be robust when considering government-mandated programs with subsequent government funding, this funding will also factor in on the supply side, with countries like Myanmar and Bangladesh being involved in various stages of satellite programs. Ultimately, operators will need to find some way of differentiating their capacity in a market that is becoming increasingly crowded, with some of the entrants not playing purely for profit.

The launch of the 4th Inmarsat Global Xpress satellite occurred at a very busy time for the satellite industry in Asia Pacific. Late 2016/2017 has already seen the order of JSAT-18/Kacific, the purchase by Thaicom of an HTS on behalf of a client, the firm purchases for national satellites/private-public-partnership schemes for Indonesia, and the first HTS launch for China (with another planned next week, with 70 Gbps of capacity). In addition to this, we saw just last week the involvement of Sky Perfect JSAT in LeoSat’s constellation plans with an investment of $100M. What is more, SoftBank of Japan is undoubtedly the industry’s biggest investor as of late, with a $1B+ investment into OneWeb, and a potential $1.7 billion on the table as a proposed investment into Intelsat.

Inmarsat’s 4th GX satellite is likely to remain over EMEA until the company obtains some bulk lease within APAC/China, along the lines of the rumored government contract linked above. Given the increasing tendency for China to launch higher throughput capacity—and to finance other countries in APAC to do the same—it may be more difficult than originally assumed to find a lease that would justify such a move. In an industry known to be fairly stable, the satellite telecommunications industry in Asia is more volatile than ever today.