Bulking Up the Business Case for GEO-HTS

The phrase high throughput satellite can at times understate the extent to which HTS technology is indeed a great leap forward for satcom. Traditional FSS wide-beam satellites have tended to see a capacity of around 20-50x 36 MHz transponder equivalents (TPEs), which equates to between ~1 and ~5 Gbps of capacity. High throughput satellites, on the other hand, oftentimes see capacity exceeding 30-40 Gbps, and in some instances capacity of over 100 Gbps.

Clearly, if all capacity is created equal, and if pricing were to remain stable, HTS would be an absolute boon to satellite operators everywhere—this is even more pronounced given the fact that the cost to manufacture and launch HTS is generally not that much more than traditional FSS, which is generally ~1-1.5x the cost. However, the world we live in does not work as such, in the sense that not all capacity is created equal, and prices are far from stable. Rather than being a boon for satellite operators, HTS has instead complicated the market, leading to overcapacity and falling prices. This has complicated “build it and they will come” HTS business models, such as Avanti, which has found that offering cheap capacity post-launch on the open market is not a business model for success. This therefore begs the question of, how can satellite operators best monetize these significantly larger, but not that much more expensive assets?

How to Address These Challenges?

The most apparent way for a satellite operator to address the challenges of HTS is to bulk lease HTS capacity, ideally pre-launch. This presents some challenges as well, namely the decrease in bargaining power a satellite operator will see if a telco or service provider is responsible for delivering the capacity to the customer, with this likely leading to a large decrease in price paid for capacity. However, with the massively increased scale of HTS, even dramatically lower prices can and should lead to an increase in revenues. As discussed in detail in NSR’s Global Satellite Capacity Supply & Demand, 14th Edition, GEO-HTS supply will outnumber GEO-FSS supply by a factor of approx. 10:1 by 2026 (from around 1:1 today). 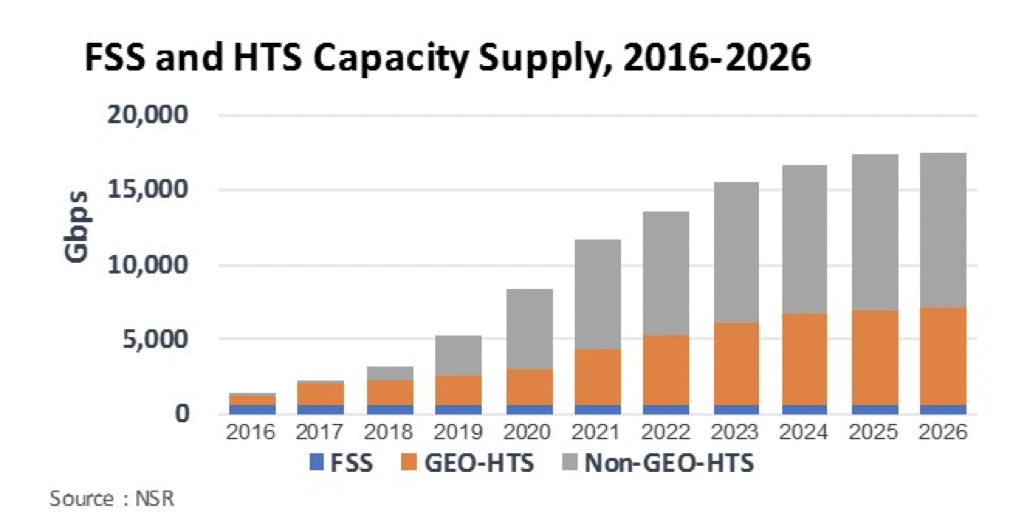 To take a real world example, late 2015 saw the pre-launch lease of the entirety of Telesat’s Telstar-19 South America GEO-HTS coverage to Hughes Network Systems. The 15-year contract obliges “Telesat to deliver Ka-band capacity of 31 Gbps on Telstar 19 Vantage” (bold added for emphasis). To put into context the extent to which 31 Gbps is an extraordinarily large number for satellite operators, we can look at the data from NSR’s Satellite Operator Financial Analysis, 7th Edition, which finds that the average annual revenue per satellite across ~25 satellite operators was around $42M per year for the 2012-2016 period. Using this as a baseline, we can play with Telesat’s 31 Gbps number to ascertain an approximate required price per Mbps. 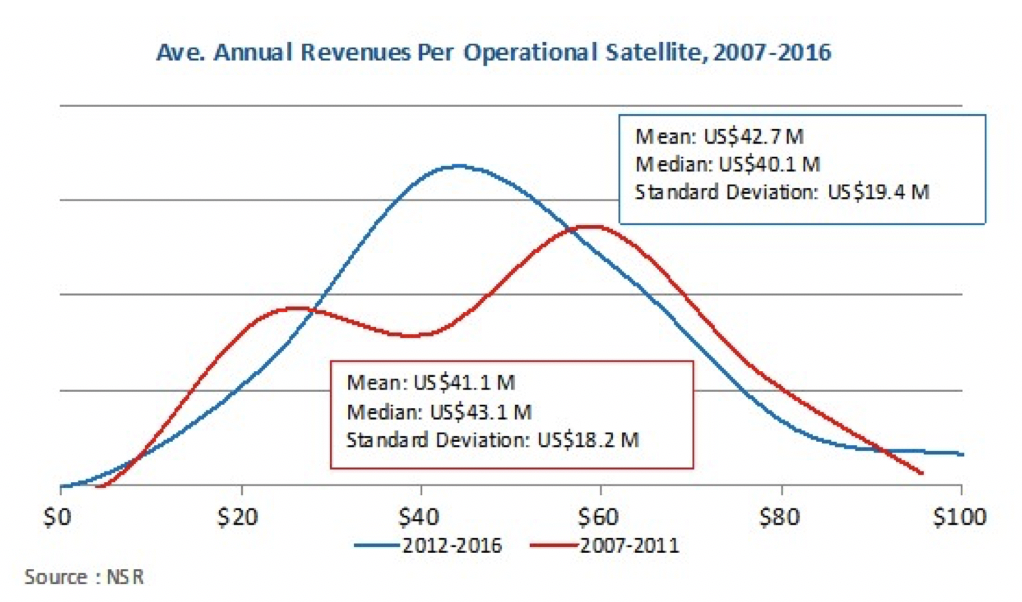 If we make the generous assumption that the above-mentioned contract involves Hughes leasing all 31 Gbps every single month for the entire 15-year lifetime of the satellite, we arrive at a price of $113 per Mbps per month to reach $42M per year in annual revenues (see below): 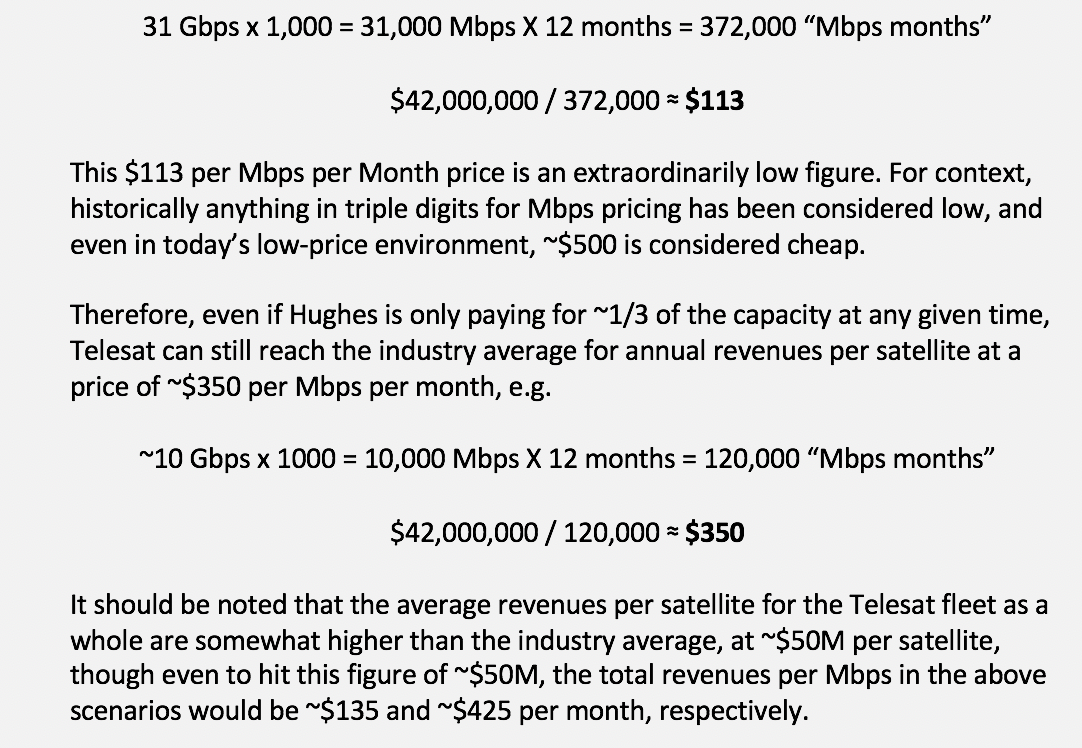 The above example is far from the only one of a satellite operator bulk leasing a large amount of an HTS payload pre-launch, and as the above arithmetic shows, there is room for what would be considered a large “wholesale discount” to a telco or other distributor. Other examples of this type of business model include SES bulk leasing much of the HTS capacity onboard SES-14/15 to IFC provider Gogo, Hughes do Brasil buying the entire Eutelsat 65 West A HTS payload over Brazil, and Gogo leasing a large amount of Intelsat EpicNG capacity for IFC. Last but not least would also include the ill-fated Facebook bulk lease of Amos-6 capacity that went up in flames in September 2016 in a pre-launch explosion, but the bigger picture takeaway is that HTS opens big and scalable markets.

The implementation of HTS capacity has already disrupted the market for satellite capacity in more or less all regions. As NSR reported in its Satellite Capacity Pricing Index, 3rd Edition, prices have fallen dramatically over the course of the previous few years, and moving forward, this trend is expected to continue.

However, lower pricing does not necessarily equal lower revenues, with the total addressable market growing markedly. In a world increasingly dominated by HTS, the keys to success for satellite operators will lie in being able to sell capacity in bulk, while maintaining a degree of bargaining power and value-add. In the instance of operators like Avanti, which has pursued an “if you build it, they will come” strategy, the message is clear—satellite operators need to design GEO-HTS (or Non-GEO-HTS) payloads with anchor clients in mind, or ideally, with pre-committed anchor clients helping to design the system itself. What was considered a “nice to have” in the satellite industry historically is increasingly becoming an absolute necessity for success.