With Space Logistics, LLC (Orbital ATK) landing its 2nd customer and Effective Space Solutions its 1st, interest in In-Orbit Servicing (IoS) is making a comeback, conceivably to stay this time. In theory, IoS presents diverse opportunities, from extending satellite life and transporting it to the correct orbit in the near term, to repairs and potentially in-orbit assembly in the long haul. Yet, as demonstrated by previous unsuccessful efforts, IoS does come with its share of challenges. The lack of a strong business case, mostly due to significant initial investment required, is one of the most acknowledged factors to have attributed to the demise of IoS efforts historically. While its full potential is yet to be realized, the persistent attempts to make IoS a reality against significant financial risks involved, makes for a compelling discussion.

The most ‘tangible’ advantage of IoS life extension comes in the form of deferred CAPEX. Replacing a satellite in GEO can leave a significant-sized void in financial statements, and IoS offers operators capital flexibility in as well as fleet management. It unravels opportunities for dispersed launches, scheduled delays and efficient financial resource allocations, all of which help develop a sustainable business model. That being established, the question remains: Do the potential benefits expected from IoS outweigh the financial risks?

NSR’s In-Orbit Servicing Markets report provides a comprehensive analysis on the subject, with financial case studies targeting just that question. To quantify the benefits of the delayed CAPEX, let’s investigating the case of a GEO-HTS satellite with the expected end of life in 2021. The chart below compares the Return on Capital Employed (ROCE) for the satellite replacement option against that for the life extension service alternative. This analysis assumes a 5-year life span for the life extension service, starting in 2021. The revenues and associated operating costs for the two options are estimated to be different for this case study, with the replacement satellite utilizing the latest developments in technology and targeting new markets. 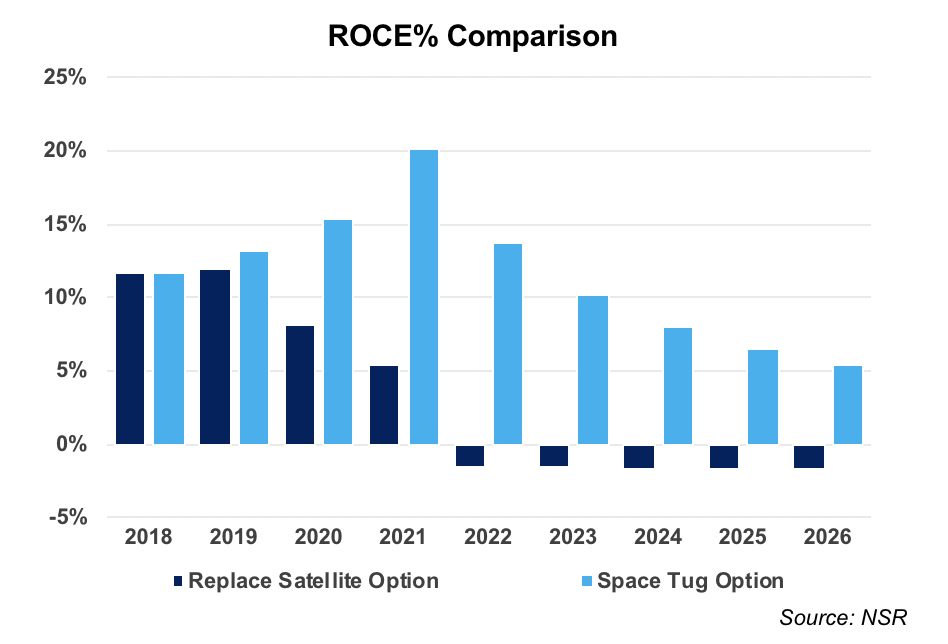 The difference in total investment between the two scenarios is computed to be over USD $240 million in favor of the life extension option over a 3-year payment period from 2019 to 2021. The overall decreasing trend for ROCE for both cases is predominantly due to the forecasted decline in revenues for the vertical and the region in which the satellite operates. As the original satellite is fully capitalised by 2020, the plunging equity causes ROCE for the life extension service to peak in 2021. On the other side, the steep decline for the replacement satellite scenario during this period is a result of the sluggish recovery in the cash flow after significant CAPEX payment hits in the preceding years.  Although the absolute figures for the replacement satellite option are considerably lower than those of life extension service, the ROCE growth rate for the former is noticeably higher. This can be explained by one dominant factor – procuring a new satellite is an investment towards an asset with >15-year life span, in contrast to IoS which, by definition, is a service and therefore not a contributing element towards the company’s equity.

Capital expenditures play a significant role in the assessment of a company’s financial health with a direct impact on its bottom line. For satellite operators, the cost of manufacturing and launching satellites accounts for most of the CAPEX pie. As such, the opportunity to save, defer or reduce this cost – if satellite revenue is not significantly compromised – makes In-orbit Servicing an unquestionably lucrative service for the operators. By delaying procurements, IoS also allows satellite operators to benefit from the latest in the technology life cycle as well as evaluate new orbital positions prior to committing to extensive investments. Not only does it offer the option to spread out the CAPEX payments for a more balanced financial statement and a cost-effective business case but primarily, IoS acts as a risk mitigation strategy for the capital investments that must be made.  IoS is not for all operators and satellites, and is certainly case specific; however, it is an increasingly attractive option in a CAPEX constrained market.