In late-February 2018, the China Aerospace Science and Technology Corporation (CASC) announced plans to build a constellation of 300 small satellites in LEO for global communications and other services. The Hongyan (translated as “wild goose”) constellation, which is targeted to be operational by 2021, was originally designed for 60 satellites. The current plan expands to 300 satellites reportedly due in part to a deal with Thailand Kasetsart University and the China Great Wall Industry Corp, a CASC subsidiary.

What is or Will be Hongyan’s Impact on the Satellite industry?

The most visible or at least, the most talked about LEO contenders stem from the U.S. and Canada, numbering at least 11 with planned satellites to be deployed at around 18,000. Hongyan’s 300 satellites certainly pale in comparison to programs that include SpaceX, Boeing and OneWeb that have filed with the U.S. Federal Communications Commission (FCC), largely targeting broadband access services in efforts to bridge the Digital Divide. 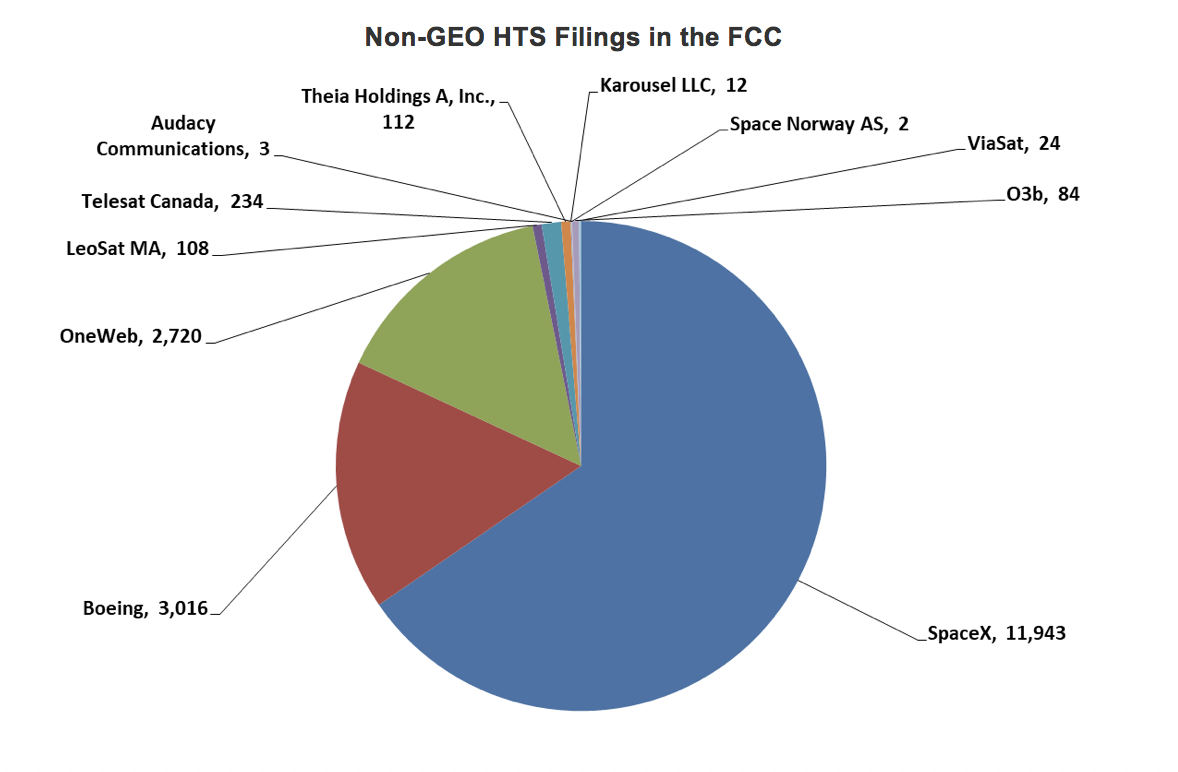 Non-GEO HTS Filings in the FCC

In terms of market access, the “FCC Players,” as depicted in the graph above, will likely position the U.S. as an anchor market, and the Rest-of-the-World could be regarded as secondary targets. Developing regions are always considered given the need for connectivity; however, the business case still needs to be closed as market dynamics do not support a U.S. or Western-style approach. For instance, ARPU levels in the U.S. cannot be applied to Africa given the macroeconomic conditions of many countries.  Yes, the A and B socio-economic groups can be targeted and are the low-hanging fruits, but to truly support an ROI model that reaches the masses, ARPU levels in Africa (and other low-income populations around the globe) must decline to very low levels to make the service affordable.  And let’s not forget equipment costs, which are also a prohibitive expense that must be included in the equation.

The “FCC Players” primary markets will likely not be threatened by Hongyan as it will likely not gain market access in the U.S. and Canada. In fact, Hongyan is not looking to provision services or compete in the U.S. and Canada anyway. Instead, China is looking at Eurasia via the “One Belt One Road” (OBOR) initiative as well as African and Latin American countries as part of its soft power projection and overall thrust of gaining economic, political and security ties with an ever expanding number of countries that are willing to be part of its sphere of influence.  So, the question is, can China’s Hongyan constellation change the market dynamics such that low ARPU can be achieved as well as equipment costs be made affordable?  We don’t know as China has not released many details of its satellite programs and its go-to-market strategy. But what we do know is that China has made deals in Nigeria and Bolivia (and will likely make other deals outside the OBOR footprint) where financial arrangements have made procurement, launch and satellite service provisioning possible.

And here is where the threat lies for the “FCC Players.”  Hongyan will not apply U.S. or Western-style market penetration strategies but follow or create a new market dynamic where pure market forces will not be applied.  In a sense, China will change or un-level the playing field. These can or will include financing packages that minimize risks to their “clients” that will favor Hongyan over offerings made by the “FCC Players” based on traditional or Western-style ROI strategies in Eurasia and other low income countries across the globe.

China’s space program and satellite communications initiatives, including the deployment of Hongyan, are not based on Western-style market economics. In fact, it can be argued that gaining positive ROI is not the end goal of China’s space program but primarily the projection and increase of its power and influence across the globe.  The side effect of this is to potentially undermine the value proposition of Western players that go by traditional market rules and strategies, specifically in the Eurasian, African and Latin American regions as well as other low-income countries that cannot afford high-speed connections.  Additionally, in NSR’s China Satcom Markets (CSM) report, Chinese state-owned companies are forecast to manufacture and launch over 800 Gbps of GEO-HTS capacity by 2026, with much of this coming over these regions.

And as seen from the deal between Thailand Kasetsart University and the China Great Wall Industry Corp., countries and institutions are willing to play ball with China to further their goals. In fact, it is highly likely that another Chinese constellation will enter the market, and/or Hongyan can be increased further from its current 300 to rival the largest planned constellations such as SpaceX and Boeing.

The full backing and power of the state in terms of program development, funding and the sheer persistence in meeting China’s space policy goals are what companies in the West will contend with in a changing marketplace.