With 5 players racing to launch their LEO/MEO fleets in SpaceX, OneWeb, SES, Amazon and Telesat, and with first 4 committing financially, the satcom world is finally acknowledging the Non-GEO shift. The shift that is happening in the sheer volume of capacity in-orbit, economies of scale in manufacturing and reusable launch, low latency bandwidth, idle bandwidth, number of ground stations, efficiency (CapEx $/Mbps/Mo), and emergence of new segments.

For the initial phase of launch, the LEO companies combined will launch a total of >8,600 satellites in the next 5 years, at which point it is likely that SpaceX with a satellite lifespan of ~5 years will start replenishing. Such a flux of launches YoY represents a shift in the fundamental satcom model; a model where, satellite architectures update faster, have shorter lifespans and less fuel, more COTS, and beam shaping to adapt to flexible demand. Make them cheap, launch ‘em faster. There is already a significant upgrade on SpaceX satellites vs. OneWeb (on beam flexibility), and the same for Amazon/Telesat (with ISL capability) as compared to today’s SpaceX satellites (although SpaceX is already testing iSLs).

As many of these constellations ramp up, Global HTS supply is expected to shoot up further, making the curve even more exponential than from GEO-HTS. More than 66 Tbps of capacity is expected to launch from the Phase 1 constellations of the 4 companies in the next 5 years, as compared to an addition of ~10 Tbps from GEO-HTS in the same period, according to NSR’s latest HTS Satellite Constellations, 3rd Edition report. The key verticals remain the same; i.e. Backhaul, Trunking and Broadband (including Hotspots), though bandwidth per site dictate whether GEO or Non-GEO would be favorable as LEOs look to serve sites with 1-10 Gbps demand due to TCO viability, while GEOs typically fit more within the 10-200 Mbps demand range. 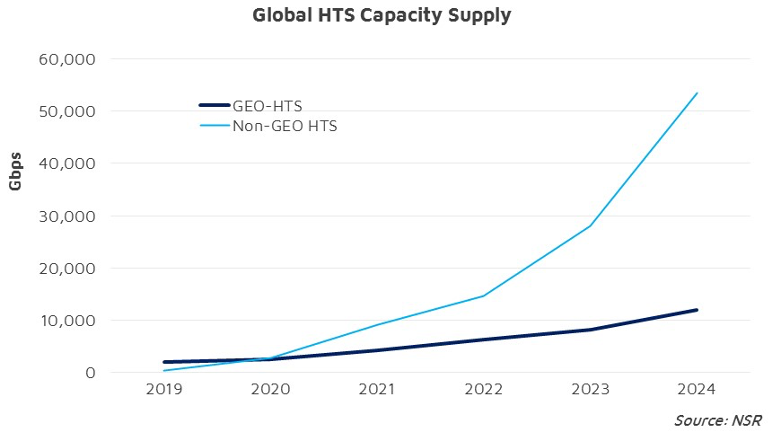 Due to high unused LEO capacity, especially over oceans –pricing is set to become distorted in the long term on account of extremely elastic capacity over the Pacific, Atlantic and Indian Ocean regions. With SpaceX and OneWeb comparable to VHTS economics (CAPEX $5-$10/Mbps/Mo), and with Amazon and Telesat to further improve, the competition for high bandwidth sites is set to skyrocket, pushing for consolidation in the GEO industry.

With cloud adoption racing in the GEO market at the application layer, and the entry of Amazon Kuiper with a $10B investment, the market capture of cloud services ($364B market in 2022) will take prominence in the medium to long term. Players like Amazon may take the lead to match Fiber + CDN pricing with their Kuiper constellation in a bid to own the network pipe and thus further increase cloud market share. While SES has already stitched a partnership with Microsoft, players like SpaceX and Telesat are expected to follow Amazon closely with Cloud player collaborations to monetize the Fiber+CDN business model.

Latency has long been a subject of debate on its efficacy within communication networks, and whether sizable revenue could be earned just based on this attribute. With the FCC inviting applications with a <100ms RTT criteria for its $16B Rural Broadband subsidy, and the high CAGR of gaming/live-streaming of gaming along with e-2-e secured stock trading applications, LEO operators are betting this attribute will unlock revenues in the future.

With landing rights proving a barrier, many companies have stitched partnerships with local Telcos to be able to land their traffic in the country/region. Best example is of OneWeb that has Bharti (Airtel) and Softbank as its shareholders, while having partnerships with NBN (Australia), Eutelsat and Avanti (Europe/Africa), Talia (Africa), Taqnia (Middle East), ViaSat (North America) and Hughes (North and South America). Noteworthy, no company has yet managed a Russian or Chinese agreement, where local constellations are expected to launch.

Non-GEOs represent a $68B opportunity over their lifetime, denoting a massive increase in market addressability on top of the GEO market. Addition of new low latency Rural Broadband segments, secure Military lease and Secure Fiber+CDN segments give a massive boost to the space industry. The market in the next 5 years will keenly contest GEO vs. non-GEO offerings, while carving a niche for each on a per site bandwidth basis. Given the low TRL and high cost for FPAs, GEO is still expected to win in areas of DTH consumer offerings and critical segments like Aero, although with large trunks, Non-GEOs surely will make a dent in the Backhaul segment and Fiber led applications.

Fundamental metrics like manufacturing scale, launch reusability, pricing, idle bandwidth, downstream capacity distribution, role of security and cloud, and revenue management are expected to be overhauled with the innovation that Non-GEOs bring to the industry, further pushing the envelope the satellite economics and demand addressability.

The question arises: Is the industry better with or without such massive investments? While constellations certainly push the envelope on capacity efficiency, they also predicate a continued war on pricing. But lower does not necessarily mean lower revenues. While legacy fleets are expected to be outdated with new GEO-HTS and LEO-HTS capacity coming in, overall the industry will witness an increase in revenues on account of price-demand elasticity within existing segments, and emergence of new segments with secure cloud and low latency features.

Ultimately, operators will ask this question: How good are their customer relationships vis-à-vis their capacity efficiency? Because largely pricing will dictate future deals and investments in NGSOs or VHTS, or regional consolidation will become mandatory to preserve captive positions.