Home > The Bottom Line > Cruising Down the Value-Chain

Cruising Down the Value-Chain

Just how many dollars are down the maritime VSAT Value Chain?  The talk amongst nearly every facet of the maritime VSAT market are satellite operators moving closer and closer to selling directly to the end-user – and there are some very visible moves to that effect from players outside the traditionally called-out Inmarsat. 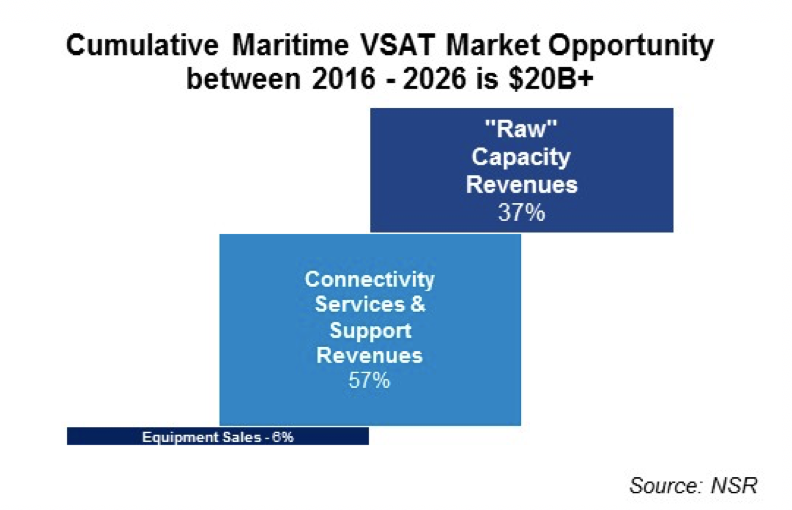 Looking at data from NSR’s Maritime Satcom Markets, 5th Edition we asked ourselves that very question, “Just How Many Dollars Could Satellite Operators Stand to Gain?”  The Answer – Potentially lots.

Breaking down our revenue projections into:

With upwards of $20 Billion dollars in cumulative VSAT revenues between 2016 to 2026 across the merchant, commercial passenger, offshore, fishing, and leisure markets, there are many ways a satellite operator can expand itself beyond ‘selling capacity’.  Are there barriers – Sure.  But, in some markets those hurdles to ‘touching the end-user’ are getting smaller and smaller.

None of these barriers are lowering faster than in the Commercial Passenger connectivity markets.  With highly predictable routes and schedules, these ships are some of the most predicable in the maritime industry – and a cruise ship is almost always going to require ‘more bandwidth’ over time, not less.  This high level of predictability makes it is easy for satellite operators to build business cases that fall in-line with their CAPEX planning cycles on the demand side – with the only variables ‘how close’ and ‘how much’ required to ‘reach out and touch’ a ship.  While that cost-benefit metric varies according to satellite operator, one could easily call the Commercial Passenger Maritime VSAT market the mobility equivalent of the Video/DTH Market. 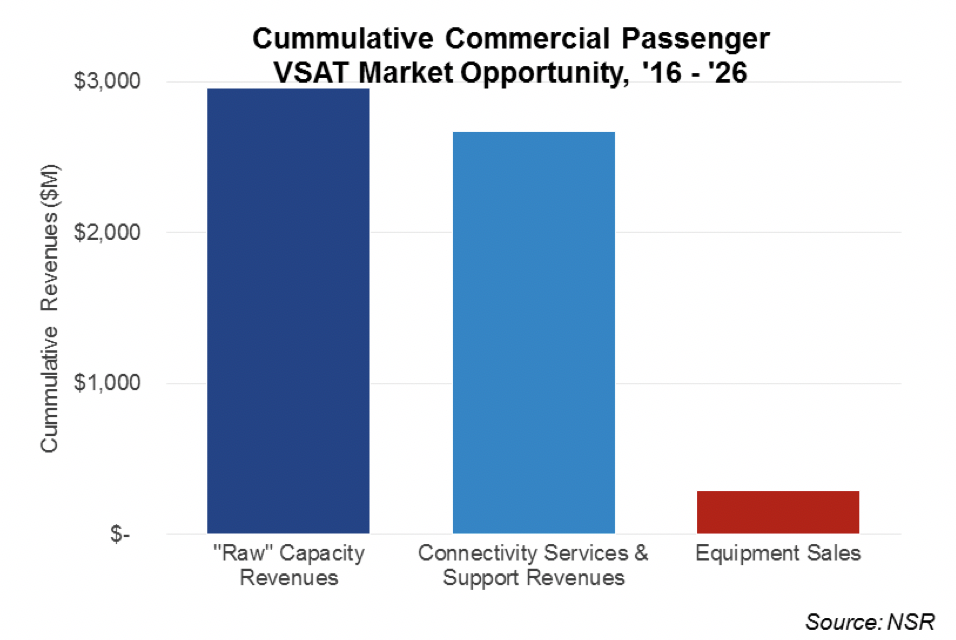 Just what is the benefit?  Upwards of $2.6B in Connectivity Services & Support Revenues – on top of the nearly $3B that commercial passenger VSAT markets are expected to generate cumulatively between 2016 to 2026.  Ocean-going Cruise Ships alone will account for almost all of that $2.6B – again, getting closer and closer to a ‘DTH-like’ concentration of demand across highly predictable routes over time over a (relatively) few number of ships.

Although the “Pro’s” start to line-up in favor of a down-value chain move by satellite operators into the Ocean Cruise Market, challenges remain.  Firstly, providing reliable connectivity across different satellites in the throughputs that a cruise ship requires is a complex task – that’s part of why Service Providers exist.  Secondly, it’s costly to send technicians onto a ship to diagnose a connectivity issue ad hoc, or even to provide services for regularly scheduled maintenance.  Even if cruise ships happen to be in predicable locations, that is a big step outside the traditional expertise of a satellite operator.  Thirdly, there is a complex terrestrial and shipboard network, which must be further integrated and supported in various degrees by the ‘service provider’ – again, requiring experts adjacent but not core to a satellite operators mission to optimize by application or even provide shipboard WIFI optimization.

While it’s easy to see the benefits in a satellite operator ‘cruising down’ the ocean cruise value-chain, it will require a careful cost-benefit analysis on behalf of the satellite operator to fully-vet their ability to meet the requirements of these end-users.  For satellite operators, deciding how much and how close they want to be involved directly with end-users will depend on their willingness to step outside their core expertise and ‘be disruptive’.  For Service Providers, they will need to clearly define and defend their position in the value chain – and look to move deeper into supporting additional applications such as passenger streaming video, hosted IT management and other “Value-Added Services.”