The M2M/IoT via satellite market has traditionally been one of low data rates, providing M2M end users with tremendous value from small data packets for the purposes of location tracking, temperature monitoring and myriad other applications. Traditionally most M2M usage has consumed very miniscule amounts of data, compared to nearly all other kinds of applications, most notably consumer broadband. Without any TCP/IP overhead required for many satellite M2M/IoT systems, most applications have traditionally used less than 100 kB per month of data traffic. However, in NSR’s recently released M2M and IoT via Satellite, 8th Edition report, a diverging trend was identified for data requirements and latency across a range of applications, of which M2M satellite operators are modifying their product offerings to take advantage of such growing demand.

Latency – How Low Can You Go?

Satellite M2M service is available with a range of offerings with varying latency from effectively real time to over 20 minutes. Moving forward, many applications will be well suited to much longer latency times. These include basic agriculture usage, and asset tracking of non-critical payloads. Longer latency is also acceptable in a range of other applications for a sub-section of use cases, such as mining and shipping.  Such applications will be key for upcoming IoT focused small satellite constellations to begin operating and generating revenues, before adding additional satellites to their constellations for improved reliability and service.

While latency is not critical for applications like Agriculture, at the beginning of the life of small satellite constellations, latency may exceed 10 hours initially on test satellites, resulting in a greater lag time between launch and higher levels of revenue generation. Kepler Communications stated that with an initial two satellites in orbit, there will be approximately 12 hours of latency for users of the service, which is much higher than what end-users would expect.

In the early stages of small satellite constellations, it will be a challenging ask for customers to accept such long latency times for all but the most specific applications, such as pipeline monitoring in a remote and unmanned area. This is especially the case when major MSS satellite operators already provide lower latency and highly reliable offerings, and terrestrial M2M operators offering low latency products. Other applications such as public safety, mission critical telemetry, and command and control usage must remain with near real-time usage, to Inmarsat and Iridium’s advantage.

While bandwidth requirements will remain very low for most applications for the foreseeable future, there are some M2M applications that will require significantly higher data requirements moving forward. The Utility market in particular will see such a divergence, where NSR expects 227,000 in-service M2M units in 2026, up from 135,000 in 2016. 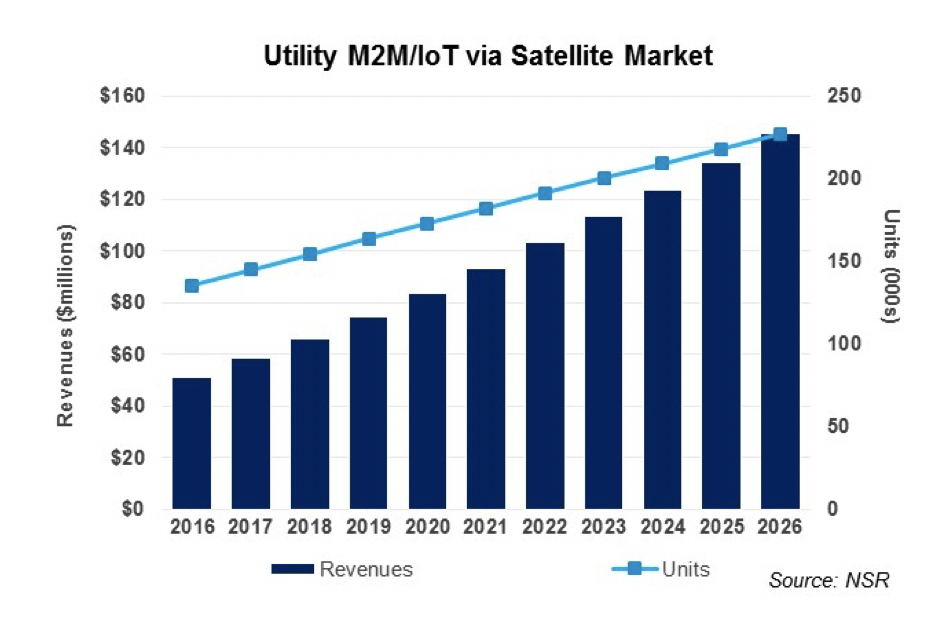 On the one hand, a portion of these terminals will simply relay meter reading data, totalling data requirements in the kilobytes. On the other hand, increasing levels of automation will require near-zero latency and much more frequent M2M data transmission, in addition to greater numbers of points being monitored. This includes automatic control based on electricity demand, efficiency data, data exchange with the primary grid, wind turbine positioning and others. Greater throughput offered on new constellations such as Iridium NEXT will grow the market on the high end and be in the best position moving forward to address growth of bandwidth requirements.

Add in potential for growth of CCTV and security requirements, and data requirements add up quickly. Precision GPS in agriculture for example will increasingly require granular, high frequency data analysis and If aerial or satellite imagery is required, then gigabytes of data could be required.

While currently MSS M2M/IoT terminals contribute 92% of global in-service units, Ku-band VSATs will be increasingly cost efficient for the above use cases moving forward. This is especially the case when backhauling large volumes of sensor data. Flat panel antennas will further grow Ku-band demand for the mobile market. This is especially the case for commercial usage of Connected Cars (ambulances and other civil government demand); however, there are many technical challenges that have yet to be resolved.

Satellite operators will need to continue to target the main M2M/IoT market – low data rate applications, which comprise much of the market, in the face of increased competition from new satellite constellations. Smallsats will be able to target niche applications with low bandwidth requirements; however, competition will be fierce. On the other hand, operators and service providers will need to set a plan in motion to support higher bandwidth requirements and lower latencies for new applications, more analytics and big data usage, which importantly comprises of use cases which are the most valuable and have the highest revenue margins. Without accommodating for such demands, the value proposition of terrestrial M2M/IoT networks will continue to grow to the detriment of satellite.

The major winners will be the existing major MSS operators, which have the established market power with long term customer contracts allowing for revenues to be spent on satellite and ground system upgrades to lower latency and greater bandwidth systems. Small satellite constellations, on the other hand, will be at a strong disadvantage, especially in the early phase of constellation launch with only a subset of applications useful for long latency and low bandwidth.