Home > The Bottom Line > Does the Circle Close for Starlink?

Does the Circle Close for Starlink?

As recognized on multiple occasions by Elon Musk, the Ground Segment, lowering end user terminal costs is probably “the most difficult technical challenge” Starlink is facing. In fact, this is the key to unlocking the Consumer Broadband market, not just for Starlink but for all the LEO constellations. The Rural Digital Opportunity Fund (RDOF) won by SpaceX ($885.5 million in Phase 1 auction) is certainly a big boost for the project, but is it enough to cover the additional costs for LEO equipment? 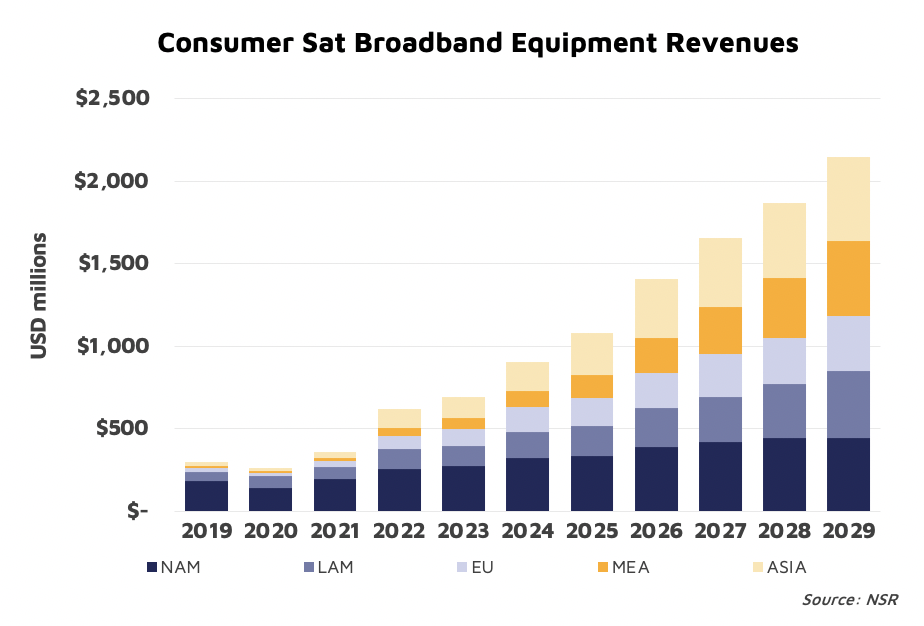 Connecting the unconnected is a massive opportunity for the Satellite industry. Be it through Direct-to-premises links, over Wi-Fi hotspots or partnering with MNOs offering Satellite Backhaul, Satcom is just scratching the surface of the total addressable market. Naturally, as terminals are a key element in the equation, equipment vendors will capture their share of this opportunity. In fact, NSR’s Global Satellite Ground Segment, 5th Edition report estimates equipment revenues in the Consumer Broadband segment will grow at double-digit rates to surpass the $2 billion annually by 2029.

In the GEO space, a Consumer Broadband terminal is typically in the $300-400 USD range (modem, antenna, RF inclusive). While these prices might be a barrier in emerging markets, it is actually a relatively small contributor to the Total Cost of Ownership (TCO) in a market like the U.S. where raw bandwidth comprises bulk of the TCO.

A 250 Kbps bandwidth allocation (this represents the average consumption of a user during the peak hour), at 200 USD/Mbps/month of raw capacity for 36 months yields a cost of $1,800. With Average Revenue per User (ARPU) in the neighborhood of $100 USD/Month, the margin for GEO operators is in the 35-40% range.

The case for Starlink (and LEOs in general) is highly influenced by the higher costs of the terminal. With constantly moving satellites, antennas need to track the signals. Consequently, instead of using a fairly cheap parabolic antenna (< $50), these constellations need to use sophisticated systems that can cost upwards of $2,000 (low-range consensus estimate cost for Starlink terminal).

At today’s Starlink ARPU ($100) and considering the one-off sign-up fee ($500) and the RDOF subsidy ($1,400 per sub), the total revenue potential over a 3-year period for Starlink is $5,500 USD. RDOF speed requirements (> 100/20 Mbps) will impose much higher bandwidth allocations for SpaceX, certainly not below the 1 Mbps threshold. Even assuming very aggressive raw capacity prices at 50 USD/Mbps/month, Starlink would operate at a low 20% margin. Probably SpaceX hopes to develop a very loyal customer base with churn levels below what is typically experienced by other operators, but what is unquestionable is the much higher weight of the Terminal Cost in the TCO.

What About Other Non-GEO Cases?

Other Non-GEO operators seem to prioritize high-end use cases, with comparatively higher bandwidth consumption and where the cost of the terminal, even if significantly higher than the GEO alternatives, plays a relatively small portion of the TCO.

This is the case, for example, of Cellular Backhaul. While the Satellite terminal cost for a LEO/MEO system, assuming all the advances happening in the FPA space, could be in the range of $20.000 (at least double the price of an equivalent GEO terminal), this would still be an assumable portion of the TCO. Especially as these sites are bandwidth hungry, many times consuming above 10 Mbps.

In Elon’s words, lowering the cost of the user terminal in Consumer Broadband is “the most difficult technical challenge” for Non-GEO constellations. But if the industry can break this barrier, a massive addressable market will be at hand with extraordinary growth ahead.

In the traditional GEO Consumer Broadband model, the cost of the terminal takes up a relatively small portion of the TCO. Conversely, even with theoretically lower capacity prices and government subsidies, the still expensive LEO terminals challenge the economic feasibility of serving households from NGSO constellations. Other use cases like Backhaul or Enterprise, where the cost of the terminal weighs less in the TCO, might be ready to adopt these new architectures.

So does the circle close for SpaceX/Starlink? We don’t really know the absolute costs of Starlink terminals, but estimates show that, even considering the RDOF subsidy, the business case is very challenging, and SpaceX would need to rely on really high-end, bandwidth-hungry subscribers with significantly lower churn rates than the rest of the industry to amortize the cost of the terminal.