Home > The Bottom Line > Don’t Give Up on Streaming

Don’t Give Up on Streaming

New trends in video consumption are challenging traditional satellite video platforms. Emergence of OTT and video streaming is starting to have an impact on subscriber counts and, consequently, on the value satellite operators can generate and capture from their assets. However, satellite continues to be the best solution for reaching large audiences, especially when terrestrial networks become congested. Will satellite support the booming demand for video from IP devices and continue playing a central role in the media ecosystem? 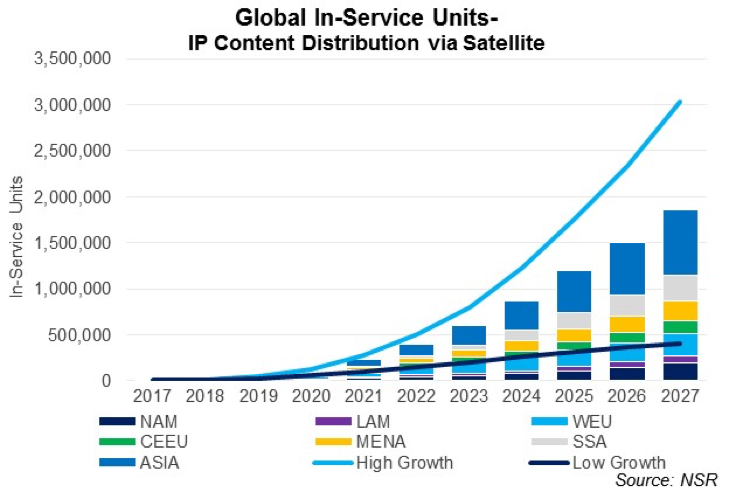 Despite HTS and data markets attracting attention as a satcom growth revitalizer, video continues to generate over 60% of total satellite capacity revenues. Defending and finding new opportunities in the video segment is thus essential for the health of the satcom industry. IP Video could be a serious threat for the satellite industry but, if satcom plays its cards well, it could be an interesting growth opportunity. According to NSR’s Wireless Backhaul via Satellite, 12th Edition report, IP Content Distribution could see over 1.8 million sites serving various use cases deployed by 2027.

Satellite has been the dominant actor in video delivery (either through DTH or Video Distribution to cable head ends) for decades. However, viewing patterns are changing dramatically, and IP devices (Smartphones, Tables, Smart TVs, etc.) are capturing a greater portion of eyeballs. Media platforms are taking note of this transition and are adapting their delivery systems by prioritizing IP means.

Having said that, the risk for satcom is not so much in the screen or the format that creates the traffic but on the viewing habit. The good news is that these habits continue to favor linear usage patterns. According to the Ofcom 2017 Communications Market Report, live TV remains the central component of TV viewing. Satellite multicast advantages are still unmatched by any other means of content distribution and, with terrestrial networks saturating during peak hours (especially when many want to access the same content) or simply being unavailable (remote areas), it needs to find its way into the IP Content Distribution ecosystem.

The cost of streaming via unicast sessions grows linearly with the number of viewers. Conversely, given the multicast advantages of satellite, the bandwidth costs remain constant regardless of the number of viewers under the same footprint. Even assuming aggressive pricing for terrestrial content delivery and conservative pricing for satellite bandwidth, the crossover point at which satellite is more cost effective than terrestrial can be as low as 150 average monthly viewers. 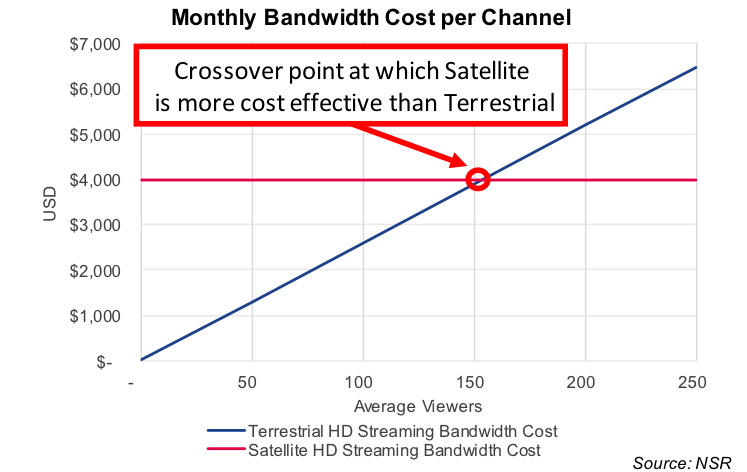 The case is particularly relevant in emerging markets where some customers are leapfrogging traditional TV and consuming video with IP devices. Ericsson ConsumerLab’s TV and Media report for Nigeria shows that, even with poor mobile broadband coverage and expensive data packages, Nigerians are consuming more content on mobile platforms (Smartphones and Tablets) than TV. IP streaming today is limited by the quality of the terrestrial coverage; however, leveraging the ubiquity of satellite, media platforms could capture greater opportunities in these hard-to-reach locations by adopting IP Content Distribution over Satellite.

IP Content Distribution over satellite has the potential to open a wide range of new use cases for the industry. Territoria, a service launched by TricolorTV in partnership with Eutelsat, NEOTION and Broadpeak, has been an early success in this emerging vertical. Consumers nearby one of the Wi-Fi hotspots can access a set of 50 Tricolor TV channels without consuming their mobile data allowance, while owners of cafés and other commercial outlets attract more customers.

The possibilities are wide and varied. From serving high-density locations (airports, sports venues, etc.) where bandwidth would otherwise exhaust, to expanding video streaming into areas where terrestrial coverage is poor, or creating a hybrid satellite-terrestrial service where the most popular channels are broadcasted via satellite, the industry still can find growth opportunities in the new video distribution paradigm.

Similar to the rest of the industry, video over satellite is in a state of transition. Widespread adoption of IP devices (Smartphones, Tablets, Smart TVs, etc.) is challenging traditional video platforms; however, satellite can also be a valuable tool in the IP Video Distribution ecosystem.

The multicast advantage of satellite is still unmatched by any other platform. Consequently, satcom must find its opportunities serving the most popular channels, linking hard-to-reach locations and/or concentrating in high-quality video delivery.

If one does the math, a satellite IP Content Distribution network makes a lot of economical sense in many cases. However, many of these networks are already highly embedded into terrestrial networks and awareness, idiosyncrasy and perceptions are huge barriers to overcome. Despite this, it only takes a progressive operator that understands the benefits of satellite and is willing to take the bet for the market to take off.