Some of the world’s largest untapped ore, oil, and gas deposits lie underneath the Arctic, with this for years having been touted as a potential opportunity for international and national oil companies, and mining companies alike. Despite myriad challenges to access these resources, this nonetheless represents a potentially large long-term demand source for communications infrastructure. With the sparse and challenging nature of Arctic geography, will satellite be a perfect fit for the region?

NSR’s newly released Polar Satellite Markets, 2nd Edition report projects energy markets (inclusive of Oil & Gas, Utilities and Mining) will reach $21 million of annual capacity leasing revenues in 2025. While much of this growth is on the HTS side, FSS C-/Ku- will remain for a few reasons, most notably FSS will keep its high share for terminals onshore in the Arctic, where demand is strongest for Ku-band for legacy reasons. 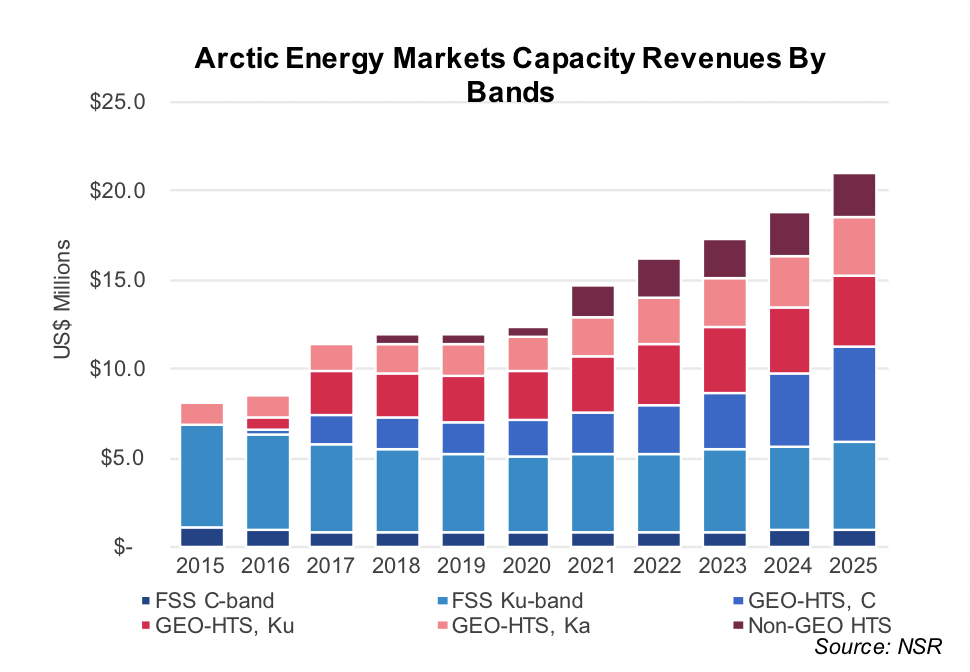 While there is growth to be found, it is important to note that much of this growth is derived from new capacity at existing sites, rather than new mining and energy sites being set up. The U.S. Government has announced its intention that the Arctic (and the Atlantic) will be further opened up to drilling. However, the massive investment required and the low oil price make it unlikely that many companies will take advantage of these favorable regulations, given challenging economic realities of operating in the region.

Norway likewise is also opening up additional areas for Arctic exploration in the Barents Sea north of the country; however, the same macroeconomic concerns apply, at least in the short-term, with the simple fact that it is cheaper to extract elsewhere, with Arctic drilling difficult to breakeven when the crude price alone is at ~$85.

However where satellite growth is forecasted most is from new HTS terminals, with 72% of capacity revenues generated from HTS in 2025, compared to 25% in 2015. These higher revenues and bandwidth are driven by remote control and automation, as companies intend to reduce labor requirements on remote sites. Such systems will inevitably require GEO-HTS and Non-GEO-HTS systems, where terrestrial infrastructure is not installed, or is used as backup capacity.

For Oil & Gas in particular, there will be double the number of in-service GEO-HTS terminals within the space of one year in 2017, due to the latent demand from existing offshore Arctic vessels. Such vessels will require significantly more advanced applications on the vessel in order to operate in region safely. Nonetheless after HTS demand jumps, demand growth will remain relatively limited with the lack of significant growth in new Oil & Gas sites in the medium term with current lower crude pricing. There is simply no getting around rigs being idle, and reductions in existing capacity on some sites without long term satcom contracts. MSS demand will remain relatively stable, driven by basic M2M, SCADA and monitoring systems already being implemented by energy users, especially Utilities operators in Canada, Alaska and northern Europe.

With LEO-HTS constellations around the corner covering Arctic regions, the energy markets will have lower levels of implementation on such constellations compared to other applications – many initial implementations will be more focused on providing basic fiber type connectivity in the short term, before transitioning to lower cost terrestrial links, which for long term projects will be significantly more cost effective. Such long-term site stability justifies the high CAPEX of establishing terrestrial links, whether by fiber or microwave link. This is especially the case as oil and gas end-users stick to existing fields that have well known quantities of petroleum and are within easy reach of existing assets.

More fundamentally though, the majority of ore in the Arctic will remain untapped, due to the cost required for extraction, and this will flow on to satellite operators as demand growth remains more muted. There is some upside though, as prices for rare earth metals and other ores increase in price over the long term, additional satcom demand may be generated, such as the potential rare earths mine in Kvanefjeld

With HTS supply in the Arctic increasing, mining and Oil & Gas sites and vessels will take advantage of such new capacity opportunities as they become available, driven by latent demand through improving operational efficiencies. However, underlying demand longer term will remain much more modest with limited strong growth opportunities available from new sites as challenging economic realities are confronted.  HTS demand will become increasingly core to the energy markets; however, the scale of Arctic demand remains small.

The relative dregs of satcom demand (compared to non-Arctic regions) will limit any significant levels of investment for dedicated polar demand, without any key clients locked in in advance to mitigate investment risk, be it energy clients, government, or otherwise. As a result, NSR views demand from Arctic mines, Oil & Gas and Utilities as a non-core market for satellite operators given the very high level of risks and lack of certainty regarding ROI considerations.