Home > The Bottom Line > East vs. West: Building the First Lunar Base

East vs. West: Building the First Lunar Base

May 6, 2021 by Syed Hussain Haider Bokhari | More from this Analyst | Profile

Last week, China & Russia signed a memorandum of understanding to create a joint lunar science station. Earlier this week, the SLS core stage arrived at NASA’s Kennedy Space Center, in anticipation of an Artemis 1 launch in late 2021, or early 2022. With major powers taking new, strongly funded, and different approaches to the Moon, has a new space race begun?

In the last decade, the technological capabilities of, and trust in, the private sector to cater to demand, has prompted governments to look beyond low-Earth orbit. With over 20 years of operations, the ISS is coming soon to an end as it is slated to operate until 2028. NSR’s Moon Markets Analysis looks at the dynamics of ‘The West’s ’(ESA, NASA, and other Partners) new focus on the Moon as the next phase of space science and exploration; bringing commercial opportunities to the space industry.

A Market in the Making

While most space markets generally grow from government-only, to business-to-government (B2G), eventually reaching business-to-business/consumer levels flows (such as satellite communications and Earth Observation), the Moon market is considered to help develop both the government programs and B2G markets at the same time, as exemplified by NASA’s CLPS program and NextSTEP program that both enable opportunities for commercial players.

However, given the different programs, as well as the unproven sustainability of a lunar market, alongside the technological challenges of reaching and generating revenues via lunar activity, the following questions need to be asked: 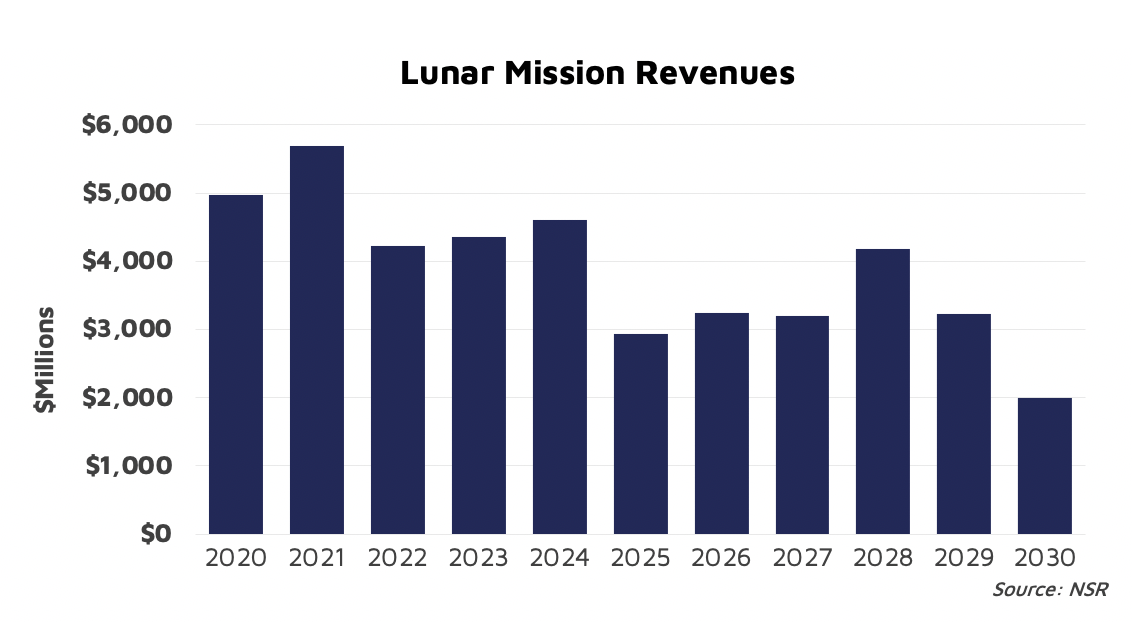 NSR’s Moon Markets Analysis (MMA) report forecasts revenues from lunar mission contracting & service to generate over $42.6B, cumulatively, with an average of $3.8B in annual revenues between 2020 and 2030. NSR also forecasts that average revenues for infrastructure missions will account for $784M, on average annually, with over 10 missions over the next 10 years, resulting in this vertical accounting for 21% of total cumulative revenues. Planning and development of infrastructure is divided to mitigate risk in two phases: the leading robotic phase, to develop the science & technology required for higher-risk, longer-term missions, and the eventual follow-on crewed phase.

In the East, innovative developments in technologies have led China to launch the Chang’e 3 lander, the first since the Apollo and Luna days on the Moon, and plans to return with Chang’e 6. Russia for its part is going back to the Moon with the revised Luna Program. Both nations are opening doors for commercial players to be involved in their programs.

In the West, NASA unveiled the sustainable “going back the moon” campaign with ARTEMIS at the center and shown off the Lunar Gateway. NASA has emboldened commercial players to support with early transport but also for long-term sustainable landing.

Even though the East is lacking in experience, the feasible approach has been to include  other players through international cooperation on technological capabilities. However, the West has acquired tremendous experience, possesses key technological capabilities, and the commercial landscape is wide-open, which can enable USA and its allies to solve getting to the moon and staying there.

NSR expects that the commercial opportunity for both sides of the world will be a work in progress as governments are still fleshing out the key restraint associated with the Moon Markets, i.e., cost-intensive missions. But, with drivers such as geopolitics and increases in public-private partnerships, governments are enlarging their space spending budgets to get ahead of each other and win the race by improving science to innovate, develop new technologies and gain an advantage to successfully implement its strategic plans and priorities.

The business plans for the Lunar market are being drafted by taking a page out of the International Space Station book. To have sustainable continued human presence on the Moon, governments are the enablers, and drivers for the market initially. And this time commercial players are along for the ride as budgets are approved to enable more missions, and public-private partnerships are created through programs such as CLPS, NextSTEP and ILRS.

Therefore, the “space race” has begun with influx of investment by governments to get to the moon, establish bases, create commercial opportunity, and form an open and safe market combined that all objectives are aligned with their national priorities.  For the East it’s to establish the first hold, and for the West it’s to revive the past while thinking about a sustainable future.