NSR’s Emerging Space Market Opportunity (ESMO) report explored global investment in players driving the development of new applications and approaches to the space industry. Most companies studied started small, delivering innovative products or ideas addressing an existing need or developing a new market niche. Except for a successful minority, most remain at the research and development stages, fighting for grants and early stage investors.

Recent NSR research shows that the emerging space market has continued to win funding and received an overall estimated investment of $5 billion in the past 18 months alone, with over 70 new companies entering the market. Is this a sufficient amount of funding for what is still a capital-intensive business?

How much can this recent influx of money buy, and what does it mean for the future competitive landscape and market dynamics of the space industry for each market segment studied in NSR’s ESMO report.

This segment is the driving force in emerging space and has received more than half of all investments. Launch is the core of this growth: launchers are being developed as a response to the growth in demand for their services, a surge derived from the emerging demand from small/mini/nano satellites and constellations as well as for lower cost launch across the mass spectrum. Existing launchers have predominately specialized in satellites greater than 500 kg, and the cadence and prices simply cannot keep up with small payload demands.

Launch Service Providers are speeding up to build new rockets designed to serve diverse orbits to meet this demand, and launcher companies have received an estimated $2.3 billion in the past 18 months. Blue Origin, SpaceX, Virgin Orbit and Exspace (Casic) head the list, followed by RocketLab, Relativity Space and others.  This is good news for small satellites waiting in the launch queue. Yet, not all development has progressed smoothly; Firefly Space Systems filed for bankruptcy in 2017, resuscitated by an investor as Firefly Aerospace. Fully owned by Noosphere Ventures, Firefly can now move forward with R&D on its Alpha rocket (1,000 kg payload of smallsats) for launch by the second quarter of 2019.

Launchers aside, companies in E2S received a smaller fortune in sectors whose activities interweave with launch. An estimated $461 million was invested in equal parts to Launch Brokers and Ground Segment players (33%) followed by Sub-Orbital Launch & High-Altitude Platforms (9%): 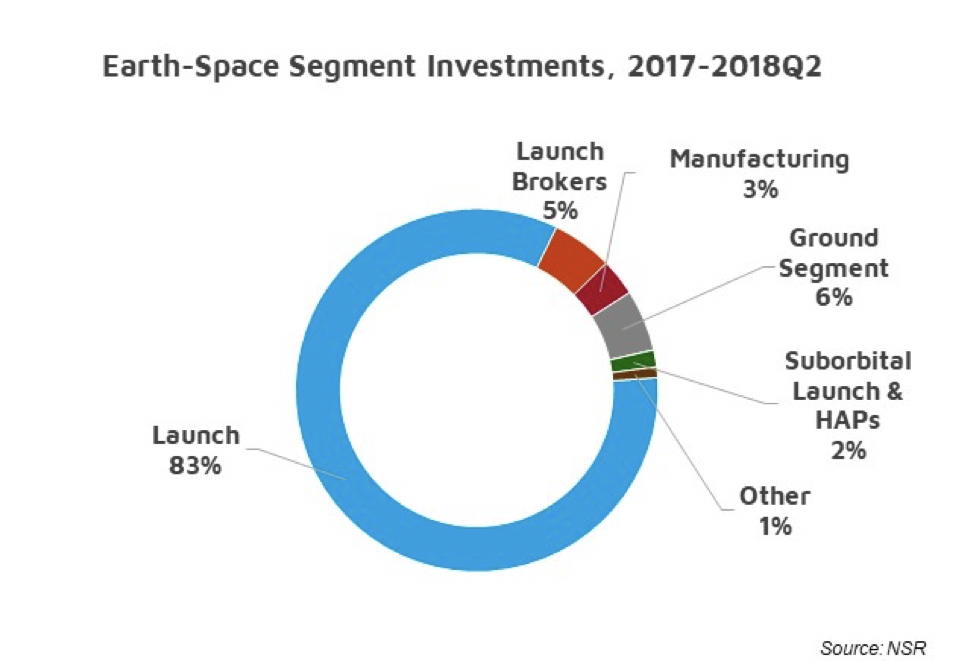 Smallsat constellations, the standardization of production lines and design of new smaller satellites are key drivers of this segment. This activity fuels the establishment of companies across the value chain that support smallsat activities. More manufacturers – both suppliers and integrators – are emerging to build smallsats, as are complementary service providers including launch and propulsion. Indeed, the smallsat launch backlog has created not only interest in developing new dedicated vehicles, but also in developing propulsion systems tailored to smallsats that offer greater flexibility in operators. With the right propulsion system, a satellite can be launched on a generic rideshare mission and move itself to the optimal operating orbit rather than wait for the perfect rideshare match or pay for a more expensive dedicated launch. 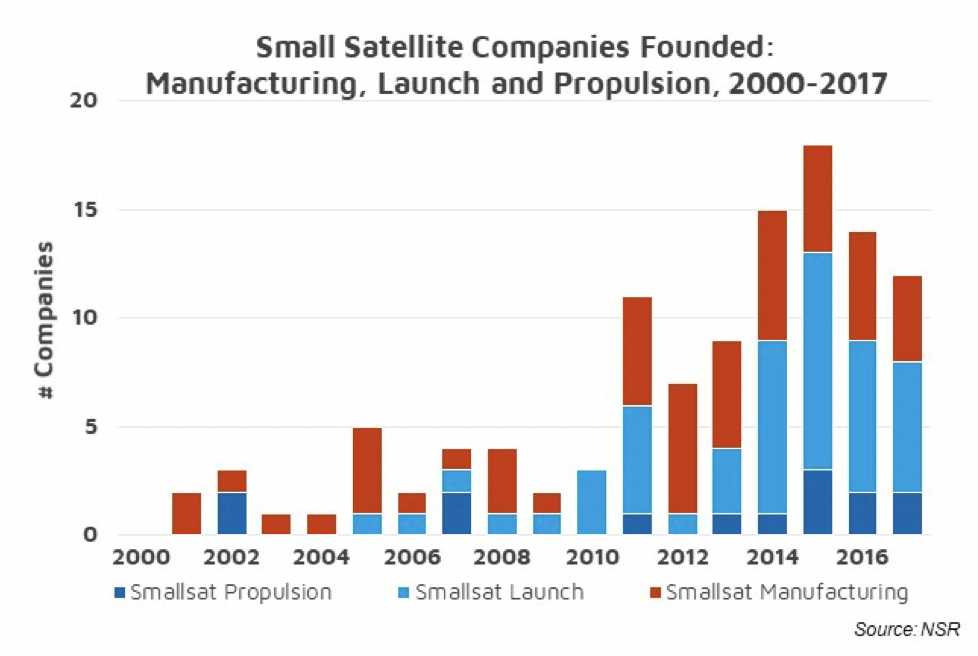 NSR expects small satellite launch vehicles to drive this segment forward in the next few years, as constellations have created a market for a new family of low orbit launchers. Technological spillovers and acquisitions of new tech by traditional space firms will accelerate this momentum. New propulsion designs both for launchers and satellites will also be a key driver. Those that diminish payload costs and offer an attractive launch price will be the winners in this E2S race.

Space exploration and missions to the Moon and Mars are picking up interest in the S2S segment. Indeed, the highest investment in the last 18 months was from the Saudi Government, which is aiming to diversify to a tourism and knowledge-based economy and has prioritized space as a component of this process.

Human habitats in space, the Moon and Mars are sparking a new generation of firms aiming to find the best way to live in space.  Access to water, oxygen and food will be of essence if humankind is to survive on other planets, and dedicated startups are already researching this issue.

Space tourism, via sub-orbital flights is also picking up momentum, with the creation of new spaceports and the design of launch systems and vehicles aiming to provide an experience quite literally out of this world. Launching and propulsion systems remain key to lower the price of suborbital travel. More elaborate ideas such as space hotels continue to develop and attract investment.

As seen in the following graph, the spike of space exploration companies has decreased since 2011, and an emerging interest for orbital services, and in-space platforms has sparked entrepreneurial curiosity. 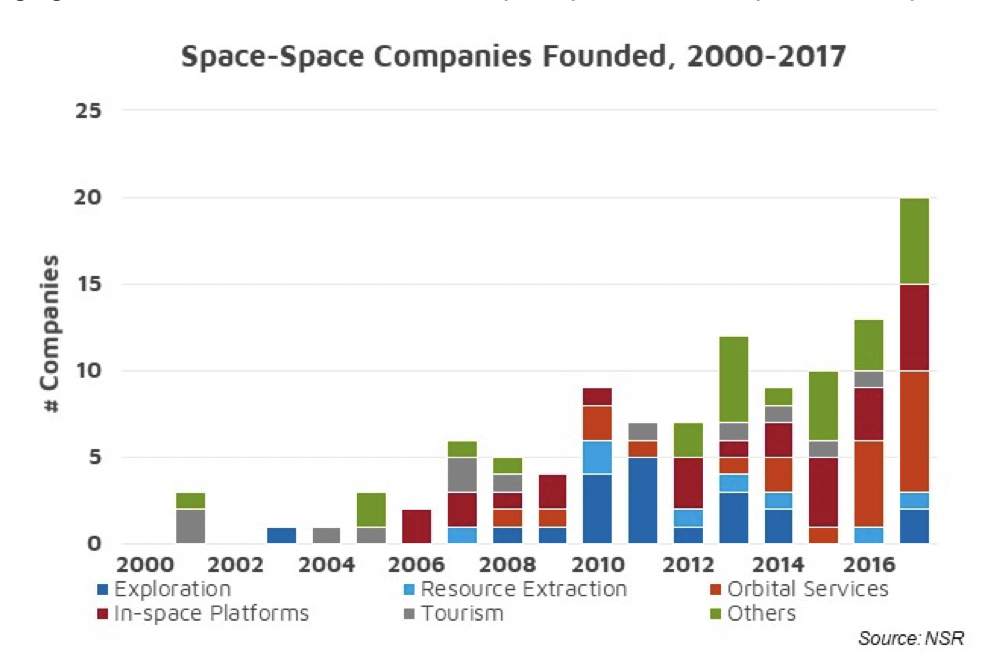 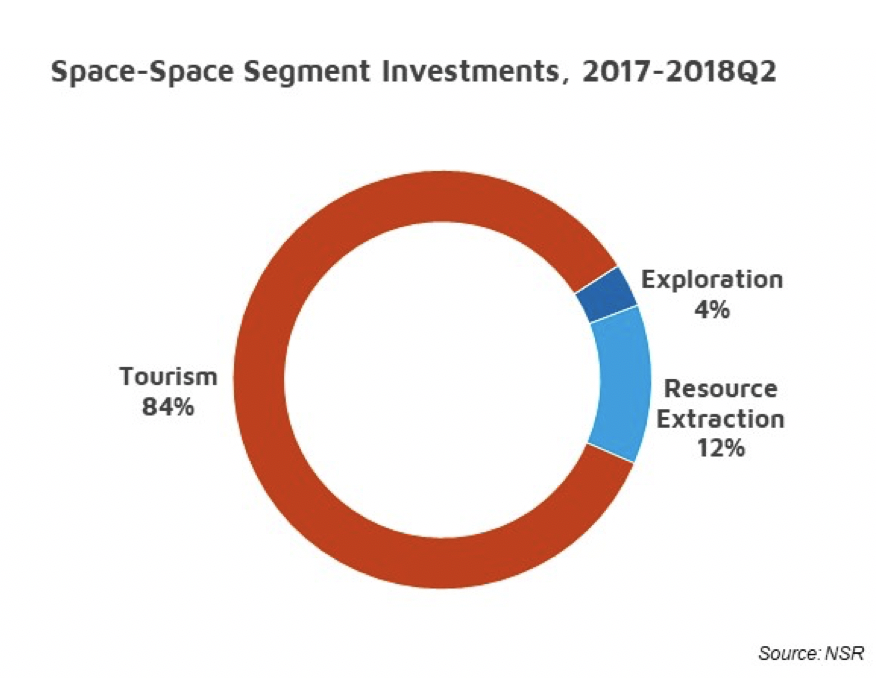 At the end of 2017, Softbank invested an additional $0.5 billion in OneWeb, making it the largest investment in this category, and placing the aspiring constellation operator in a better position than its potential competitors.

Most emerging companies in this category are dedicated to either Earth Observation or Communications. Their common denominator in recent times is data analytics. Digital applications and computer intelligence are key drivers of this segment. Low prices of imagery and bandwidth are also contributing factors. As a result, applications such as off-planet monetary transactions, data encryption and storage, IOT, machine communications, remote sensing or imagery intelligence applications have picked up steam in the past 18 months.

Capacity and imaging prices are expected to continue their decline, and with digital technology as the continuing enabler of data and imaging, we can expect more capital pouring into analytics startups in the months to come.

In the past 18 months, emerging communications companies raised almost half of investments (47%), followed by Earth Observation (36%) and Situational Awareness (11%) businesses.

As suggested in NSR’s Small Satellite Markets, 4th Edition report, competition for funding is the first barrier to entering the smallsat market. Presenting a good business case that yields high ROI and low risk to potential investors has proven challenging, especially for constellations. In the past 18 months OneWeb recorded the highest investment at $500 million, followed by Urthecast in Earth Observation ($142 million in debt financing) and Spire for its hybrid situational awareness-Earth Observation constellation ($70 million in equity). 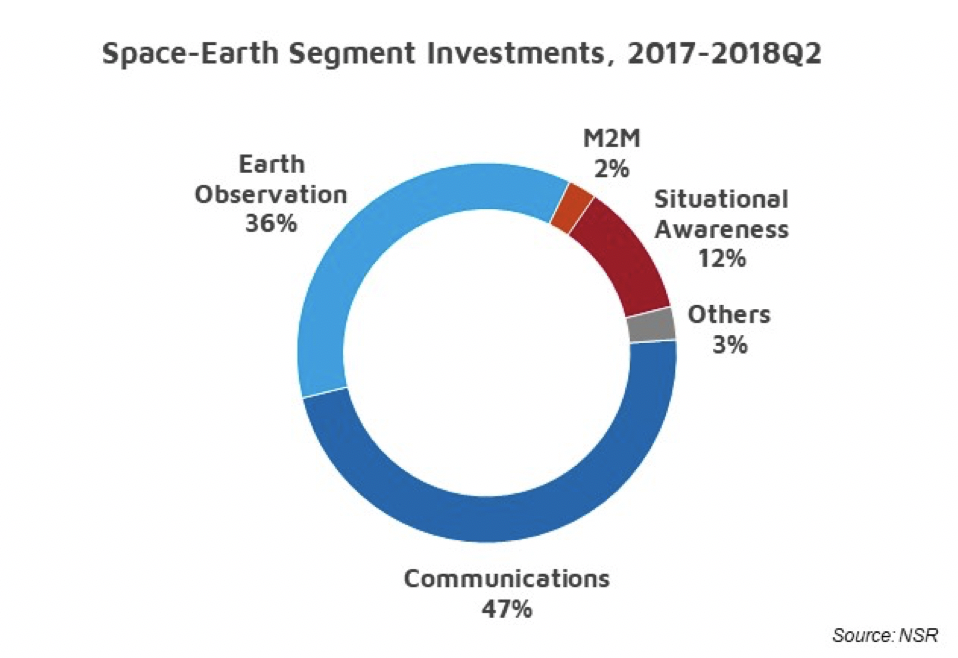 Investment in the space industry as a whole registered growth in the past 18 months, continuing to draw VC players and attracting the attention of more conservative investment groups including national governments and private equity. The involvement of more private capital demanding profitable yields can revolutionize the way we use and apply technologies because it drives efficiency and ROI.  Governments will always play a role choosing and funding space projects, but they need the skills of the private sector now more than ever to set the tune and play the music.

In the end, given the cost to develop projects from launchers to building satellite constellations planned by new and emerging space players, $5B over 18 months is not a lot.  This, however, is not to say that emerging space companies are not on the rise. The private sector continues to challenge ‘traditional space’ models by working on reusable rockets, evaluating launching from offshore, and building more small satellites to replace large ones. And this thinking is now permeating across the industry and attracting new sources of financing that are asking what is perhaps the real $5B question: is space the next big thing?