The Military segment has, historically, primarily been served by GEO satellites for execution of critical applications, including intelligence gathering, navigation and communication. GEO systems, by nature, offer the advantage of significant coverage via a single satellite, especially with the advent of GEO-HTS satellites. On the other hand, latency and significant CAPEX have always been limitations of the GEO architecture. These drawbacks have given rise to the emerging trend of LEO and MEO constellations (NGEO) that can offer low latency and lower cost per satellite. However, constellations have their own set of constraints, with system complexity, ground infrastructure costs and frequency spectrum coordination, to name a few. Considering both, the shortcomings as well as the strengths of each system, could this perhaps be the start of an integration between GEO and LEO/MEO operators with a hybrid GEO-NGEO system on the rise?

Military users – at the most fundamental level – strive for low cost, secure and robust solutions and NGEO constellations, conceptually, checks all the boxes. Following this rationale, DARPA’s recently announced Blackjack program, that is designed with the goal to develop a low Earth orbit constellation with low cost, mass producible space payloads and satellite buses, makes absolute sense. NGEO systems, by design, come with a distinct advantage of being more resilient towards enemy attacks and are easier to rehabilitate if penetrated. Security against espionage and cyber-attacks is another major pre-requisite for military systems, and this is where the new constellation models such as those proposed by LeoSat and Telesat play a significant role. The highly secure mesh network concept offered by these enterprises are ideal for military applications and make for an optimal solution for ideas like the recently announced military “space force”. Keeping the overall system costs low, however, is where it gets complex for NGEO framework. Although the manufacturing and launch costs per satellite are relatively lower, the need for a considerable number of satellites, the associated replenishment costs and the ground infrastructure expenses – all intensify the overall system cost.

NSR’s recently published Satellite Constellations: A Critical Assessment report conducted an extensive analysis of the various NGEO constellations. Their expected capital and operating expenses as well as the possible revenue streams for each were considered to establish expected ROIs over a 10-year period. While NSR believes that some of the constellations studied have an imposing business model that closes the current market gaps seamlessly, as it currently stands, it also concludes that it will be challenging for most to close their business case. As such, NSR estimates just over 1% of total revenues for gov/military will come from Non-GEO constellations by 2027. 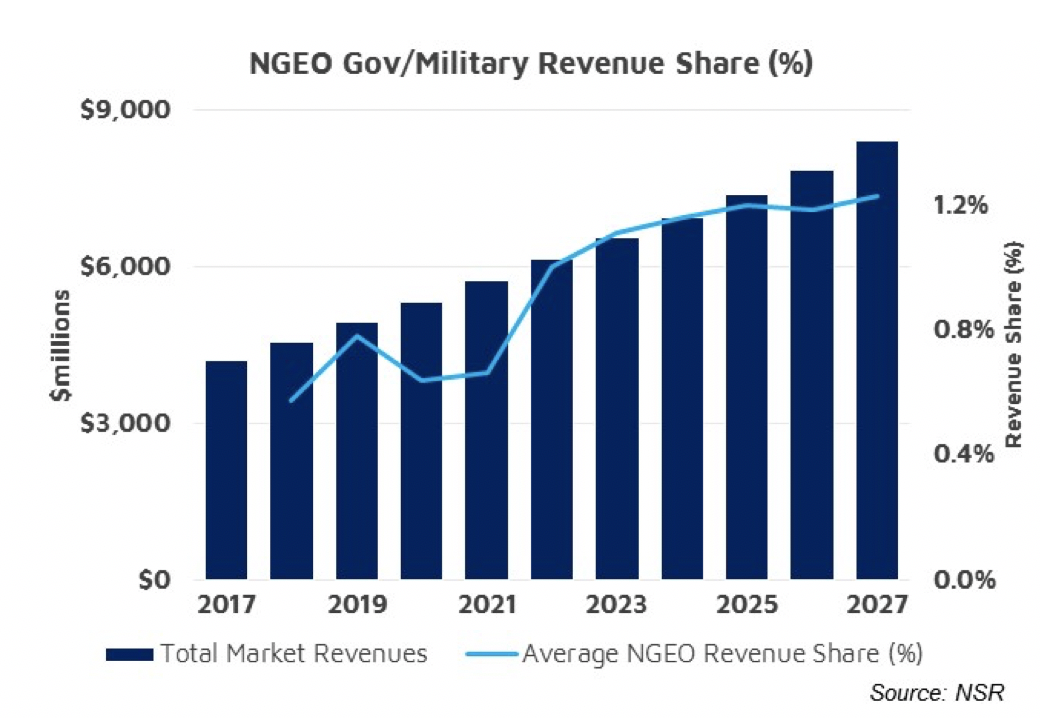 The total cost of ownership (TCO) is a key driver for NGEO constellations, military and otherwise, and is as well one of the biggest challenges for the operators presently. Simply put, either the expenses, mostly CAPEX, need to drop or the revenues need to grow for the business case to sustain. This is where a GEO-NGEO Hybrid architecture could prove pragmatic.

This integration of GEO and NGEO systems can materialize at two levels: Mergers & Acquisitions (M&A) and strategic partnerships between GEO and NGEO operators, both of which are great ways to optimize revenues from GEO and NGEO systems by diligent bandwidth management. Intelsat’s and OneWeb’s unsuccessful attempt towards a strategic alliance was one example of this hybrid system. GEO operators JSAT and Hispasat have similarly announced strategic investment in LEO constellations including LeoSat. In addition to offering higher revenues with comparably less system complexity, GEO-NGEO systems, by complementing each other, can further offer customized solutions for customers.  SES is already well on their way in this regard with the O3b constellation and the oncoming next-gen mPOWER satellites.

Another level of integration, perhaps more technically innovative, and therefore challenging, is a system where GEO satellites can handle the TT&C operations for LEO constellations and act as the base station control system of the network. This, naturally, is pertinent to the low latency-dependant applications. Arguably, latency is a little over-stated when it comes to NGEO constellations. Suffice it to say that a considerable number of services offered by NGEO constellations do not require low latency as a priority. For such cases, successful implementation of this type of integration can result in reduced number of ground stations, thereby reducing the overall system complexity and associated costs.

However slow-paced or technologically immature these concepts, there seems to be an undeniable move towards a GEO-NGEO hybrid system – leading to an integration of the players in the two orbits.

With an increasing demand for more service and an unceasing need for the latest technology, both while keeping the costs low, hybrid Commercial-Military architectures have already become an unavoidable solution for the Military. Manufacturers can offer – what would otherwise need to be customized products – (nearly) Commercial Off the Shelf (COTS) solution for Military sector, thereby keeping the costs low while meeting the requirements. This sharing of products and services between Commercial and Military segments has resulted in an integration at the industry level.

Looking further into the Military sector and their need for low cost, low latency and a robust solution, a hybrid GEO-NGEO system is the natural step forward for Military sector. GEO satellites offer simplicity and lower ground investment, while NGEO yields a low latency and a highly resilient solution against Anti-satellite Weapons (ASAT). From Blackjack to Space Force, the latest developments in government and military space sector are a potential step towards an integration at the orbital level.