T-Mobile and SpaceX announced a technology partnership to develop Direct Satellite-to-Smartphone connectivity and offer ubiquitous coverage and network resiliency. This will be an innovative additional feature for the network, but how real is this market opportunity? What are the technology enablers/challenges? Will this cannibalize telco/satellite revenues? Who is ahead in this race?

While this is a big pivot for Starlink’s current technologies and business models, this move is not a big surprise to NSR as the Direct Satellite-to-Device had already been identified as the “largest opportunity in Satcom’s history”. In fact, according to NSR’s 5G via Satellite, 2nd Edition report, the Direct Satellite-to-Device market offers the potential to generate $66.8B in 10-Year cumulative revenues compared with the $38.5B to be generated from wholesale Non-GEO services, the current serviceable market for Starlink’s Ku/Ka-bands current offers (Global Satellite Capacity Supply and Demand, 19th Edition). 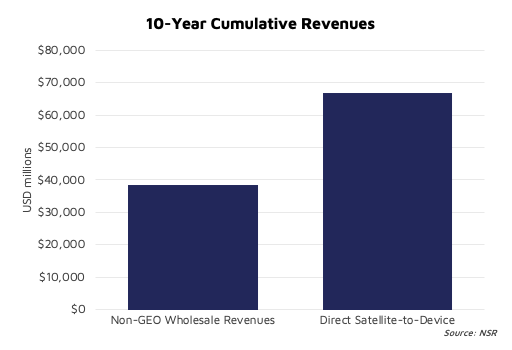 From a satellite perspective, the direct satellite-to-device opportunity is transformational. Traditionally, satellites required proprietary and expensive equipment, and the convenience level was far from terrestrial alternatives. With the ability to communicate with mainstream devices, the cost of the terminal and the service will not be a factor anymore as users already own it for their MNO plans. Thus, this reduces barriers to entry for consumers. But, more importantly, the satellite industry has typically lacked the scale to develop mass market sales channels and, with this new model, wholesale agreements with MNOs will suffice to reach billions of subscribers. Signing up for a satellite service will be as simple as roaming to another network when travelling internationally. 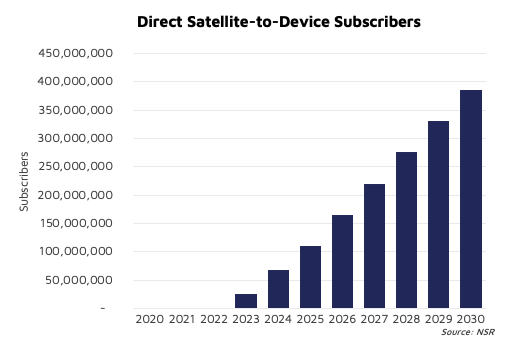 With these potential use cases in mind, NSR projects Direct Satellite-to-Device average monthly users to climb to 386M by 2030 (5G via Satellite, 2nd Edition report). If one adds the potential in IoT services, which will also benefit from the same Direct-to-sensor capabilities, this is undoubtedly the largest opportunity in satcom’s history.

Who’s Ahead in this Race?

As with anything related to Elon Musk, the announcement generated a lot of buzz. But as Mike Sievert made clear, the announcement was not about a product but a technology alliance and there are still many aspects to be defined. So, the plan to start services by end of 2023 seems to be extremely aggressive, beginning with the need to receive clearance to use terrestrial spectrum from space.

While it is clear that SpaceX has been working on this for some time (acquisition of Swarm, request to FCC to use 2 GHz spectrum band), there are other companies that are ahead in the process, like Lynk (Tower 1 is the first commercial cell-tower-in-space) or AST SpaceMobile (BlueWalker 3 test satellite by mid-September, first block of commercial satellites by end of 2023 and partnerships with MNOs representing more than 1.8 billion subscribers). Even traditional satellite MSS operators are working to open their existing constellations to mainstream devices like Globalstar (partnership with a “large, global customer to use Band 53/n53”) or Iridium.

Previous generations of mobile communications focused primarily on consumers and were very narrow in scope, operating independently from the rest of communications technologies. But the vision of 5G is much wider, offering a framework for integrating all other communications technologies to become a ‘5G network of networks’. In fact, the recently released 3GPP Release17 (the standard defining 5G) specifications support New Radio (5G’s waveform) based satellite access. Meaning that a future 5G device incorporating these specs will be able to directly communicate with satellites.

This is transformational for satcom as it opens the opportunity to become mainstream, with the extraordinary business opportunity that comes with it. The inclusion of satellite in the 3GPP scope has been the key trigger for this market with major groups forming to develop the base technology (MediaTek-Inmarsat; Ericsson, Qualcomm and Thales, etc.).

The expectations in terms of performance are quite clear: direct satellite-to-device will not be able to match terrestrial performance or even traditional VSAT links. The focus for these services is coverage, not throughput density. Power will be a huge limitation given the characteristics of the link. But low data-rates are perfectly fine for many use cases such as voice, messaging or IoT. Elon Musk mentioned 2-4 Mbps per cell (each cell can typically measure 100s of km in diameter), a capacity that will be shared among all the users in the same cell.

There are in fact 2 different paths to achieve direct satellite-to-device connectivity:

Let’s be clear, satellites won’t be a substitute for terrestrial solutions in dense population areas (>95% of Telco business), but they can be a nice addition to the network offering ubiquitous coverage and unlocking new use cases in remote areas.

From a satcom perspective, it is important to consider the limited performance of these solutions together with the much higher bandwidth cost, unable to match what is offered by VSAT platforms. So, the risk of cannibalization of other satellite services is low. Direct Satellite-to-Device will basically open a new greenfield opportunity.

Direct Satellite-to-Device is the largest opportunity in satcom’s history and will be soon a reality with the inclusion of Non-Terrestrial Networks in the definition of 5G and multiple innovators working to make the technology happen.

The risk of cannibalization for traditional satcom or terrestrial alternatives is low, but, given the size of the opportunity, ignoring the market does not seem to be an option.

Different approaches are possible. Using MNO existing spectrum might offer some short-term benefits in terms of backwards compatibility, but MSS spectrum appear superior in the long run due to performance and regulation.