Home > The Bottom Line > Fixing Up the FSS Market

Fixing Up the FSS Market

September 7, 2017 by Jose Del Rosario | More from this Analyst | Profile

When looking at future growth opportunities for satellite operators, most revenue growth will come from HTS, with this corresponding to the significant amount of HTS capacity entering the market over the coming years. However, as NSR shows in its Global Satellite Capacity Supply & Demand, 14th Edition, nearly 90% of satellite telecom revenues today come from traditional FSS C-band/Ku-band/Ka-band (i.e. non-HTS capacity). Furthermore, while this figure will decline to around 40% of all satcom revenues by 2026, this is more a reflection of the growth of HTS than of the decline of FSS, with traditional FSS still representing a $10B market in 2026 (down from ~$12B today). Ultimately, there will remain several key drivers of traditional FSS capacity demand into the future.

Satellite operators have been focusing on optimizing CAPEX and maximizing throughput given spectrum limitations on FSS satellites, as well as HTS ones. Factors such as lower launch costs, increasingly cost-efficient payloads, and higher spectral efficiency offered by ground terminals have led to a significant reduction in the possible cost per bit on not only HTS satellites, but also FSS ones. While HTS tends to have an advantage in raw throughput terms, a highly efficient FSS satellite offering the added benefits of, for example, a C-band hemisphere beam with potentially less rain attenuation, has been received as a highly attractive value proposition by several large and growing verticals. 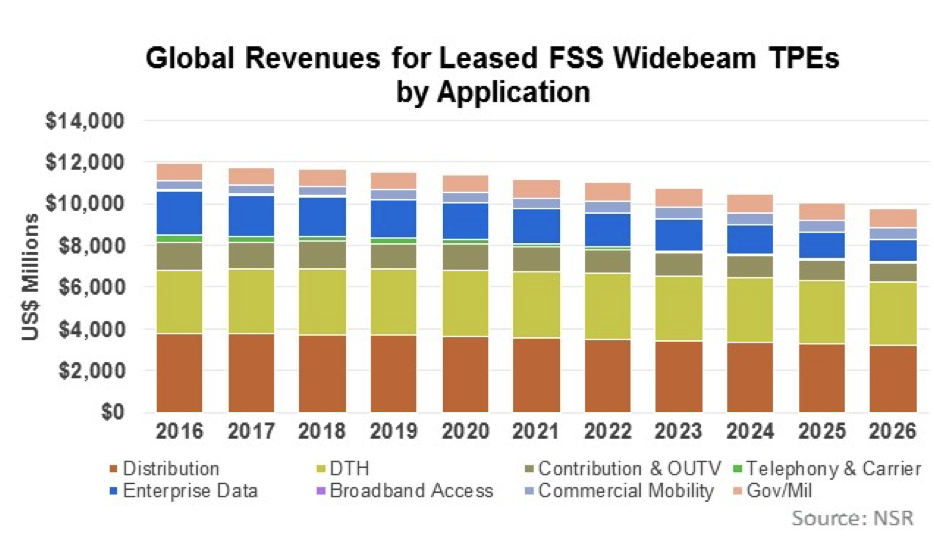 Perhaps most apparent of these has been trunking; a vertical that had seen negative growth rates for years due to secular decline in the number of unconnected homes has recently seen a renaissance via satellite due to lower cost per bit enabling better economics for the end user. While much of this new demand has been captured by HTS (specifically Non GEO-HTS system O3b), several FSS players have inked trunking contracts for hundreds of Mbps over the past year, including most recently ABS in Southeast Asia. NSR expects that the total enterprise data market (which includes trunking) via FSS by 2026 will be around 2,000 TPEs, a decline of around 1% per year. Revenues will decline by around $1B to 2026, ending at around $1.1B, however the market will remain relatively dynamic, with price-sensitive customers that benefit from low switching costs being willing to change connectivity provider if a more aggressive price arises. This will present unique opportunities and challenges to satellite operators with capacity that can address this market, including finding ways to make the capacity “stickier” for the customer, or accept commoditization and try to find ways to compete on price. Advancements in bandwidth efficiencies for FSS widebeam satellites will make this a more competitive market.

Not Tuning Out TV Just Yet

Despite a shift in consumer viewing patterns, video transmission via satellite is expected to remain a large FSS market for the foreseeable future.  As the above chart shows, revenues for DTH are expected to peak around 2020, though by 2026, revenues from DTH, video distribution, and contribution will still exceed $7B. Channel counts are forecast to increase in much of the developing world, and parts of the developed world as well, and operators are expected to maintain relatively high prices for capacity located at prime orbital slots. A recent contract between Eutelsat and Arqiva for TV broadcasting that was signed at a higher price than the previous contract was but one example of the prevailing value proposition of satellite for point-to-multipoint transmission.

The satellite value proposition for video broadcasting will be less influenced by advancements in things like spectral efficiency and better CAPEX economics, and more so influenced by the extent to which satellite operators can provide turnkey solutions for content delivery. This type of strategy has been pushed by opearotrs such as SES, which combined SES Platform Services and 2016-acquired RR Media to form MX1, a wholly-owned SES subsidiary that looks more like a content company than a satellite one.

HTS justifiably captures much of the attention as it relates to satcom growth, but even in a decade’s time, there will still be a sizeable FSS market. With nearly $10B in top-line revenues in 2026, the FSS widebeam capacity market will see several different verticals providing opportunities for those who innovate in ways that serve these new markets well. This will require a multi-pronged approach, with verticals such as trunking and video seeing very different requirements for value proposition, but operators that execute well will still find a lucrative market.