December 1, 2022 by Carlos Placido | More from this Analyst | Profile

Satcom LEO constellations are often assessed through the lens of the last-mile, end-user perspective. This side of the business is where constellations’ missions are ultimately realized so focus is rightly put on deliverables such as user IP bandwidth, visible satellites and the cost of terminals. Nevertheless, having a good understanding of the end-to-end architecture can be important for teleport operators, telcos and specialized satellite service providers exploring partnering opportunities with non-GEO satellite operators. This is because the ground network has a direct impact on service delivery and the ability to strike synergic partnerships.

First-generation LEO-HTS satellites largely lack in-space connectivity, so where and how gateway stations are deployed become driving factors. Regardless of the type of deal negotiated,  there are two key questions linked to ground stations:

NSR’s Non-GEO Constellations Analysis Toolkit 3.0 (NCAT3) includes editable data points and configurable tools to address these and other questions, which can be answered factually and with good precision for any Non-GEO constellation system. This article leverages the NCAT3 toolset to dive into possible forward-looking scenarios for OneWeb and the ground infrastructure being assembled with partners.

OneWeb’s network deployment is progressing well. With its 14th launch in October, OneWeb brought the constellation count to 462 satellites, reaching over 70% of the planned 648 (first-generation) satellite fleet. Based on the orbital mechanics of a partially-deployed polar shell, and the location of operational gateway stations (which OneWeb calls “Satellite Network Portals”),  OneWeb is already able to offer connectivity in regions north of 50-degrees latitude. This article projects possible scenarios for the end of 2023 and beyond, once OneWeb’s gen-1 polar shell is fully deployed and additional gateway stations become operational.

OneWeb’s serviceable areas can be calculated and displayed on a map based on constellation design factors that include the location of gateway stations, satellites’ orbital altitude and the minimum elevation angle for user and gateway antennas, which OneWeb defined as 55 and 15 degrees respectively. Even when completing the constellation, the distribution of the gateway stations will be key since coverage is determined by the fact that each gateway station can reach user terminals that are within a ground distance of -at most- 2.9 thousand kilometers.

NCAT3 includes data for over 170 Non-GEO gateway stations planned or enabled by constellation players. This is based on information extracted from official announcements and other sources. Once OneWeb partners have installed and enabled 14 of the pre-surveyed OW stations, the service will be ready to reach over 240 million square kilometers, or 48% of the Earth’s surface (land and sea). 5.7 billion people reside under such coverage. 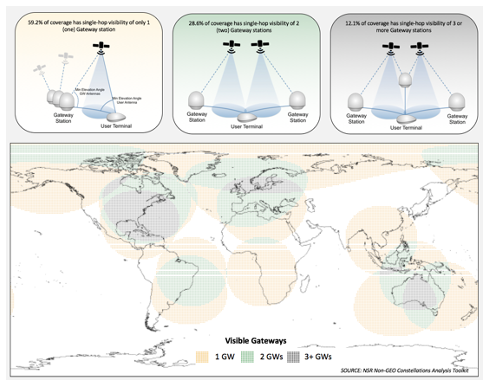 Roughly 40% of the NCAT3-computed service area will count with redundant gateway connectivity (two or more visible gateways) but if OneWeb enabled additional gateway stations in India, Kazakhstan, Ghana and Portugal (locations currently unconfirmed), the addressab­­­­le population would extend to 6.9 billion (87% of the global population) while also improving connectivity for North Atlantic mobility routes.  Yet, even after achieving quasi-global coverage, OneWeb will likely seek to expand its core ground network further so as to improve core-to-edge resiliency via gateway path diversity. The ideal long-term scenario is that any serviceable point will have the ability to connect to two or more gateways.

Because of OneWeb’s fixed-beam satellite design, the number of visible satellites does not determine the amount of provisionable capacity at end-user sites, but gateway stations do use steerable beams. Therefore, the number of antennas needed to be able to connect with all satellites visible 15 degrees over the horizon varies, impacting both the space and fiber capacity required from the OneWeb station partner.

For example, OneWeb and Paratus Group recently announced a multi-year agreement to build a gateway in Luanda, Angola, expected to be operational in the second half of 2023. The teleport will consist of 16 antennas and a network hosting facility. A large portion of Sub-Saharan African region could be reached via this station. The number of antennas mentioned in the announcement matches NCAT3 calculations for Luanda when considering re-trace and spare antennas. NCAT3 also computes over 100 Gbps of IP transit capacity to serve all visible satellites without core network contention; so it reasonable that OneWeb has made such deal with a player that counts with substantial fiber and data-center resources. 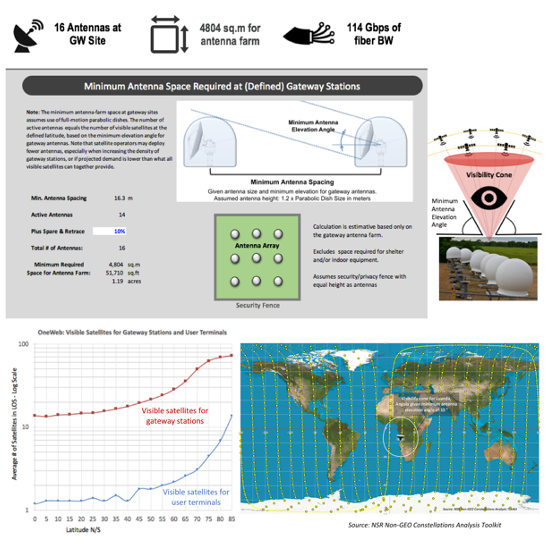 Possibly the most critical aspect for partners housing the antenna farm is determining how much land space is required for antennas since each needs to have a non-blocking 360-degree view of the sky. This can vary widely depending on the location and the constellation system. OneWeb tends to use 3.5 meter parabolic antennas for gen-1 gateways. Each antenna needs to count with its “visibility cone” of the sky above 15 degrees of elevation driving the need for proper antenna separation. While the PR did not provide further details, NCAT3 estimates 16 meters of separation among the antennas; totaling 4,802 square meters (1.19 acres) of land area dedicated to house the 16-antenna farm.

Photos of the OneWeb gateway antenna site in Alaska surprised a few observers because of how extensive the station is compared to the Starlink gateways. But when running simulations through NCAT3, it becomes clear 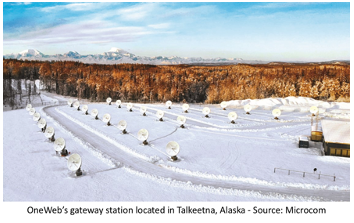 that the station size is the direct result of how OneWeb conceived its phase-1 polar system, given that satellite altitude, gateway antenna size and minimum look angles drive -both- the need for space and IP transit capacity at the core ground stations.

The satellite industry has always been characterized by tradeoffs and the gateway station aspect of constellations is no exception. In the absence of optical inter-satellite links (OISLs) for gen-1 HTS LEO satellites, OneWeb requires fewer but larger stations than SpaceX’s Starlink, highlighting the need for long-term, strong partnerships with teleport owners.

NSR’s Non-GEO Constellations Analysis Toolkit 3.0 (NCAT3) is an assembly of analytical models that x-ray and benchmark LEO and MEO satellite constellations factually.   With updateable datasets, configurable filters and user-defined inputs, NCAT3 is a standalone product that may be leveraged in combination with market data and insight extracted from relevant NSR and Analysys Mason research studies.