Currently, there is much debate surrounding the viability of In-Orbit Servicing applications in the space industry. Despite some recent setbacks and perception of uncertainty surrounding upcoming IOS Services, GEO satellite life extension is garnering most interest out of all IOS offerings, and the demand is expected to increase over time. With government and military sector forming an overall lower share of the market, and several hurdles in the way, the question remains: is this a viable option for government and military operators?

NSR also forecasts $300 million in cumulative revenues for GEO Life Extension for the government and military segment, much lower than the $1.6 billion for the commercial players. Government players are traditionally more risk averse, which limits their demand for IOS services until the latter part of the decade. 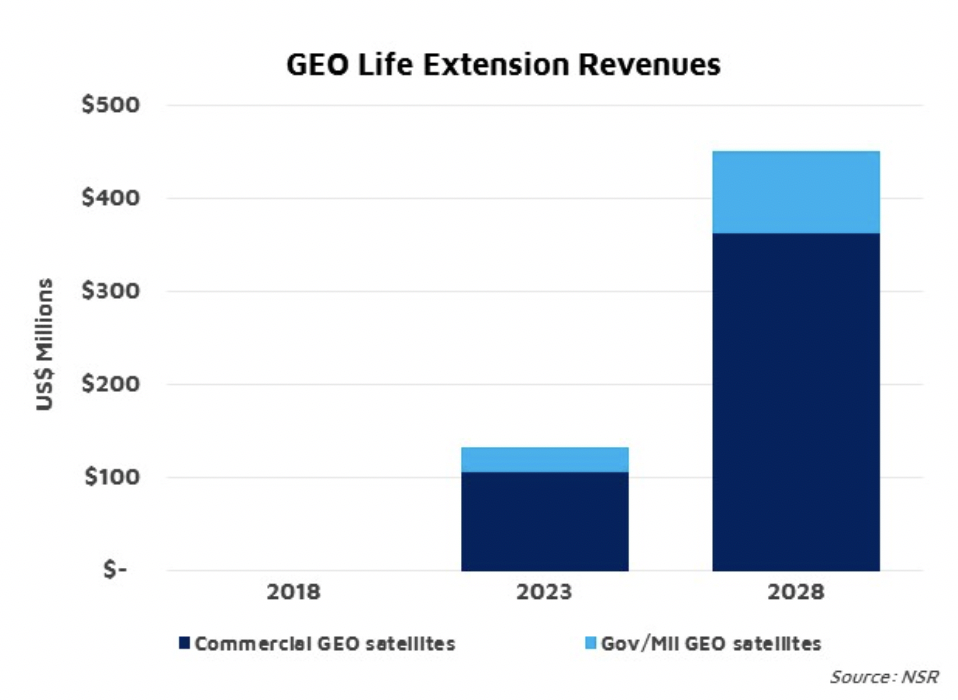 The recent “reprogramming” of U.S. government funds allocated to the Air Force’s Evolved Expendable Launch Vehicle (EELV) due to the cancellation of the STP-4 mission meant to launch the Robotic Servicing of Geosynchronous Satellites (RSGS) is somewhat a consequence of Maxar’s withdrawal from DARPA’s RSGS, a key enabler for IOS within government. Despite this unexpected pull-out from a key supplier, DARPA has not cancelled the RSGS program. In fact, it is planning to select a new partner to replace Maxar from the industry and is holding a Proposer’s day in May with the stated aim to continue the project. Maxar is also not turning away completely from developing in-orbit servicing capabilities with/for government either, as it is actively involved with NASA on the Dragonfly and Restore-L projects.

One could consider the much-needed update of IOS mission regulations to catch up with the changes in this market a major hurdle. But it is not a key limiter for government and military missions. Still, the lack of clarity still limits demand across the industry, which plays further into the perception of uncertainty for this market segment.

The skepticism and uncertainty surrounding the nascent IOS market is caused by a lack of in-orbit demonstrations, ambiguity surrounding regulatory and legal issues, and some setbacks, albeit circumstantial, as noted above. As with any nascent market, some delays can be expected but the overall government demand for life extension is expected to increase after the initial missions, the first of which is on schedule to be launched later this year. Given the large number of commercial satellites in GEO, it is almost intuitive that this segment’s demand forecast is much higher than for gov’t/mil. sector, but continued development in IOS within the government market points to a good fit for GEO servicing in the longer term.