Home > The Bottom Line > Has the Space SPAC Train Left the Station?

Has the Space SPAC Train Left the Station?

The U.S. stock market is on its longest bull-run in history, which began in 2009. A decade later Virgin Galactic’s reverse merger with Social Capital Hedosophia raised $800M for the Space Tourism company, signalling the beginning of an extraordinary run in space investment.

The significant increase in investment activity for space can partly be explained by the continued cheap access to capital due to low interest rates and a sign of a maturing NewSpace ecosystem as more VCs exits from early stages. As discussed in NSR’s Emerging Space Investment Analysis, 3rd Edition,  a surprising number of deals happened through a little-used investment vehicle known as a Special Purpose Acquisition Company (SPAC) to accelerate IPOs of launch, Earth Observation and satellite communications start-ups.  But cooling signs already point to investor fatigue in the vehicle with a significant decrease in recent SPAC filings as well as SEC investigations taking place. Does it signal that the space SPAC train left the station?

A Year to Remember

2020 was promising and will be known as the year of space M&As. Voyager Space Holdings and Redwire acquired several NewSpace companies in a vertical integration or roll-up strategy, with Redwire now going through a SPAC of its own . Exits being historically rare in the industry, the last two years have offered a strong contrast to what was considered the norm.

For investors, increased exits will spur and reaffirm their investment beliefs. Near-term, the impact of the recent flurry of SPACs will be felt by entrepreneurs soliciting VC funds. SPAC players are unlikely to raise more funds in the near term, which should leave VCs with more money to invest in other promising space ventures.  As a result, the type of investors we are seeing in space is growing and thus, the space SPAC investments may be a telling sign the industry is maturing in the eye of those with money to invest (See Figure 1). 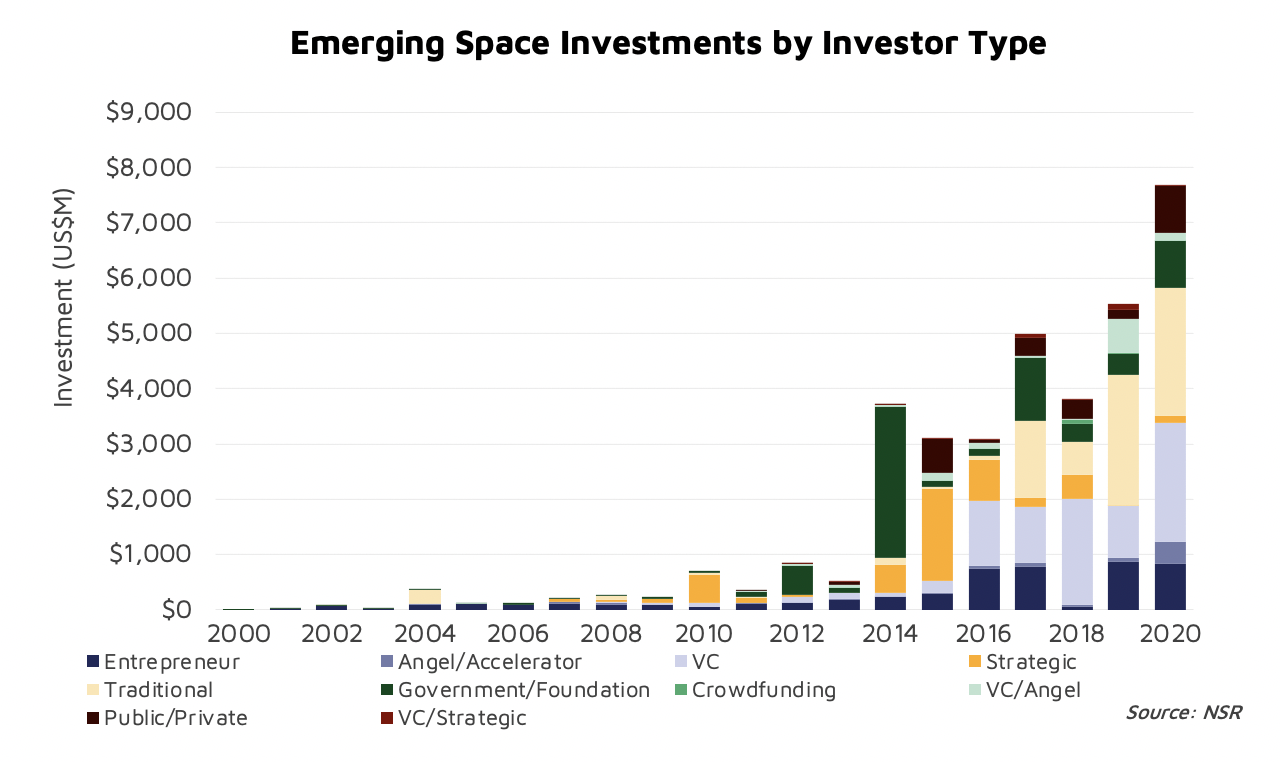 SPAC advantages are speed in relation to the classical IPO route and the ability to raise a large amount of funding at low dilution. Of particular note, those involved in the industry claim being a publicly traded entity brings additional credibility and facilitates dealings with the space industry’s main customer: the government.

More evidence of the maturing NewSpace ecosystem and the capital employed can be seen in the break-down of the space verticals represented in the companies undergoing SPAC. The launch business, space’s most capital-intensive vertical and overall enabler, raised $4B in 2020, dominated by investments in SpaceX and Blue Origin. In comparison, Astra aims to raise $489 M and Rocket Lab has earmarked $750M through their respective SPACs.

Emerging players in the Earth Observation market raised $677M, with Spire and BlackSky counting on a combined sum of $920M through their reverse mergers. Finally, the connectivity market, a major battleground for OneWeb, Elon Musk’s Starlink and Jeff Bezos’ Project Kuiper, saw emerging space player raise $360M in 2020. In comparison, AST SpaceMobile expects to raise $462M in gross proceeds from its reverse merger.

With all this money going to an industry that is usually reserved for the few savvy venture capitalists, opportunities for retail investors through these SPACs is unique, as they are usually excluded from space deals due to lack of access.  With increased visibility for the industry, they have more options now to invest in space, such as through the recently released Space ETF ARK Space Exploration & Innovation exchange traded fund and the NewSpace SPACs. Thus, they form a new breed of fresh funding resources that can be tapped in capital markets.  However, the risk associated with SPACs needs to be taken seriously, in particular when it comes to the evolution of the company’s valuation often based on wildly optimistic revenue goals. One notable criticism of SPAC is its use as a pump and dump scheme (the most recent example being Quantumscape). Moreover, the market can be unforgiving when revenue and profitability expectations are not met, compounded by the difficulties the industry would face if the economy were to slow down.

Cheap access to capital made 2020 a memorable year for space investments and has jump started 2021 with SPAC announcements. Emerging Space investments today are a 10-year overnight success story, when seeds were planted long ago, required continuous cash infusion and relentless innovation on multiple fronts to close business cases.

The record raise of 2020 should add more fuel to the fire of investment in space companies, part of a future expected to generate $1 T by the end of this decade. NSR expect investors to show continued confidence and support regardless of the SPAC frenzy, whose impact on the industry will be clearer within the next few years.  But in the meantime, should interest rates rise, the SPAC opportunity weaken, and some VCs continue to exit, there is a risk for some space companies that the SPAC train of large funding rounds with low dilution might have left the station already.