Home > The Bottom Line > Lasers: Too Fast for Satellite?

Lasers: Too Fast for Satellite?

February 27, 2020 by Shivaprakash Muruganandham | More from this Analyst | Profile

The last few years have seen increased optical activity as network operators look to new technologies as an emerging alternative to RF.  Optical is expected to address challenges of the RF comms ecosystem, especially around data rates, link availability, reliability and security. While such technological advantages are a welcome change, other factors such as cost and market maturity will play a key role in the adoption of optical wireless communications in space. In other words, will the use of lasers in our industry keep pace with the (very) high expectations to deliver increasing volumes of data over satellite networks?

As of 2019, plans for more than 25,500 satellites to launch have been announced, ranging from Comms and Earth Observation to M2M/IoT and Space Situational Awareness applications. More than one such constellation has proposed the use of optical Inter-Satellite Links (ISLs), and these are expected to be the real enabler of large volume production of Laser Communication Terminals (LCTs) in the coming decade.

Then There Was Light

Despite being an unproven technology for such a use case, LCTs provide the dual benefit of circumventing regulatory constraints associated with landing rights and drastically decrease the number of ground stations required. As such, NSR expects major constellation operators to slowly ramp up on the adoption of LCTs on their satellites and develop ISL-enabled constellations in phases.

NSR’s Optical Satellite Communications, 2nd Edition report projects a $3.8 billion cumulative opportunity through the coming decade for space-based laser communications. Despite recent moves across the value chain, the market remains largely a hardware play, with a majority of the revenues flowing to equipment manufacturers, growing at a CAGR 10.1% in the 2019-2029 period. 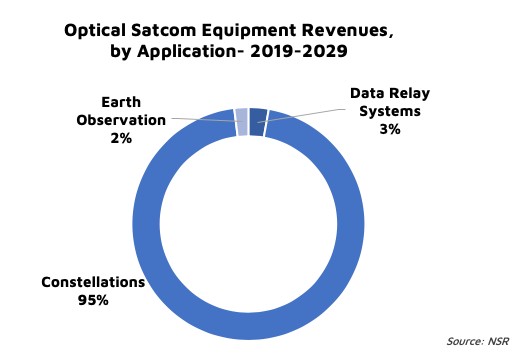 Last summer, BridgeSat announced its rebranding to BridgeComm, to signify its deepening involvement in markets adjacent to the space sector alone, with the aim of being a provider of optical wireless communications (OWC) at a larger scale. Alongside ongoing advances in 5G, the coupling of terrestrial and aerospace connectivity markets is more apparent in the case of laser-based communication solutions.

R&D efforts into free-space optical (FSO) comms on the ground are expected to spur advances in the satellite world, further blurring the line between space and terrestrial comms solutions. Organizations with an expertise in high-end optoelectronics and photonics have now begun to delve into the satellite world, in some cases, partnering with satcom market players to develop integrated products and services in the future. BridgeComm’s partnership with French photonics startup, Cailabs, to adopt the latter’s Multi-Plane Light Conversion technology into its OWC solutions is one such move. The Netherlands’ TNO is driving such innovation by bringing together various Dutch organizations involved in optical systems (VDL, Nedinsco etc.) and space (Airbus DS, Hyperion Technologies etc.).

However, this market is not wrought without its challenges. Over the last year alone, we have seen at least two space businesses close down due to funding issues, both systems which were expected to be built on laser-com linked satellite constellations: LeoSat and Audacy.

When LeoSat suspended operations in late 2019 due to a lack of investment, it was seen as the first casualty of the LEO HTS constellations race, wherein laser links were a core component of its proposed satellite system. Meanwhile, despite MoUs from customers and an FCC approval, Audacy faced difficulties in securing the right product-market fit as an investment opportunity.

Developments in space alone are only half the story. To really capture the space markets, the ground segment will remain a key element to be addressed in the roadmap towards an integrated optical communications infrastructure (such as that proposed by Laser Light Communications, for instance).

Ground station operators such as KSAT have actively pursued partnerships in the past year with the goal of introducing full optical communication capabilities for upcoming small satellite missions. Mynaric, meanwhile, has moved from project to product, with production of optical ground stations and lasercom terminals going side-by-side. On the other hand, owing to the inherent technological challenges of space-ground lasercom, services will be limited to a few niche applications alone in the near-term, ranging from EO data downlink services to trunking/backhaul communications. RF then, is expected to dominate the ground segment for the foreseeable future in most other applications.

As NSR noted in the past, optical today is where RF was a few decades ago. Technology exchange between terrestrial and space-based communications players is expected to drive the development of next-gen solutions, as the addressable market pie increases to include the wider communications sector.

At present, the adoption of optical is contingent on many factors, most important being that constellations are able to close business cases and attract the right funding. Ground infrastructure development remains a significant challenge from both a technology and business perspective and will need to be realized before the business of optical satcom can really see the light.