Home > The Bottom Line > LEO Speed: When Milliseconds are Worth $Millions

LEO Speed: When Milliseconds are Worth $Millions

“Remember that time is money” wrote Benjamin Franklin in a 1748 book.  The concept of opportunity cost believed to trace back to ancient Greek philosophers but popularized by one of the founding fathers of the United States, may nowhere be more critical to business than in the realms of high-frequency trading (HFT). Planned LEO and VLEO (Very Low Earth Orbit) satellite constellations cannot provision data rates as high as fiber cables when connecting major cities. Yet, speed is also about link delay and a subset of these high-throughput satcom initiatives will be able to offer lower latency than fiber across long distances, a situation that could foster wider interest in satellite constellations by financial players.

A large portion of trading today is happening between computer servers with sophisticated algorithms that trade hundreds of thousands of times a second, seeking to repeatedly make small amounts of profits over tiny periods of time. Stock price is subject to constant change, leading to arbitrage opportunities that HFT algorithms seek to quickly capitalize on via speed of execution. Whoever accesses information first has an enormous advantage in speculative markets so, in the age of cloud computing and artificial intelligence, promptly leveraging data can provide a solid competitive edge. Disregarding the controversies around HFT including market-crash risks derived from relying too heavily on computers that play robot wars and make snap decisions on behalf of humans, it can be plausibly argued that a competitive edge of 10 milliseconds is worth millions of dollars for hedge funds and other financial trading stakeholders.

Let us benchmark satellite and fiber link delay between two of world’s most connected financial districts: New York City and London. It is a fact that light travels faster in vacuum so based on NSR’s Non-GEO Constellations Analysis Toolkit, even the shortest-path, “great circle” submarine fiber connection between New York and London has 28% higher propagation delay than a LEO constellation with satellites orbiting at an altitude of 550 kilometers (or lower), provided satellites have inter-satellite links (ISL). 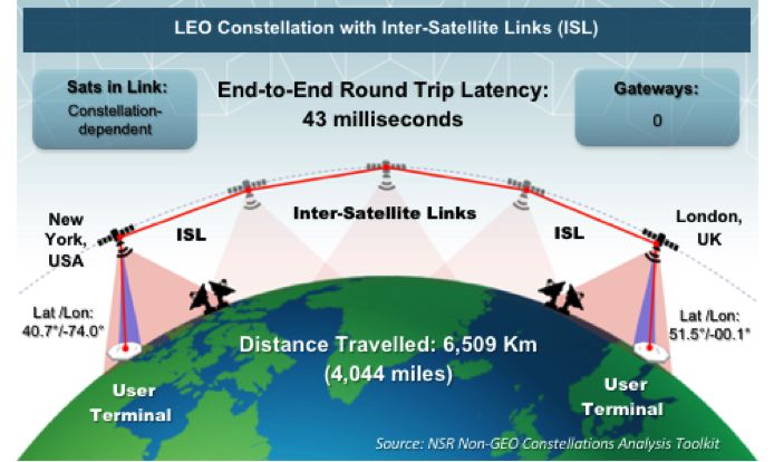 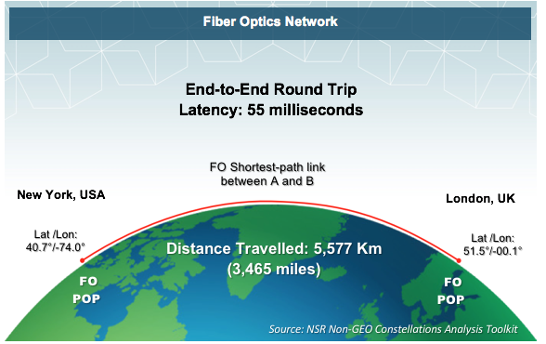 A LEO satellite constellation with orbits at an altitude of 550 km can be 12 milliseconds faster than fiber optics (round trip propagation latency). This is a theoretical benchmark that ignores jitter (satellites are on the move) and processing delay added by active equipment (such as demodulating/remodulating signals) but note that if the satellite network can be configured in cut-through mode across ISLs to minimize processing, the delay introduced by the two end point modems can be negligible. As an example, using Datum’s performance calculator (actual satellite modem implementation) a DVB-S2X Carrier at 155 Mbps with 64K FEC Block introduces only 0.3 ms end-to-end.  Thus, even multiple link legs (with different ModCods) could result in a negligible FEC processing latency.

Interestingly, when running alternate satellite and hybrid satellite-fiber scenarios on NSR’s Non-GEO Constellations Analysis Toolkit, it can be found even without ISLs, a 550 km or lower altitude constellation shell may still beat fiber optics’ shortest-path 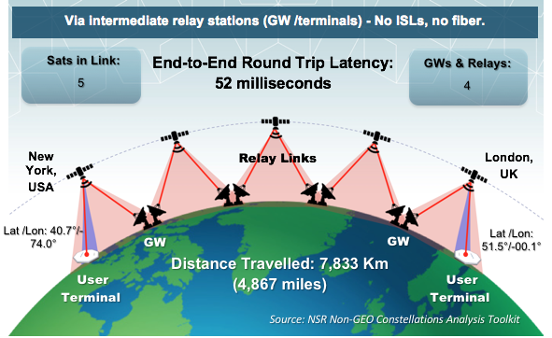 propagation latency by a small margin – assuming no terrestrial interconnect segment. This “ground bounce” scenario, as coined by Elon Musk, assumes use of intermediate “relay stations” (either plain Gateways used as “pivots” or user terminals with peer-type interconnect capabilities). Note that the NY-London example may not the best example for such particular scenario given difficulties in deploying relay stations in the middle of the Atlantic Ocean but it paints the picture.

Even classic “Hub & Spoke” satcom network topologies employing terrestrially interconnected gateway stations at one or two ends could -in theory- provide lower propagation delay than fiber; albeit by small margins for the 550 km altitude case. Given delay variations introduced by satellites on the move, these topologies may not provide much advantage in practice, so ISLs will be key.

The idea of pushing the limits by leveraging alternate technologies to achieve the lowest possible link latency is not new. This is one reason why microwave links connect the Chicago and NY stock exchanges but LEOs and VLEOs could extend such ultra-low latency capabilities to distant exchange sites. There is, interestingly, a past satellite attempt: LeoSat, which in 2019 needed to go back to the drawing board to reduce the constellation’s price tag, saw the opportunity and announced in 2016 that it had entered into an agreement with an (undisclosed) globally operating financial trading company with offices worldwide.

The analyzed NYC-to-London “fast LEO lane” is one example involving two large financial districts, but consider the implications for the interconnection of other major stock-exchange cities that are further away from one another: Tokyo, Shanghai, HK, Frankfurt, Milan, Mumbai, Seoul, Sydney, Sao Paulo, Singapore, Moscow and other important trading cities. For these cities, the latency gap between fiber and LEOs to reach Wall Street is even higher.

“Time is Money” so the low latency of LEO and VLEO satellite constellations can have important business implications for latency-sensitive markets. High Frequency Trading (HFT) is a relevant application given the importance of ultra-low latency to the world of algorithmic-based buying and selling of shares, where a competitive edge of 10 milliseconds may be worth millions.

All LEO scenarios displayed in this article assume 550 km orbital altitude and a minimum antenna elevation of 40 degrees, which is another important factor when benchmarking constellations. Lower antenna angles (such as 25 deg. as proposed by Starlink for the initial phase) may have visibility constraints but can: 1- Reduce number of Gateways or relays; 2- Reduce traveled distance and delay. Thus, the latency gap vs. fiber goes up, particularly for the “ground bounce” case. NSR’ Non-GEO toolkit simulation for such scenario is not included in this article to avoid confusion but, assuming 25 deg. elevation, the “bounce” scenario’s latency is reduced from 52 to 43 milliseconds (interestingly same as “ISLs scenario” with 40 deg. elevation)