In the midst of  ‘Apple-mania’, two important announcements in the satcom business were made that are key to the future development of the Maritime satcom market.  SES announced its ‘next generation’ MEO-centric network architecture called mPOWER and Kymeta’s sea trials in the Super Yacht sector for its KyWay terminal were concluded.  Both are significant because it signals SES is set on expanding the maritime satcom market share of O3b and Kymeta’s aiming to increase the total addressable market for satellite services in the same segment. 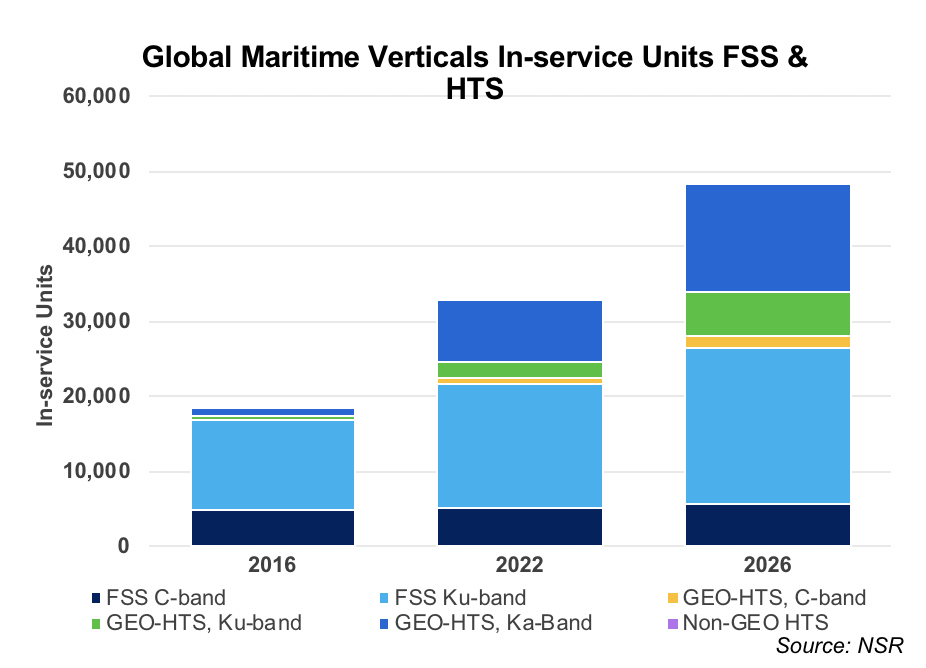 As NSR’s Maritime Satcom Markets, 5th Edition projects, the market for Non-GEO HTS connectivity in terms of In-service Units pales in comparison to GEO FSS and HTS.  With over 48,000 In-service GEO VSAT terminals expected by 2026 in the maritime SATCOM markets, compared with less than 200 sites for Non-GEO plays, it is easy to see why SES aims to expand the marketability of an O3b-based solution.  It does  help add clarity a few fundamental restraints to the current O3b network:

Yet, it still leaves a few unanswered questions on the table, mainly – does this represent a ‘pie expansion’ or more ‘pie eating’?  Amongst this ‘ecosystem of partners’, who will play the role of Service Provider or Systems Integrator?

With non-GEO HTS solutions mainly targeted towards larger sites or heaviest consumers (Ocean cruise, offshore E&P rigs/platforms, etc.), any movement ‘downstream’ in terms of terminal footprint, minimum capacity purchase, or larger coverage area can greatly increase the addressable vessel pool for an O3b-based solution.  As the incumbent provider of these solutions, it can additionally rely on a proven track record and with access to SES’ GEO fleet, additional flexibility, to capture skeptics who might be on the fence about adopting other competing non-GEO HTS offerings.  Similarly, the deployment schedule will put the mPower solution right in the path of competing non-GEO HTS launches –before most can be suitable for maritime applications.  Also, as mentioned during the SES Press Conference, the additional investment in mPower offset the replacement costs of two GEO satellites they had provided guidance for in their financial statements. Overall, mPower will aim to convert current maritime satcom customers that fall into the ‘upper-middle’ range, and ultimately expand the market share of Non-GEO HTS.

Kymeta’s sea trials on the MV White Rose and SY Maltese Falcon bring smaller, lighter, simpler broadband maritime terminals closer to reality.  According to NSR’s Maritime Satcom Markets, 5th Edition report, broadband satcom penetration of the maritime market stood at only 16% in 2016.  While by 2026 that number will only increase to 19% market penetration, most of the growth will come from VSAT-equipped vessels rather than MSS-based Broadband connectivity solutions.  In real terms, that is more than 23,000 vessels expected to be outfitted with VSAT connectivity between 2016 – 2026 vs. 4,300 vessels for MSS Broadband.  Flat Panel Antennas such as Kymeta and others will be a key piece of the puzzle alongside falling capacity prices to help close the gap between addressable vessels, and broadband vessels and expand the maritime satcom market.

Although announcements like these do not generate millions of views like an Apple product launch, for maritime satellite communications they will shape the industry for the next decade.  With vessels requiring more connectivity each year, creating scalable products and services to match end-user demand against their pricing constraints will be key for the industry to grow the market pie, instead of eating into what is already a small pie.