The smallsat manufacturing and components market has developed somewhat haphazardly – a combination of post-university projects, commercial start-ups, and established companies growing into the smallsat business – producing a multitude of players in an increasingly competitive market. M&A is the natural consequence for this young market as it matures and companies seek to consolidate market share. Recent deals provide an understanding of what players are hoping to accomplish by aligning their interests, and what this might mean for the smallsat industry at large.

While instances of such M&A and partnership activity are limited considering the vast number of component and platform manufacturers active in the smallsat industry, its importance within the lens of expanding demand for smallsats is meaningful. NSR’s Small Satellite Markets, 4th Edition, found the annual launch rate will approach 600 satellites by 2026, a more than four-fold increase over 2016. 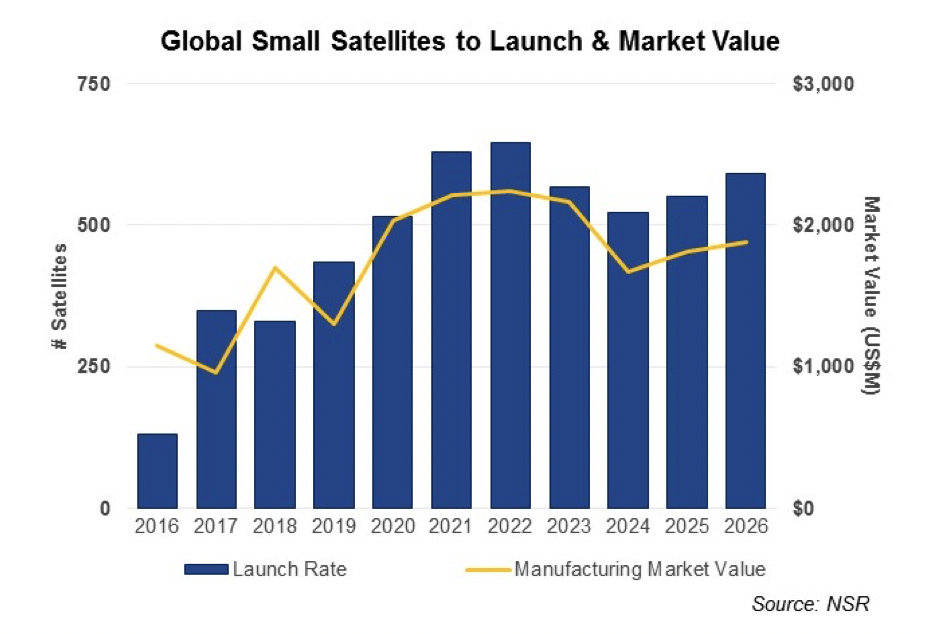 This level of activity will generate a total $17 billion in manufacturing revenue. As the market will progress towards fewer, bigger contracts alongside consolidation within the operator space, each win is high stakes for manufacturers.

The smallsat manufacturing market is in the early stages of what will be an increasingly active M&A period as competition heightens. The consolidated manufacturing landscape that results should be beneficial to smallsat operators, as each combined entity will have a broader portfolio of solutions and the enhanced engineering team to solve complex requirements. In this environment smallsat manufacturers and component providers must be aggressive in securing market share – or otherwise leave themselves open to acquisition, or being squeezed out of the market altogether.