The state of play is clear: satellite capacity pricing continues to fall at an accelerated pace, and satellite operators are unable to generate sufficient additional demand, leading to revenue declines. Upcoming larger GEO-HTS systems, NGSO constellations and simply put, technology evolution, will continue driving prices down. In this context, (when) will demand elasticity reverse this downward trend in revenues? Cellular Backhaul offers a great opportunity with clear demand elasticity effects. 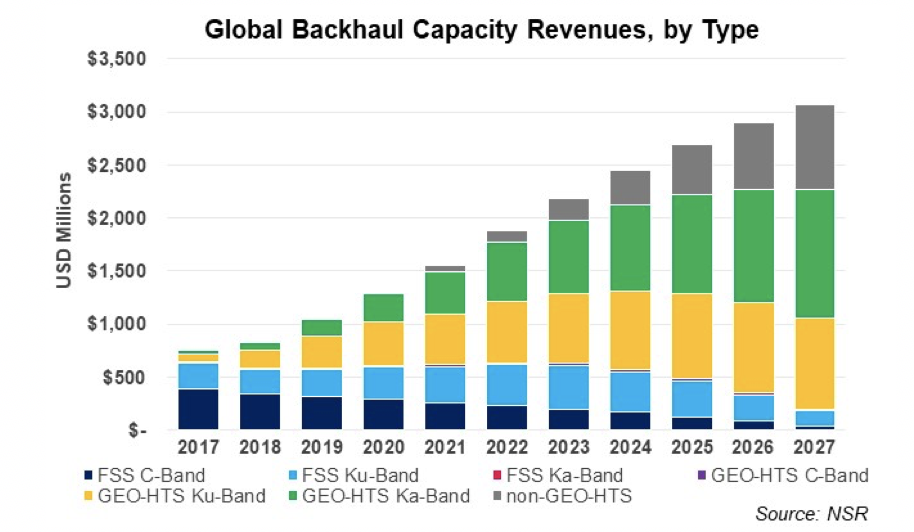 Cellular Backhaul is a key vertical for the satcom industry to return to growth. According to NSR’S Wireless Backhaul via Satellite, 12th Edition report, satellite capacity revenues will quadruple in the next 10 years, surpassing the $3 billion annual revenues benchmark by 2027. Despite this impressive long-term potential, the short-term picture is still challenging as demand take up lags and operators need to adapt to the new framework.

Demand for obligation-based sites is inelastic as MNOs do not have any incentive to boost demand despite lower price points. Hence, satellite operator revenues decline as capacity prices go down. Conversely, if price levels get to the point at which commercially-driven deployments are feasible, MNOs will have the incentive to increase satellite services demand as it would also have a positive impact on their own bottom line. All in all, satellite capacity revenues need to decline before being able to activate elasticity effects and generate growth again. Having said that, we are starting to see large satellite backhaul deployments that are mostly commercially driven with little incentive from regulators.

Regaining the Edge in Front of Ground Alternatives

If we take another point of view and analyze when satellite is more cost effective than ground alternatives, we reach a similar conclusion. Estimating the cost of serving a generic 3G site, one can observe how satellite gains terrain over ground alternatives as price of capacity goes down. The cost of providing a ground-based microwave link scales exponentially as population density decreases (multiple long-distance hops). Consequently, the gain reducing satellite capacity pricing from $1,000 USD/Mbps/Month to $500 USD/Mbps/Month is relatively small (as a reference, today’s average cost on satellite mobile backhaul networks is around ~$700 USD/Mbps/month), but if prices continue to decline, the population densities at which satellite can compete with ground alternatives will be much higher. 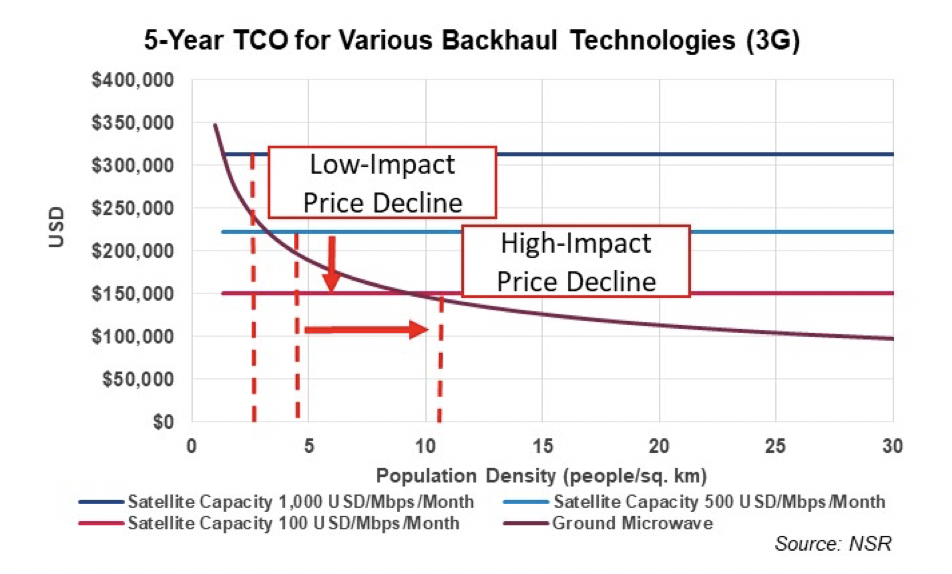 Capturing the Long-Tail of Low-Volume Sites

Taking yet another approach to assess demand elasticity in Backhaul markets, one could compare the cost per GB served for Satellite and Ground Microwave. Satellite is a very well-suited solution for sites requiring high speeds but consuming low volumes of data as it requires very low CAPEX investments but involves high variable costs. If the cost of satellite capacity goes down, the crossover point at which microwave is more cost effective than satellite moves towards higher traffic, expanding the addressable market for satcom. 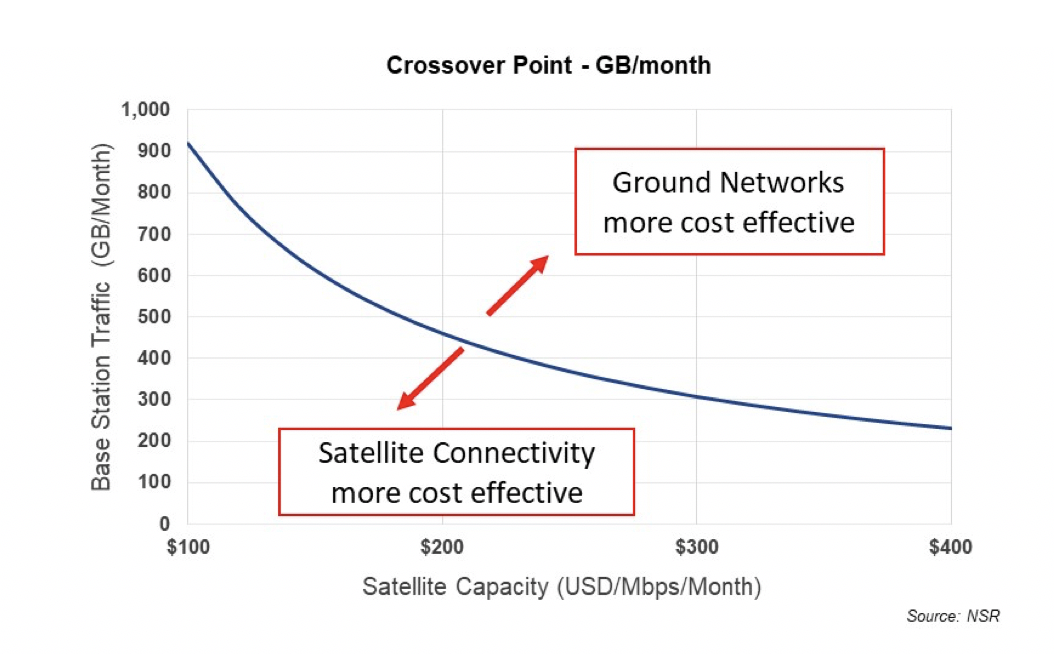 Similar to the previous analysis, the impact of current price declines in expanding the addressable market is fairly small (upwards of $400 USD/Mbps/Month, the curve in the graph above is quite flat), which again translates into smaller revenues as price declines. However, once the price falls below $400 USD/Mbps/Month, the data traffic at which satellite is more cost effective than alternatives grows very rapidly. This combined with the fact that traffic in mobile networks is concentrated (50% of the traffic is carried by just 15% of the sites) and there is a long tail of low-volume sites, the addressable market for Satellite Backhaul skyrockets when prices fall below $300 USD/Mbps/Month.

Cheap Capacity Alone is Not Enough

Cheap capacity is certainly one of the key drivers for demand growth. However, other aspects of the solution can’t be ignored. MNOs are still conservative when it comes to availability, and some players that are using higher frequencies are finding challenges, especially in rain fade regions. Additionally, some regulators require local landing of traffic, consequently space segment and ground segment must be flexible enough to satisfy those requirements.

Satellite capacity is the main contributor to “Total Cost of Ownership”, but other aspects should also be optimized (terminal, small cell, energy, etc.), especially at a time when MNOs are averse to CAPEX investments. Last but certainly not least, awareness, perception and convenience are still big barriers for the acceptance of satellite services, and the industry must offer very-easy-to-adopt end-to-end services.

Satellite capacity pricing continues to be under tremendous pressure, and satellite operators today are unable to generate enough demand to compensate, leading to generalized satellite capacity revenue decline. Having said that, there are some bright spots in specific verticals like Cellular Backhaul that show promising long-term revenue growth prospects.

Drivers are changing radically for Satellite Backhaul; from obligation-dictated remote sites to commercially-driven suburban deployments. If this transition is consolidated, the addressable market for satcom would go sky high. However, capacity prices need to continue downwards to truly activate demand elasticity effects.

One cannot forget that MNOs put high value in other aspects of the solution such as availability, reliability and CAPEX savings. Even if satellite becomes affordable, it still needs to raise awareness and provide an easy-to-adopt solution for MNOs.

As technology in the satellite industry continues to evolve at an accelerated pace, one cannot expect to fill a satellite x100 times bigger, with unit cost x10 times smaller (CAPEX/Gbps), in a highly contested environment. Capacity prices need to readjust to activate demand elasticity effects.