Non-GEOs continue to make noise, and for the right reasons. With SpaceX launching hundreds of satellites and revealing more info on their user antennas (with Musk admitting that the biggest challenge is cost of user terminals) to OneWeb restarting their production and awaiting a 36-satellite December launch, to Telesat forming a new public company post SSL acquisition – this space is becoming increasingly hot!

And if you haven’t kept up to date on the nuances on Non-GEOs offer vs. GEOs, or on other burning timeline, revenue, pricing questions, NSR offers a quick list of burning questions to catch you up via our HTS Constellation: A Critical Assessment, 3rd Edition report:

Expect the CAPEX $/Mbps/Mo to largely remain in the same range ($5-$10/Mbps/Mo) for ViaSat, Hughes and SpaceX on usable, uncontended capacity. Though Amazon is likely to break the $5/Mbps/Mo barrier with the first launch expected in 2024, making it more efficient. End-user ARPU is expected to largely remain the same around the $70-$80 mark, though LEO players offer better latency, while Amazon and 2nd Gen SpaceX will be able to provide end-to-end secure connectivity via inter-satellite links. The biggest plus point for GEO consumer broadband (ViaSat and Hughes) is the cost of user terminals ($250-$300), while LEO players are likely to offer user terminals in low thousands of dollars range.

Global telecommunications is a ballpark $2 Trillion industry, while satellite based internet is less than $20 Billion today, though growing at a fast pace of 10-15% CAGR. So, there is a long way to catch up for satellite sector, which has grown from critical communications in early 2000s, from serving unserved areas in 2010s to NOW defining the Mobility and Gov/Mil segments, and bringing efficiencies to compete in the underserved areas of the world. A lot of demand will come from Consumer Broadband and Backhaul use cases from Rural areas with USO opportunities, while Gov/Mil and Mobility will rake in the highest revenue per bit. Segments like Secure Fiber+CDN play will surely look to disrupt a small % of fiber, CDN and cloud security business, and is expected to be launched by the likes of Amazon, as they build e-2-e secure cloud services. 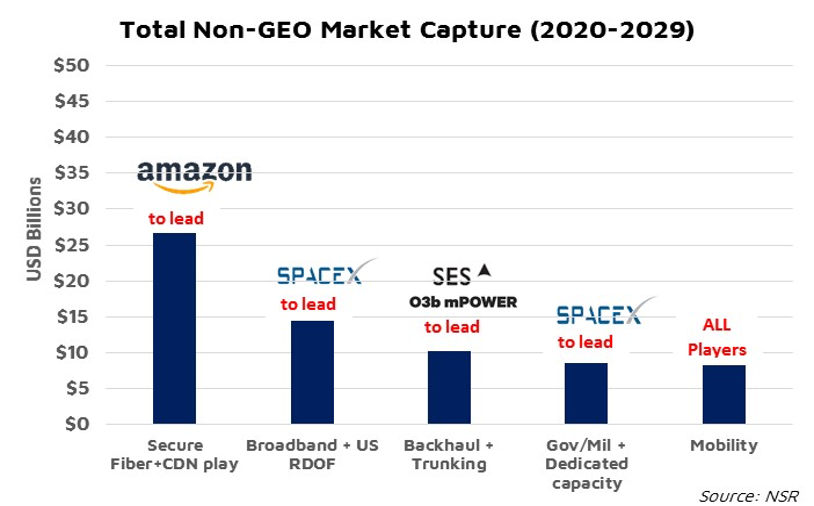 The biggest challenge is affordable user terminals, as without them – scale is impossible. That said, $30B is still a very high number, given the precedence of annual business ViaSat and Hughes have done over the last 5 years, who have a well-established commercial solution. Also, given the competition, the annual Non-GEO revenue pie is certainly going to be split amongst multiple players (OneWeb, O3b mPOWER, Amazon, Telesat). There are wild cards like Rural broadband subsidies (RDOF) by the FCC, or possible military payload leases that provide additional revenue. But $30 billion would be a 10x stretch even post combining all possible connectivity revenue channels in the near to medium term. Although, applications/revenues from services offered on top of connectivity revenues could rake in more revenue, similar to apps offered within Tesla. As manufacturing and throughput efficiencies improve, a 2nd Gen SpaceX constellation could post higher revenues from underserved areas.

Unless the manufacturing and launch processes are done at scale, the CAPEX $/Mbps/Mo is not competitive enough for small players to match LEO efficiency. Constellations inherently require large funding ($3B-$10B) and risk to build towards this scale, which only billionaires and massive corporations are capable of. But startups aren’t meant to play this conventional game and should look at developing the next breakthrough technology that helps improve the current cost/performance efficiency by 10x, or develop new sensors, or push ground segment cost for LEO down by 10x. There are glaring gaps both in hardware sensing and software automation, and this would be the right battleground for startups to innovate.

The industry is certainly witnessing a change in guard, with large players like SpaceX entering with thousands of satellites and with Amazon dedicating $10B to the development of its Kuiper constellation. Traditional players like Telesat are consolidating so as to raise capital for its LEO constellation, while SES has invested in a new fleet O3b mPOWER and post C-band proceeds will potentially look at M&A. Intelsat recently became vertically integrated in the IFC business with its Gogo acquisition, while large integrated players such as ViaSat and Hughes have demonstrated double-digit growth in the last 2-3 years. While this consolidation happens, the manufacturing and ground segment efficiencies improve and the wholesale pricing keeps dropping – hurting small operator economics even more. While VHTS (200-1,000 Gbps) look to sell capacity at $100-$150/Mbps/Mo price points in Backhaul and Broadband segments, LEOs are expected to match and go lower than this price, creating a glut of capacity post 2024. This is expected to fuel further consolidation as legacy fleets will be bought at a distressed price.

Non-GEOs have arrived, and the top 5 contenders SpaceX (Starlink), OneWeb, SES (O3b mPOWER), Amazon (Kuiper) and Telesat are certainly to launch their 1st Gen constellations. There is enough addressable market for all players to play, but not for all players to succeed. Check out who has a higher probability to “win” in NSR’s recent HTS Constellation: A Critical Assessment, 3rd Edition