The satcom market is rife with innovative ideas and constellations targeting backhaul, mobility, consumer broadband and government verticals. In response to this proliferation of business models, traditional satellite operators are getting involved in various capacities to tap into the demand landscape, which can be accessed through LEO or MEO fleets. These GEO-MEO-LEO tie-ups occur while operators are already undertaking aggressive GEO capacity expansion plans, leading to highly complex and speculative business models, and uncertain impact on company financials.  Given this, it’s important to review the latent demand verticals, cost and CAPEX scenarios for the Big 5 (Intelsat, SES, Eutelsat, Telesat, and JSAT, accounting for 60% of global satcom revenue) and finally the impact of supply and competition on the winning strategy.

To summarize the current play for Big 5:

Assessing CAPEX intensive LEO plans with respect to the existing risk appetite, and with a nominal lifecycle cost of $2.5B to $3.5B for a constellation, it is understood that significant uptake of CAPEX would be needed to deploy the complete system. It is assumed that all each of the three constellations (O3B, Telesat LEO and LeoSat) may cost approx. between $2.5B and $3.5B. 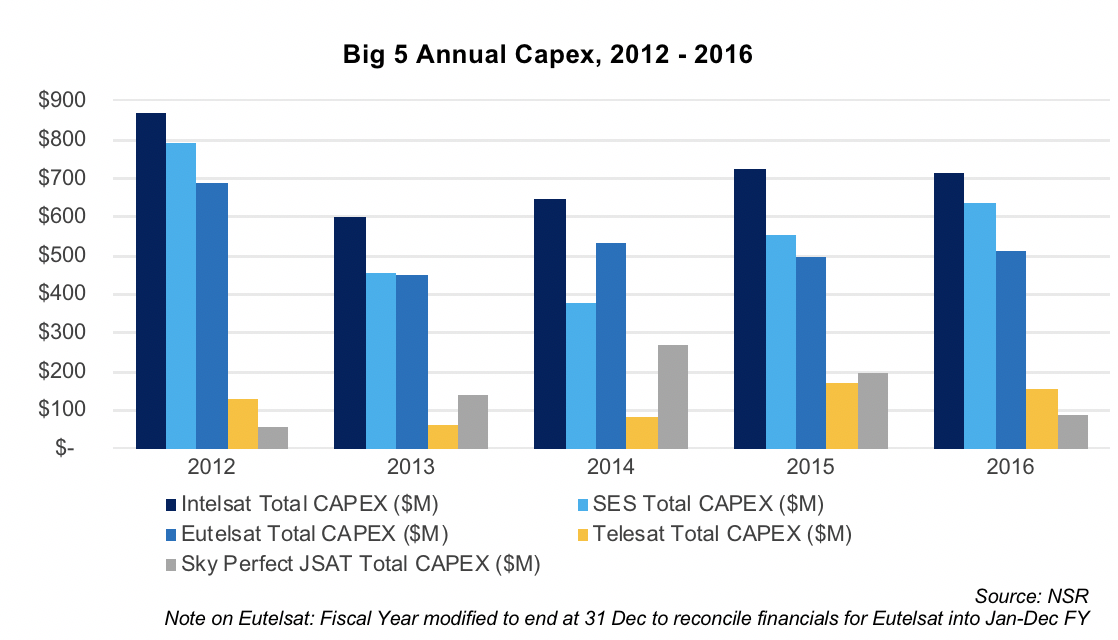 Spreading a conservative cost of $2.5B over 5 years gives a $500M CAPEX projection for each year. Now, given that LEO fleets essentially target data/mobility/government type of applications, non-video CAPEX can be considered for appropriate correspondence. Assuming CAPEX linearly varies with revenues and that non-video revenues generally account for 70% for most global operators, non-video CAPEX would theoretically be 30% of the total CAPEX. Consequently, it is derived that each operator spends considerably less on von-video CAPEX than the required CAPEX ($500M annually) for building a LEO fleet. Thus, even with a cut in CAPEX up to 20% using organic measures, an operator would find it difficult to absorb/raise an extra $500M of CAPEX per year (almost tripling the spend for SES/Eutelsat, and 10 times for Telesat), unless there is specific latent vertical demand that can’t be tapped through existing (GEO) HTS fleet investments. 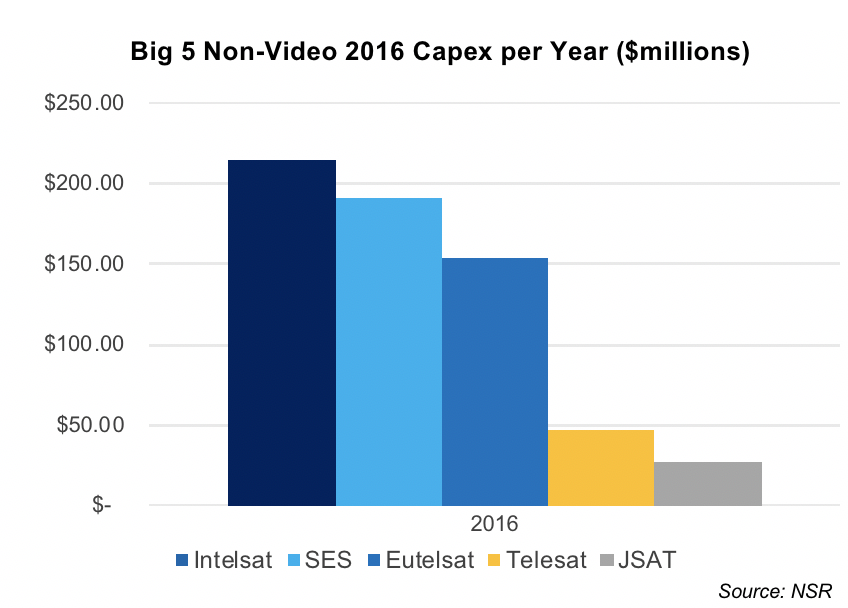 But What About Supply?

Analysing the supply landscape, currently less than 40% of global GEO-HTS capacity is currently in use, with demand lagging. This will continue to be the case with current and upcoming launches of HTS payloads such as SES-12/14/15, EpicNG fleet, Telstar 18/19 Vantage, Ka-Sat and Eutelsat 172B, ViaSat and Hughes satellites along with regional HTS capacities over Latin America and Asia regions. Most of these HTS satellites target aero and maritime, cellular backhaul, mobility and government markets; e.g. similar to the LEO systems—and differentiation becomes increasingly hard for multiple upcoming LEO fleets, with corresponding ground systems still in question.

Thus, it becomes a question of whether anticipated demand would materialize within the payback period, and if not, what could be the impact on the finances of each operator. Analysing the CAPEX to revenues ratios as provided in NSR’s Satellite Operator Financial Analysis, 7th Edition, with an increase in CAPEX of $500M, revenues would need to increase by as much as 40% to 85% for the Big 5 operators for an assumed constant CAPEX to revenues ratio, as shown in the table below. SES, with a $750M incremental revenue forecast till 2021, is below the 40%-85% bar with 33% increase in revenues (as of 2016), by having executed a largely cash-based deal to nullify debt towards long term CAPEX (~$1.5-$2 billion), maintaining the Net Debt to EBITDA ratio below 3 to maintain its investment grade rating. Thus, it remains to be seen whether a cash-strapped Telesat with EBITDA of ~$570M can achieve the same CAPEX to revenues ratio to maintain a healthy turnover ratio (~0.15-0.18) with a Net Debt to EBITDA ratio below 4, given the yearly CAPEX investment is almost 10 times higher compared to the non-video CAPEX.

Intelsat and JSAT, with strategic partnerships, have a very limited play in this arena, low upside, but are essentially risk free and on an organic pattern to their growth, while simultaneously developing a service provider based distribution business that can rival the other three big operators. Eutelsat, as well, banks on a similar strategy with limited upside and organic growth through vertical strategic partnerships with service providers for its GEO-HTS and FSS fleet. For the first time, the industry sees a regional operator in Telesat going aggressive with LEO plans with a launch timeframe competitive to OneWeb and more than 50% increase in revenues in the medium to long term, although with a low ability compared to Top 3 with respect to EBITDA, and a risk of high exposure – in case revenues don’t materialize in the payback period. SES bet early with an investment of $75M in O3B and, with the recent acquisition (and low CAPEX compared to LEO fleet), has materialized MEO-GEO synergies into one of the more promising growth areas in the near term.

Questions remain though, that had the Softbank led Intelsat-OneWeb merger not failed, and with cash infusion of $500-600M per year towards CAPEX for OneWeb, and an improved debt profile for Intelsat, would that have been a turning point in the Big 5 play?  Could Intelsat with OneWeb have mustered growth (for a similar CAPEX to revenues ratio) through a well-built distribution network from the partners associated, pushing other operators out of the game? Ultimately Intelsat and OneWeb playing fragmented roles in the industry may be a win for other global operators to further their LEO/MEO ambitions.