The “Total loss” of a satellite like Intelsat 29e, just 3 years into its 15-year life, has 2 significant implications: the sunk cost of the satellite, in addition to over 12 years of potential revenues and 6,552 kg of uncooperative debris roaming uncontrolled in geostationary orbit. As organizations such as Northrop Grumman and Effective Space work towards making In-Orbit Servicing a reality, incidents like Intelsat 29e demonstrate the need and opportunity for this market. The initial In-Orbit Demonstration (IOD) missions, while focused on life extension, are also a gateway to various other In-Orbit Servicing applications with differing levels of complexity that could curtail losses from similar mishaps in the future.

NSR’s In Orbit Servicing Markets, 2nd Edition report forecasts 17% of cumulative revenues over the next decade will be attributed to salvage opportunities such as the one that could potentially save IS-29e. 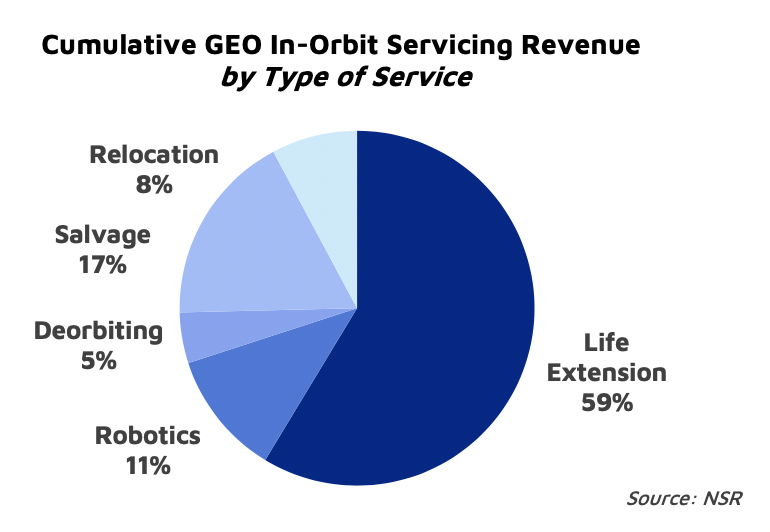 Salvage is a highly opportunistic market with different mission possibilities, and therefore the biggest challenge is to have immediate availability of a servicer. Based on the mission profile, it can be a challenging business case for both the satellite operator as well as the IOS provider due to factors such as high delta-V requirements, extremely long idle time and lack of enough useful life to justify needing the service. This makes both – the addressable market as well as the supply for these missions – highly restricted. However, the potential benefits also raise the pricing tolerances and allows the service to be offered at premium prices.

Due to its large size, tracking Intelsat 29e is relatively easy with the existing technology, which can provide timely and accurate alerts to help avoid collisions with other satellites. However, there is still a significant risk of a potential collision with other uncontrolled debris in orbit – which will result in further, smaller and potentially more harmful debris.

The RemoveDebris mission, led by Surrey Space Center, recently successfully demonstrated in-orbit active debris removal. Other organizations such as D-Orbit and Astroscale are similarly working towards debris mitigation and removal applications. The complexity arises, however, when dealing with uncontrolled and uncooperative debris, which Intelsat 29e now is. Currently, no existing technology is capable of capturing and safely de-orbiting this object profile. As such, NSR believes this to be a mid- to long-term application of In-Orbit Servicing.

Another rather long term but highly relevant application of In-Orbit Servicing is the ability to salvage parts from a defunct satellite such as Intelsat 29e. Any useable and valuable components from an otherwise non-operational satellite could be recycled, thereby making up for losses, to certain extent. The supply pool of salvageable components is in fact not just limited to failed satellites but all satellites that are either retired or nearing end of life.

While the complexity of this application requires high technology readiness levels in robotics and AI, in addition to the relatively simpler rendezvous and docking operations, the potential benefits are an increase in the return on investment for operators, which in today’s uncertain GEO market dynamics, is a significant advantage.

With compelling opportunities, the In-Orbit Servicing market also raises some critical questions regarding regulations, legality and liability, which must be resolved before any of these applications can be widely commercialized.

While attempts have been made for decades, In-Orbit Servicing is still a nascent market with early missions planned in the very near future. Life extension, while forecasted to be the largest market, is only just an opening to more complex missions with even higher return on investment.

In an environment of falling capacity prices and significant CAPEX, the In-Orbit Servicing market has the potential to change space economics. From life extension, de-orbiting, and salvage operations that lead early revenue opportunities, to satellite repair and alteration on the mid-term roadmap and diverse emerging applications support in the long-term, In-Orbit Servicing not only promises to lower costs but also open doors to new revenue streams.