Home > The Bottom Line > Scratching Our Heads over IoT-Dedicated Smallsats

Scratching Our Heads over IoT-Dedicated Smallsats

As NSR examines in its M2M and IoT via Satellite, 8th Edition study, much of this market is currently addressed by GEO players such as Inmarsat, and established Non-GEO players such as Iridium and Globalstar. The past several years have seen significant interest and investment in smallsat business models to address the M2M market, with much being made of the promise of the aforementioned tens of billions of M2M/IoT devices coming into service. Despite this, however, NSR does not see new smallsat operators as being in a strong position to address this market, and moving forward, the challenges to gain market share from existing services will be formidable.

Several smallsat companies, including Kepler Communications, ELSE, Helios Wire and eightyLEO amongst many, many others, have built business plans to address M2M/IoT under the logic of tens of billions of IoT devices coming into service, thus capturing even 1% (top-down logic) of that will lead to tens or hundreds of millions of in-service units. These companies state that millions of satellite M2M and IoT devices will be required over the coming years; however, they fail to mention that many of these will require low latency, or high SLAs offered by existing MSS satellite operators.

Capitalizing on the lower cost of smallsats, nascent business plans have been built upon the presumption that they will be able to capture a piece of the growing M2M/IoT via satellite market for applications that are not latency sensitive, and that are trying to obtain the lowest possible cost per Kbps. This is much easier said than done, however, and for a number of reasons, NSR sees the established players as being at a sizable advantage in this satellite M2M/IoT market.

Traditional satellite operators that address M2M verticals include Inmarsat, Iridium, Thuraya, Globalstar, and others. The incumbent advantage in M2M/IoT is significant, and moving forward, it is expected that established operators will be able to capture the lion’s share of growth in this market, for several reasons.

First, it should be noted that the vast majority of M2M/IoT devices will be addressed via terrestrial means. Therefore, M2M/IoT devices that do go to satellite will only do so either because there is no terrestrial network in their area (becoming less likely due to expansion of terrestrial networks), requirements for highly critical applications that demand high up-time, or for a simplified single global platform. This will make it difficult for upstart smallsat companies to gain traction.  In order to finance expansion of constellations, these smallsat operators will need paying customers, but at least initially, it will be very hard to acquire paying customers, because smallsat constellations will have high(er) latency and comparatively low reliability in early stages, due to the lack of a full constellation. Only after having a full constellation in place will upstart companies be able to offer the reliability needed to address many of these verticals.

Beyond this, most M2M in-service units have a receiver installed and are put into the field for the entirety of their lifetime. That is to say, the switching costs for M2M are oftentimes too high to justify switching—the new upstarts will only be able to obtain market share by growing the market. When looking at areas for market growth, NSR sees existing satellite players and terrestrial operators as being more adept at addressing these markets.

With that said, there are niche opportunities that IoT dedicated small satellite constellations, namely M2M demands in areas without terrestrial coverage, such as agriculture and mining, and meter reading applications in rural and remote areas, which demand exceedingly low power requirements. However, the size of these markets will not be sufficient to dedicate entire constellations to such use cases. Whilst the CAPEX of small and nanosats are significantly lower, translating to lower price points and potentially more competitive offerings and services, key IoT smallsat verticals such as agriculture have comparatively low revenue potential, which presents challenges on its value proposition and their viability going forward. 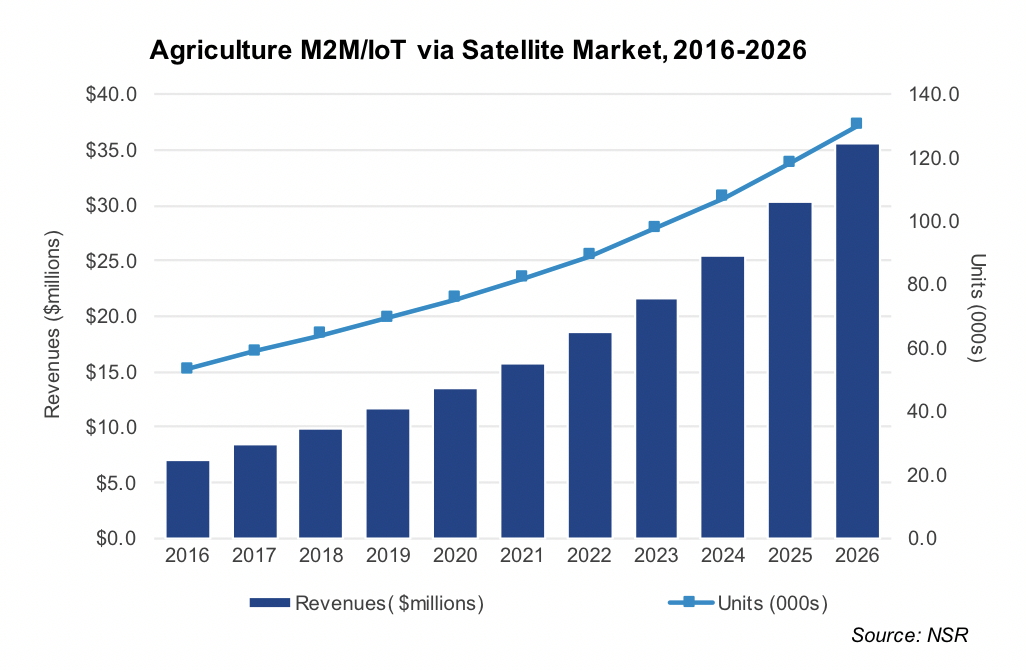 Despite the hype around the volume opportunity for M2M subscribers, these smallsat constellations may find themselves in a similar position to that of O3b a handful of years ago. O3b has found a great deal of success addressing verticals such as trunking, backhaul, and maritime mobility, but as the company’s name directly states, the initial intention was to provide Internet access to the other three billion—that is, the three billion people (more or less) in the world who are unconnected. Despite the nobility of these intentions, O3b quickly found out that it’s a very hard business case to sell Internet access to people who’s ARPUs would be, at best, single-digit dollars per month. The smallsat constellations may similarly find that the ARPUs involved in these verticals do not justify the investment (further depressed by the large numbers of smallsats to enter the market), and that they need to find their own highly lucrative version of O3b’s U.S. DoD, Carnival Cruise Lines or Royal Caribbean.