M2M and IoT have been available for decades across MSS and VSAT satellite offerings, which focused mostly on enterprise and government/military use cases, offering high reliability in exchange for higher pricing. Given the lack of alternatives and the significant value that is provided, end users have been willing to pay high prices for these services. With small satellite operators continuing to receive new rounds of funding, and small satellite launches continuing, what impact will this have on existing satellite M2M/IoT market and operators? 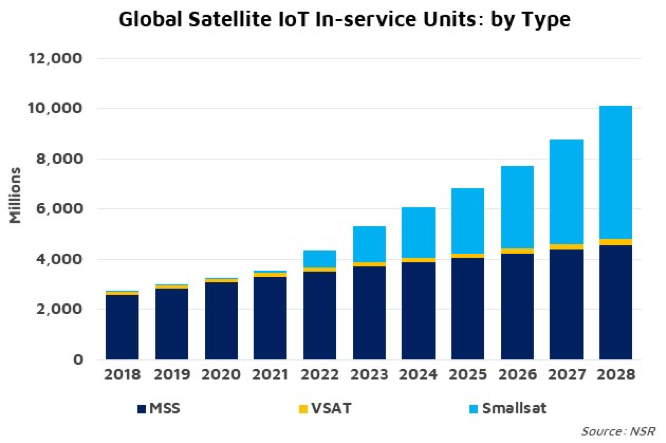 According to NSR’s recently released M2M and IoT via Satellite, 10th Edition, NSR forecasts growth to over 10 million in-service units in 2028, up from ~2.7 million in 2018. Of these, 53% will be attributed to smallsat type IoT terminals, up from near 0% in 2018. While the rapid growth will quite substantially alter the dynamics of the satcom M2M/IoT market, MSS operators will continue to exhibit strong growth with regard to IoT; however, the value proposition and strategies that these operators have will change somewhat over time to adapt to a new satcom environment – one which is quite different to today.

The key strategy for smallsat constellations differs to existing solutions – smallsats will target devices that will be connected for the first time, where there is real pressing need and where the economics have not previously stacked up, or there were issues integrating existing form factors. This is driven by the significantly lower CAPEX to launch these constellations – with NSR estimating for instance Astrocast’s total cost to be $50 million, Fleet Space $44 million, and Hiber $22 million (excluding satellite replenishment). This compares to Iridium’s ~$3 billion investment in NEXT.

Because of the much lower CAPEX, it will be challenging for MSS operators to compete on price alone. Smallsat operators are able to offer substantially lower ARPUs than the rest of the market today. For instance, Myriota offers pricing varying from 1 to 2 cents per message no matter what application is used, which promotes large scale usage, and thus equipment sales and corresponding equipment revenue. Fleet Space offers pricing of $2 per month per device, compared to today’s satcom overall M2M ARPU of $22.78 per month.

How Will MSS Operators Fare?

With this kind of competition, existing solutions will still continue to grow, albeit at a slightly lower growth rate longer term than what we have seen in the past few years as some customers, especially for where latency isn’t important, are expected to subscribe to smallsat solutions over MSS.

MSS operators thus aren’t standing still and will be diversifying their offerings over the coming years. Iridium’s Certus 20 terminals are being developed, offering higher 22 kbps bandwidth, with availability expected in 2020. Inmarsat’s existing BGAN M2M service is also well placed for this future given the higher bandwidth availability. Orbcomm is already well diversified with significant usage driven by their terrestrial network operator partners (despite the loss of Maersk contract through AT&T), vertically integrated offerings through a string of acquisitions over the years, as well as access to Inmarsat’s IsatData Pro (IDP) services.

Globalstar, on the other hand, is most susceptible to the growth of smallsats given the nature and price of the simplex product range ($3.16 monthly ARPU) – combined with off-again-on-again usage. Further, the intention of smallsat operators to target panic button type solutions could hurt Iridium’s InReach and Globalstar’s SPOT product lines longer term. While the InReach is responsible for strong growth for Iridium, 47 % of revenues for Globalstar come from SPOT – a very concentrated revenue source that could spell trouble should SPOT revenues become cannibalised by new smallsat products.

However, Globalstar is planning to broaden its revenue base, with the company having access to terrestrial spectrum. In December last year, 3GPP designated their terrestrial S-band spectrum as Band 53, permitting LTE services in the United States and integration into cellular equipment and infrastructure, including dual-mode services. A 5G NR designation is expected later in 2019 or 2020 – this will enable eMTC and NB-IoT, two protocols designed for high device density and low power and thus well suited to IoT. Further announcements for jurisdictions outside the United States are expected – all of which will be a significant boost to Globalstar’s future M2M and IoT revenue base.

Given these changes, should operators invest in new smallsat constellations? Smallsat operators have been found continually going to MSS operators to ask for investments and partnerships, but so far there have been limited detailed partnerships. Some MoUs have been announced a while back (such as Iridium with Hiber, and Thuraya with Astrocast), however given the large field of smallsat operators intending to enter the market, any investment will be a high risk strategy given it is not known yet which ones will achieve critical mass and become profitable. It is thus difficult to recommend an investment strategy at this point for all but those can accept such a high risk.

MSS operators shouldn’t be afraid of new competition in the form of smallsats. Growth will continue to be strong for MSS, and in 2028 will contribute 62% of overall M2M and IoT satcom revenues. However, operators must be careful to not cannibalize existing markets by offering smallsat level ARPUs and bringing down the rest of the service revenue base.

Rather, MSS operators should move to target ’premium’ new applications, like monitoring fuel levels at hospitals or private buildings – by promoting highly reliable, high SLA offerings combined with highly functional software developed though partners – applications that will be more difficult for smallsat operators to target. Strategies to target higher bandwidth, dual-mode and backhaul type solutions will also grow the MSS market, which put together means that despite a changing M2M and IoT environment, MSS IoT operators will continue to thrive longer term as long as they adapt to this changing landscape.