December 9, 2019 by Shagun Sachdeva | More from this Analyst | Profile

Stephen Jay Gould’s concept of punctuated equilibrium – a theory in evolution, suggests a long period of stasis is punctuated by more rapid and defining change that disrupts the equilibrium. When applied to the satellite industry, the introduction of small satellites can unquestionably be considered a burst of a defining change. In an otherwise slow and relatively constrained industry, small satellites bring about a disruption, lowering the barriers to entry and enabling new revenue streams and opportunities. Carrying out the theory of evolution further, however, the rapid disruptions are followed by mass extinction and then a state of equilibrium. So, what does that mean for the small satellite market and the satellite industry overall?

Gradual evolution of the industry will continue, now with smallsats as a significant part of it, with advancement in electric propulsion extending the usage of small satellites in GEO and beyond. NSR’s Small Satellite Markets, 6th Edition report forecasts over 8,135 small satellites to launch between 2018 to 2028, across all regions. 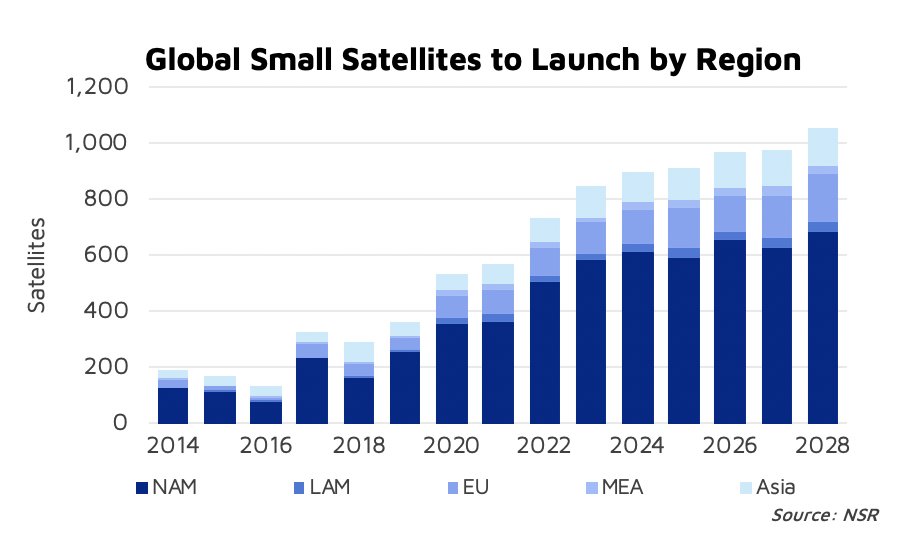 As the industry starts to settle into the next stasis and capitalize on the ripple effects of this disruption, with new emerging applications like Space Situational Awareness and in-space transportation systems, ‘mass extinction’ is imperative for the industry to thrive overall. In the case of smallsat markets, that means exits, M&As and consolidations. This phase of transformation is now evident in some of the prime elements of the value chain: operators, manufacturers and launch service providers.

Only 18% of Constellations Highly Likely to Launch

A significant part of small satellite market is dominated by constellations. There are over 120 smallsat constellations currently planned across Communications, Earth Observation, and Situational Awareness applications. NSR evaluates all announced constellations and presents the likelihood of launch for each. Based on their financial status, strategy and competition, manufacturing and launch delays and BIU and ITU milestones, NSR estimates that only 18% of all planned constellations are highly likely to succeed to the launch stage.

Recent Exits/ M&As/ Consolidations: EchoStar’s acquisition of Helios Wire, LeoSat’s exit (while not technically a small satellite system by NSR’s definition) is another example of the phase the industry is now in.

In-house Manufacturing Limiting the Size of the Revenue Pie

One of the most favourable characteristics of smallsats is the simplicity of their design and ease of manufacturability. As a result, a large number of players are able (and prefer) to manufacture their systems in-house, thereby lowering the overall addressable market for traditional manufacturers. 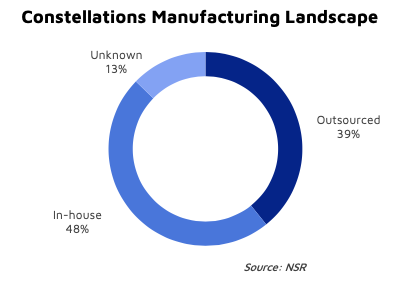 The growing competition and a limited revenue pie are pushing the manufacturers to increase the capability-to-price ratio further. Mass production, COTS and more efficient production processes are just some of the practices the manufacturers have adopted to lower their costs to offer competitive prices – but how much lower can they go and is there room for all the manufacturers?

Has SpaceX Set the Bar Too High?

Among various other new applications and business models, smallsats also triggered the concepts of rideshare missions, dedicated smallsat launchers and more recently, dedicated rideshare programs. Across all categories, NSR tracks over 130 launchers currently in development. While these different models are expected to offer more flexibility and reduce the launch bottlenecks, the pricing competition, reliability of service and launch cadence will be the leading determinants for the survival of the launch service providers. SpaceX, with its new dedicated rideshare program has raised the bar quite high in pricing, reliability and their ever-increasing launch cadence. Can the new players compete? And how will the traditional players maintain their competitive edge?

As with the concept of punctuated equilibrium, the advent of small satellites has had a critical impact on the evolution of the satellite industry. The relative simplicity of smallsats, and the associated low-cost architecture are enabling easier access to space. By lowering the barriers to entry, this market not only impacts the commercial industry, but it’s becoming a critical element of STEM education. However, from a phase of equilibrium to disruption by small satellites, the industry is now in the midst of what is called the ‘mass extinction’ in the theory of evolution. How many manufacturers, launchers and operators will be strong enough to survive this phase of the industrial evolution?