The software defined satellite (SDS) market has been buzzing with news starting with the launch of Eutelsat 10B, upcoming launch of SES’ mPower satellites, and new orders from Eutelsat, Intelsat, and SES. The need for SDS is driven by a variety of factors: demand for satellite-based connectivity, development and availability of new technologies, and support for a wide range of missions and applications. However, new technologies typically bring higher risk & cost, and each decision made for new satellites & networks can compound the entire value chain. With that in mind, given growing demand, varying approaches to space, and challenging bottom lines, the question becomes, “Who will win in the new satcom era?”

NSRs recently released, Software Defined Satellite, 2nd Edition report values the market at over $97.2B for communication satellites over the next decade, for satellites with fully or partially flexible architecture. NSR expects this to be generated from demand for over 27,000 satellites with flexible architectures to be manufactured and launched between 2021-2031. Operators are entering a new era where struggles to serve high-density areas, dramatically shifting regional demand and capital expenditure cycles leads many to consider software-defined satellites. Indeed, beam steering, power/spectrum reconfiguration post-launch, and digital channelizers are enablers to face the dynamics of the market of the next decade. However, there remains hesitations to full-scale adoption of SDS due to various factors that operators have to consider: CAPEX, technology risk, reliability, and alternative solutions such as small-GEOs. Let’s ponder what is the best suited approach in order to win ahead.

Improved reliability with integration of tested and tried subsystems is lessening risk of mission failure and with AI/ML for autonomous operations of satellites, more tools are available to operators as they seek ways to ‘beat’ the upcoming changes in the market.

However, there remains hesitation in the full-scale adoption of SDS due to cost driven by integration and deployment of innovative and high-risk technology. Furthermore, time to orbit presents a challenge as satellite manufacturers are impacted like everyone else in the industry by supply chain problems. Such was the case for Indonesia’s replacement of Nusantara-2 satellite; operators chose Bent Pipe because it enabled a faster time to orbit. With the introduction of small-GEOs to the market, the impact of size of the satellite challenges the established market, as a niche play is developing with some of the SDS unique features but at a lower CAPEX and smaller package to launch. 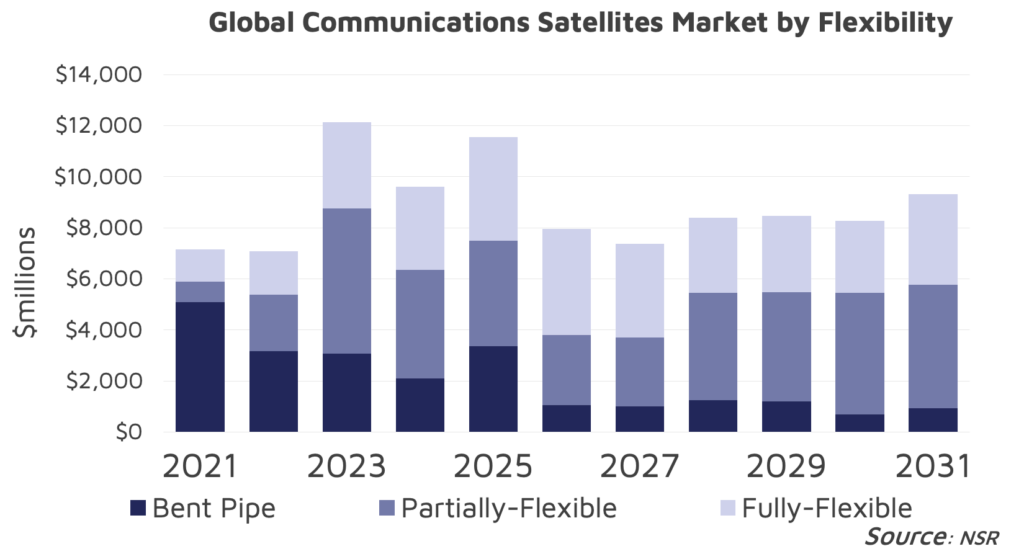 Satellite operators are focused on improving their value propositions as the customer demands for reduced latency, increased capacity, and flexibility grows. With existing fleet approaching end-of-life (EOL), there is a continuous evaluation (and evolution) of opportunities and challenges that satellite communications operators must make, and the decision matrix is becoming more complex. Solutions available impact different factors such as lifetime, application diversity, order to orbit timeframe and costs.

Whether it is the rise of in-orbit servicing product/services, and multi-orbit constellations (LEO, MEO, GEO), new factors surrounding the adoption of SDS are becoming increasingly difficult to evaluate as the technology advances. However, there is a clear trend to address the demand for more capacity with powerful, capable, and, in most cases, flexible spacecraft. A number of options are available on the market, but deciding which features are the best is still blurry.

Even though SDS is becoming a popular choice, there are some clear challenges which need to be addressed even if early adopters are helping kick-start the market. 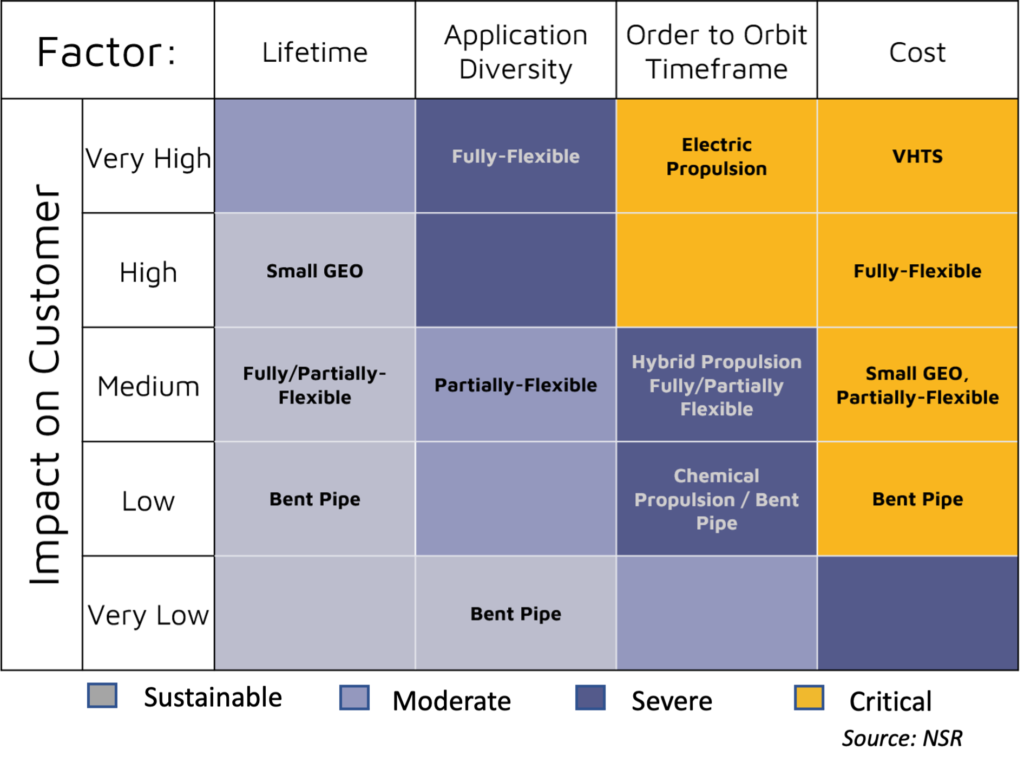 There are trade-offs to aid in decision making, and satellite manufacturers are trending towards defining key value propositions (as per the table above) with different impacts depending on choice. These factors and their weight on the market & operators helps outline whether SDS satellites present a viable case for investment to address customer demand that could eventually change substantially, not just in terms of subscribers but also capacity and price of service.

Amongst these factors, there are three that still hinder full-scale adoption of SDS: cost, time to orbit, and size of satellite. With the smaller-GEO satellites, time to build traditional larger GEO satellite is now being challenged. For satellite operators with a core market focus, having access to a smaller, agile, application-dedicated satellite where the operator can address a specific market segment (e.g., IFC or maritime or regional demand), and with minimal deployment time makes for a more bottom-line friendly decision.

However, size of satellite presents a key challenge. Smaller satellites often have shorter lifetimes, owing to less power, fuel, or other onboard capabilities. While smaller satellites may be cheaper, at least to launch, they also present a problem for operators, who now have to choose when to defer costs. For example, a small GEO may be cheaper to launch now, but may require replacement sooner than a larger GEO satellite.

Another factor, time to orbit has become critical as the number of satellites approaching EOL increases, and operators are faced with a shorter timeframe to decide. For operators where GEO satellites are part of the critical national infrastructure and/or associated with national security (Gov/Mil Agencies), having a secure, reliable, flexible satellite is taking precedence. Satellite manufacturers are addressing this by improving manufacturing security, better interoperability, and adding some basic hardware standardization into the product lines.

With cost being one of the key factors impacting adoption, satellite operators with the ability to defer CAPEX to a later point in the future seek reliability, flexibility, and autonomy to be proven by satellite platforms already in operation. This has also opened another window of opportunity for satellite manufacturers, to further add to their business lines by working in-cooperation with governments to develop multi-application hardware-standardized platforms, which can be utilized by a variety of satellite operators.

Security, and sophisticated architectures are being addressed using artificial intelligence (AI) and machine learning (ML), the development of more sophisticated software architectures, and the emergence of new software development tools. AI and ML are becoming increasingly important in the development of SDSs. And, to address these security concerns, satellite manufactures have adopted several measures. For example, they have implemented encryption protocols to protect data transmitted to and from the satellite. They have also developed automated systems to monitor the satellite’s environment and detect any potential threats. In addition, there has been an increase in the adoption of automation technologies to improve the efficiency of SDS operations. Overall, the steadiness is increasing market adoption rate for SDS.

Satellite operators find themselves in an increasingly-competitive space, with new technologies, approaches, and customer demand coming to market. These disruptions provide opportunity, but meeting the market requires critical decision-making, with factors such as time to orbit, size of satellite, and most importantly, cost muddying the waters. However, despite the familiarity of traditional satellites, and the competition from small GEOs, flexibility is in ever-increasing demand. Software-flexible satellites have much to prove in terms of cost and reliability, but given their flexible-by-design nature, they are quickly becoming the new normal, and will be the winners of GEO & LEO satcom.