As challenging as 2020 was, one part of our industry  progressed and grabbed the media limelight, even into the early part of 2021: space tourism. Several tests, funding rounds and SpaceX’s commercial launch of a NASA crew kept the dream of space tourism alive. Through hardships and long development time, demand for space tourism remains as high, if not higher than before, and as new test flights are announced, we ask ourselves: “Is the market truly ready for lift off?”

According to NSR’s Space Travel and Tourism, 2nd Edition report, more than 20 players are involved in making space tourism a reality with SpaceX, Virgin Galactic, and Blue Origin leading the charge. NSR forecasts the revenue opportunity for this market will be $7.9 B for the 2020-2030 period. With significant testing and despite constraints such as regulatory hurdles, the demand for space tourism market increases, and the market takes on a spark of glamour with Hollywood studios now in the mix as paying customers.

SpaceX and Blue Origin are likely to be the prominent players in orbital tourism with end-to-end capabilities, i.e., both launchers and crew capsule to carry commercial astronauts. SpaceX successfully flew two government missions to the ISS last year and with this achievement, the demand from and capabilities to cater to the private sector is set increased in the coming years. NSR forecasts the pricing, currently averaging around $51 Million, to reduce considerably in the next ten years, but still limit the opportunity to very high-net worth individuals. Another critical player for orbital tourism will be the brokerage companies like Axiom Space and Space Adventures, with the former promoting an ambitious and hugely complex projects: its own commercial space station to be launched around 2025. 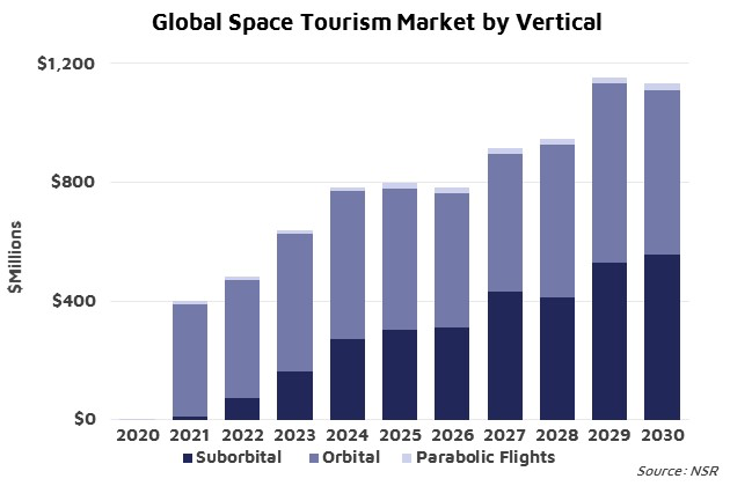 Virgin Galactic, the prominent player in the suborbital tourism market, has been developing its rocket-plane for over a decade, raised more than $500 million in investment through advanced ticket sales, and became public last year. It is expected to carry passengers this year and has a fairly clear runway to do so. Contenders such as PD Aerospace and i-Space aim to be in the competition but will face the same technological development challenges and are years from lift-off. Balloon-based space tourism is also in development, with a lower-priced ticket. However, some legal challenges could prevent players from reaching maiden flight, and growth is likely to be slower than other means to get above the Earth’s atmosphere.

The lesser-known reduced gravity parabolic flights are currently the most viable opportunity part of the market, as over 100 flights took place in 2019. Developed for astronaut training, parabolic flight tickets cost around $5,000 per person and cater not just to the general public who want an ‘astronaut-like’ experience, but also scientists, advertising agencies, and the media. While it has a head start and a price advantage, only 2% of the total space tourism and travel market revenue is expected to come from parabolic flights in the next ten years.  In comparison, 49% of revenues are forecast to come from both suborbital tourism and orbital flights. It is often the prestige and excitement associated with it, the pre-booked tickets showing high demand, and the fact that parabolic flight demand has grown relatively slowly over the last decade that underpin this picture. 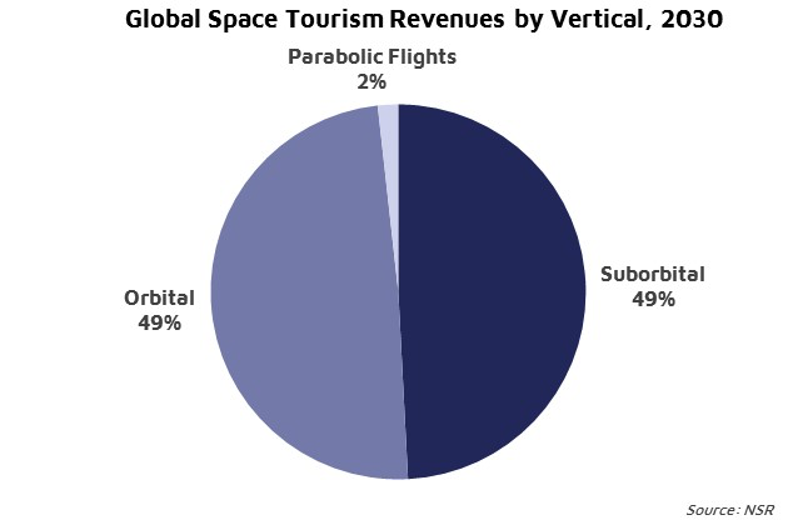 Demand for space tourism continues even if supply lags, but significant investment and spillover from government-supported missions have helped improve the timeline in hard times. The suborbital market will lead passengers served and revenues with fewer technological barriers left to overcome, coupled with longstanding very high demand. The rather quick maturity of orbital tourism has surprised many, but it still remains a niche market, helped by brokers and launch service providers favoring the market expansion. And new partnerships could help parabolic flights gain a sliver of the limelight and by rebound, build more support for other types of space tourism.

Space tourism and travel market still face technological, funding and go-to-market challenges, but as demand continues and progress is made even in very difficult circumstances, liftoff is certainly on the horizon.