September 22, 2020 by Carlos Placido | More from this Analyst | Profile

The Starlink constellation is currently made up of over 650 communication satellites orbiting Earth at an altitude of 550 kilometers. By satellite count, such partial deployment already makes SpaceX the world’s largest satellite operator of FSS frequency bands suitable for high-throughput connectivity.

As more Starlink and OneWeb satellites are manufactured, deployed and other satellite operators including Amazon Kuiper and Telesat LEO enter the picture, emerging Non-GEO systems joining O3B in the race to “connect the world with low latency” become an irreversible and expanding reality.  However, keeping up with Non-GEO developments in an increasingly dynamic business can become a daunting task when satellite operators regularly reassess their game plans and submit modification requests to the FCC and other regulators. Thus, in the context of multiple LEO and MEO initiatives with moving parts, it becomes vital to count with flexible ways to quickly visualize constellation deployment progress and assess the future impact of planned modifications. 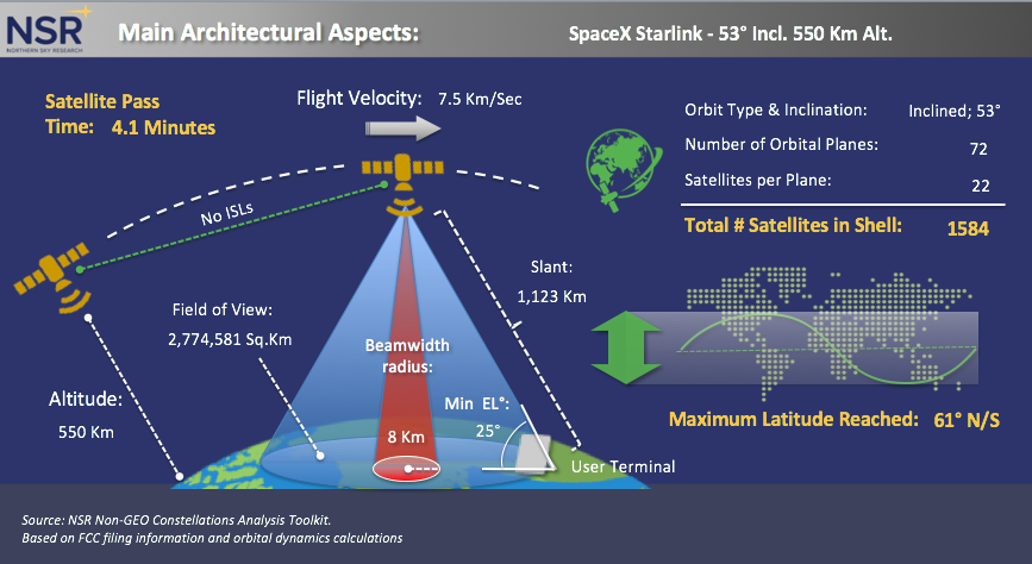 NSR’s Non-GEO Constellations Analysis Toolkit allows users to make sense of new data inputs and quantify possible future implications. Let us take the example of recent information made public by SpaceX in an update letter and presentation about Starlink submitted to the FCC.  By extracting information from this SpaceX presentation, the NSR toolkit can support users to make sense of data and answer key questions such as:

Link to the SpaceX letter and presentation to the FCC, dated September 4, 2020.

The Starlink system currently has over 650 satellites orbiting at an altitude of 550 kilometers with an inclination of 53 degrees. Since the first constellation shell is incomplete, continuous Internet service is only available within a very specific latitude range, which is known to be between 44 and 52 degrees latitude. 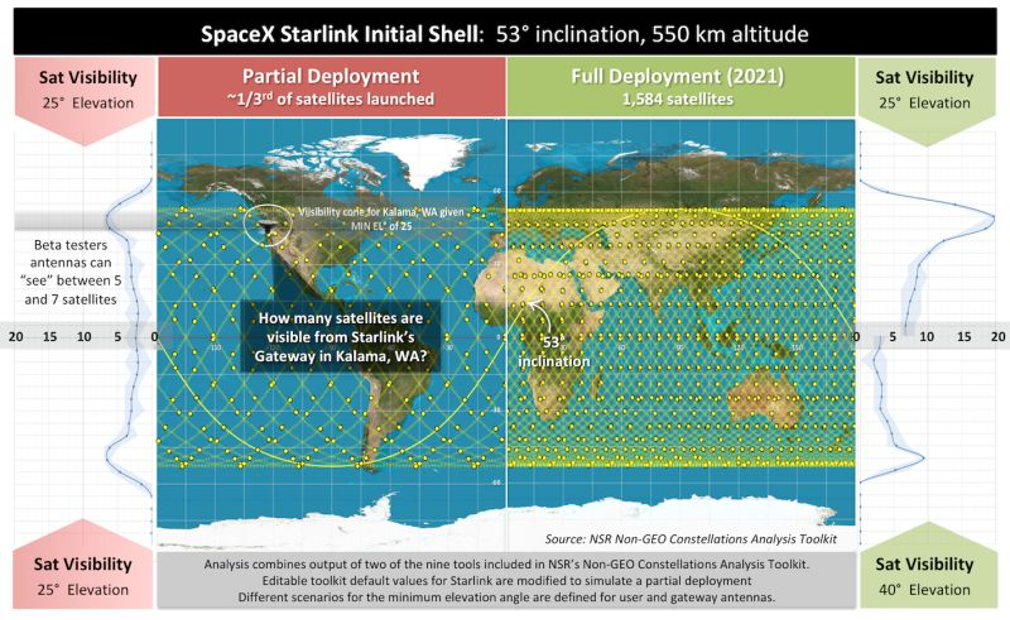 The image above shows partial and full deployment (2021) scenarios for Starlink’s first constellation shell. The image is the result of conducting the following analysis using two tools included in the NSR toolkit.

Assuming an operational fleet of 528 satellites (one third of shell-1 system) evenly distributed across 24 orbital planes, one can infer why Internet service is available only between 44 and 52 degrees north latitude. The reasons appear to be:

Starlink gateway stations and user terminals communicate only with those SpaceX satellites that are visible on the horizon above a minimum elevation angle, which SpaceX defined as 25 degrees initially. As network continues being deployed, more satellites become visible, so such minimum elevation could increase to 40 degrees, as originally planned for the full deployment scenario. However, note in the chart that Starlink may still benefit from allowing lower angles in Equatorial regions to increase the number of visible satellites and to avoid interference with Ku-band GEO satellites and with OneWeb, which also uses Ku band for user beams. 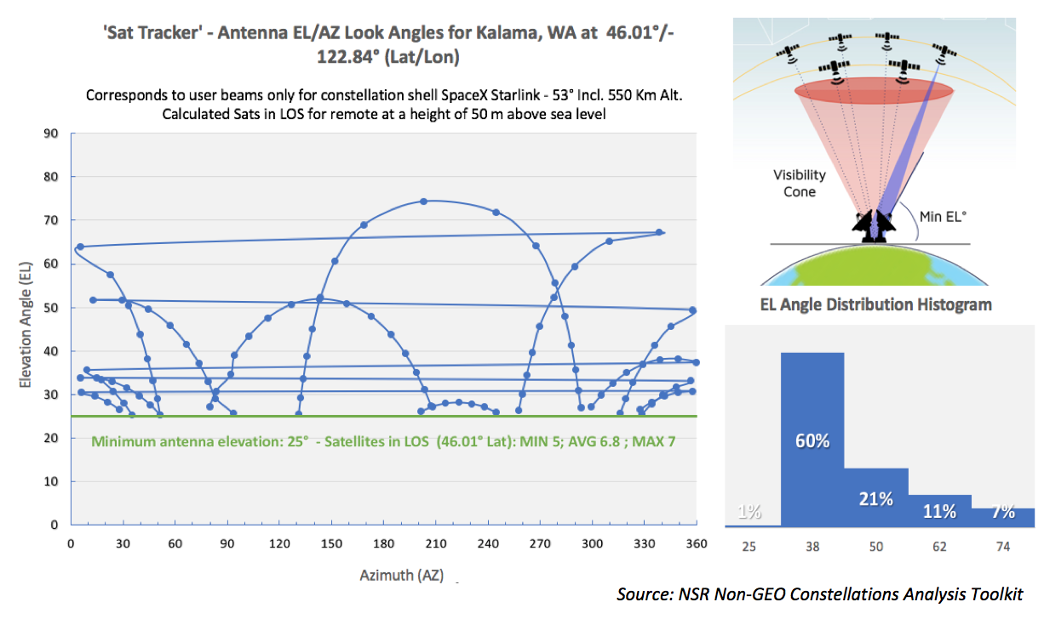 As an example of how many satellites are visible at a specific location, let us take the example of Kalama, WA, where SpaceX has reportedly installed one of the Ka-band U.S. gateways initially filed with the FCC. SpaceX is said to have installed 8 gateway antennas at this gateway station. The NSR toolkit calculates a maximum of seven satellites visible at this location, so an eighth antenna is likely required as spare and/or for transitioning beams across orbits while all other seven antennas remain connected to visible satellites. The toolkit also provides “look angles” and elevation angle distribution for configurable locations, as such distribution influences both link delay and IP throughput.

SpaceX mentioned the ability to reach over 100 Mbps and sub-20 millisecond link delay for user terminals. While it is hard to assess speed test results without additional information, the PING latency samples shared in the presentation are interesting data points to analyze. 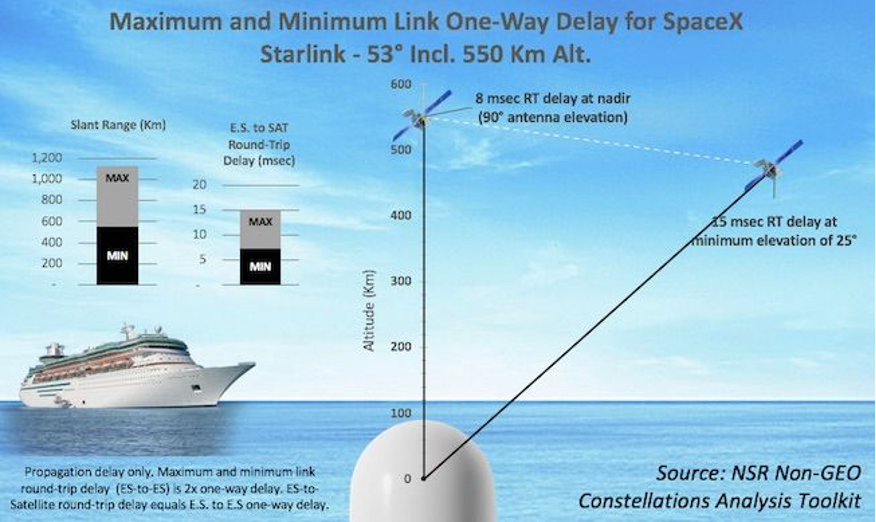 SpaceX mentioned low latency capability but note that sub 20 milliseconds PING means that results shown in the presentation were recorded at near-vertical antenna elevation because at 550 km altitude, Starlink has a round-trip propagation latency of at least 16 milliseconds (at sub-satellite point, with 90-degree antenna elevation). At the currently minimum antenna ‘scan angle’ of 25 degrees PING results should always be higher than 30 milliseconds, prior to adding terrestrial latency from the gateway point to the final server or destination host across the open Internet. So it seems that SpaceX has cherry-picked best user test results for the presentation. Indeed, beta-testing reports leaked by users show a wide disparity for both speed and latency, which appear quite reasonable at this early stage as SpaceX will sure be making adjustments as network deployment progresses and user terminal systems go through a series of improvements or updates. 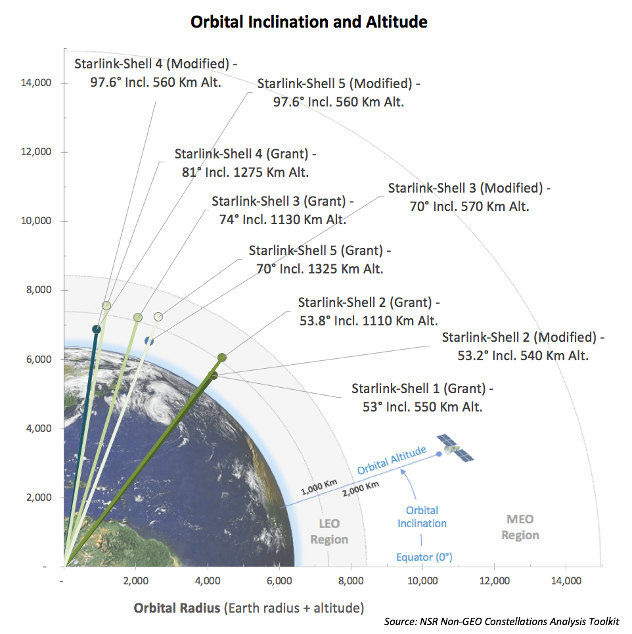 In the presentation, SpaceX refers to MVDDS. This is outside the scope of this article but, essentially SpaceX challenges a request by the MVDDS 5G Coalition to permit use of the 12.2-12.7 GHz spectrum band for two-way mobile broadband services.

In its letter SpaceX also urges the FCC to “act expeditiously on SpaceX’s proposed modifications”, as listed in the table below and visualized in toolkit output charts. 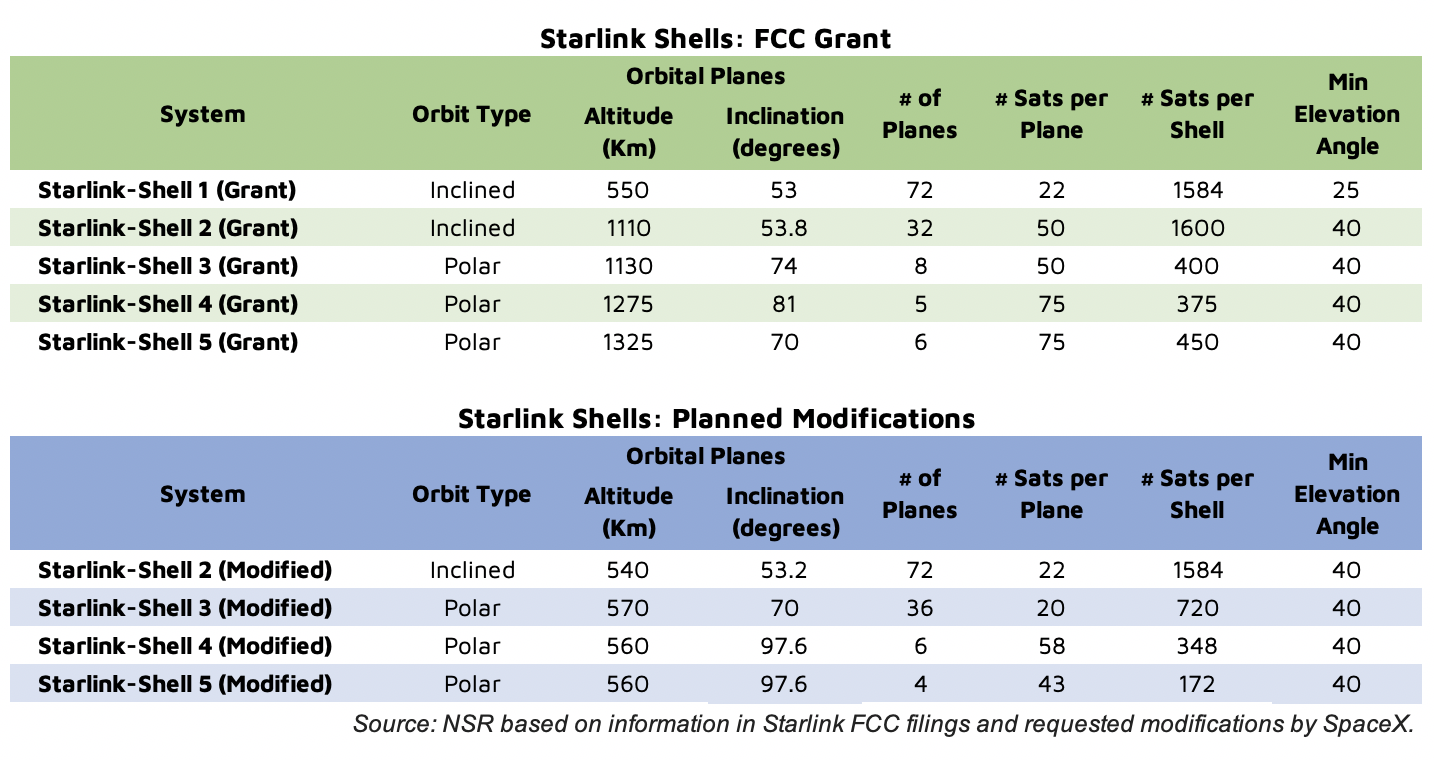 Proposed modifications have implications on link delay, beam handoffs, satellites in visibility and other important aspects including link IP throughput. All of which can be assessed with NSR’s Non-GEO Constellations Analysis Toolkit. 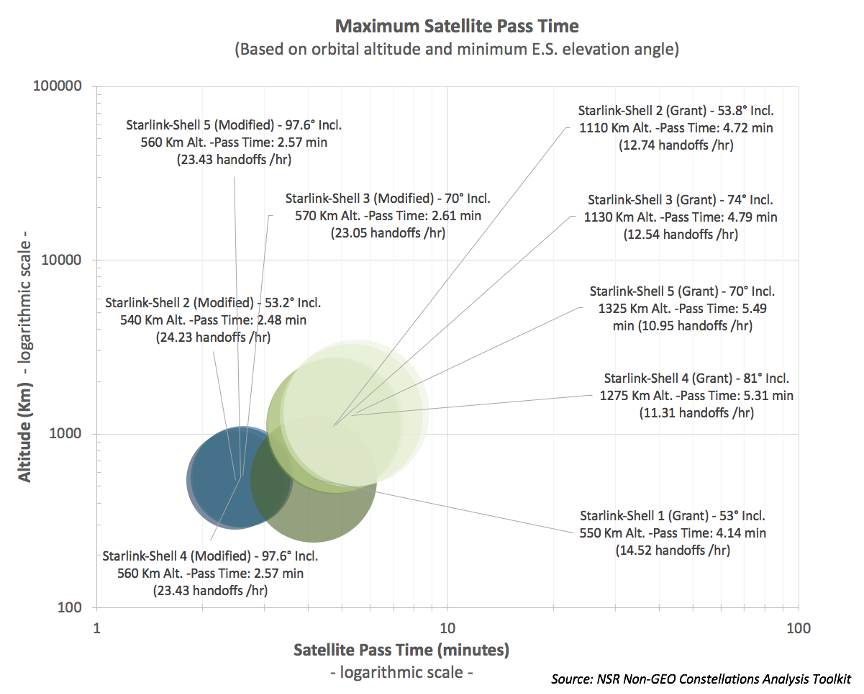 For an industry that has largely relied on GEO satcom for over five decades, advancements in Starlink deployment and service testing could be considered an inflexion point. SES O3B pioneered MEO satcom years ago and remains the only Non-GEO high-throughput operational system, but SpaceX’s accelerating progression towards full deployment marks the beginning of a new era where thousands of HTS assets manufactured and launched in large scale drive satellites communications towards mainstream uses and applicability.

NSR provided above a few analysis examples of many scenarios that can be assessed and simulated with NSR’s Non-GEO Constellations Analysis Toolkit. Calculations and visualizations show how one can make sense of information, even for tightly closed and vertically-integrated initiatives like Starlink. Planned modifications have implications for important metrics benchmarked in the toolkit, including number of beam handoffs, latitudes reached by each shell, satellites’ footprint, link delay and beam IP throughput, all of which are X-rayed and benchmarked in the toolkit.