SpaceX has now launched 242 of the 42,000 total satellites planned for the Starlink constellation, according to their latest filing and it is the largest commercial satellite constellation operating in history, despite having a mere 0.6% of the total in orbit. As a first mover and largest system in the satcom business, Starlink’s future is bound to have a butterfly effect on the rest of the small satellite market by influencing investors’ interest in other missions.

Much like the chaos theory where the butterfly spreading its wings at the Equator can create massive unstable weather systems such as tornados in the U.S. weeks later,  spinning off Starlink for an IPO could lead to such a larger-scale impact on the small satellite market unforeseen.  NSR’s Small Satellite Markets, 6th Edition report assesses over 140 current or planned smallsat constellations. Based on the factors studied , of which the most critical is current funding and the ability to raise money (or lack thereof), it is estimated that 35% of all constellations planned are not likely to launch, with another 5% deemed at low likelihood. Of the constellations expected to launch over the next decade across all applications, Communications will dominate the market by application, with Starlink making up a major portion. 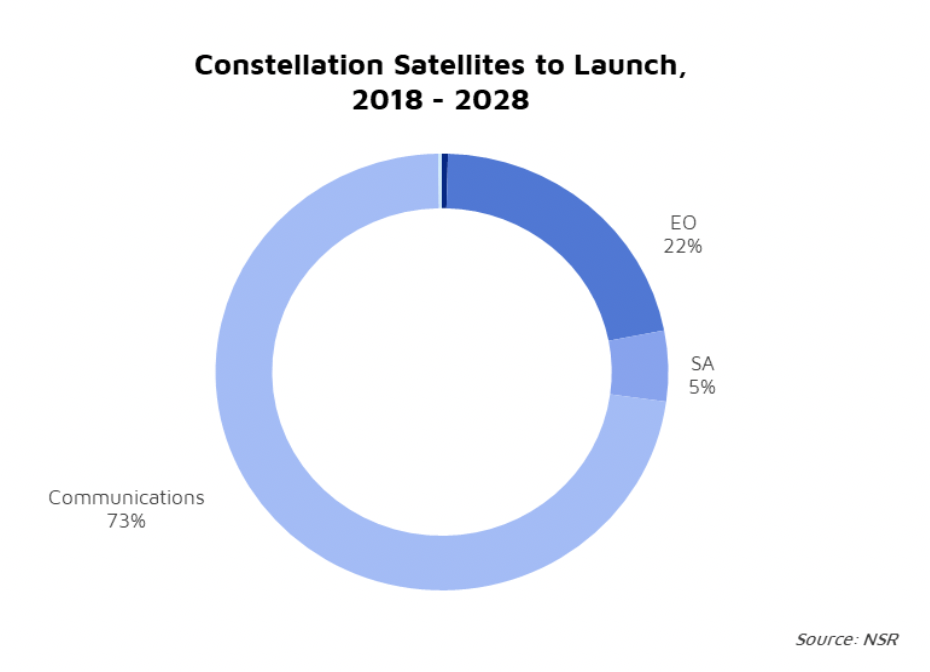 Funding is one of the biggest challenges faced by NGEO constellations, due to the scepticism and uncertainty around the business case. Investors are cautious due to lack of information and understanding about the LEO business model and are holding back until constellations currently in development like Starlink and OneWeb are further along. While OneWeb has been slow to launch and now has 40 satellites in orbit, SpaceX is following a more aggressive timeline to get satellites into orbit to reach the revenue generation stage much quicker and, to increase investors’ confidence in the project. In terms of funding, SpaceX has raised over $1 billion for Starlink. However, the CAPEX associated with manufacturing, launch and serviceability of 42,000 satellites is expected to be orders of magnitude higher than current funding, and while some of it will be recovered by revenues generated by the constellation itself, it is safe to say that it will not be enough to fund the full constellation. Furthermore, SpaceX has maintained to date that the revenues from Starlink will help fund the Starship project. So how does the IPO fit into this equation?

Taking Starlink public has one obvious advantage – the “free” cash associated with the sales of the stock. While this cuts down the share of Starlink and therefore SpaceX’s share of the profits, the company’s valuation and the value of each share is expected to increase with the IPO, if done right. Two of the most critical factors for the success of an IPO are initial pricing and brand perception. With Elon Musk’s brand and space considered a “sunrise” industry, the latter hurdle can be considered easy to overcome. The stock price is a tricky equation to solve – if the chosen price is too low, it leaves money on the table and if too high, the stock prices can fall quite quickly bruising the company’s reputation. Assuming the shares are priced appropriately, the questions then remain:

At the micro level, if additional funding is required – whether through FPO or equity – and at the macro level to maintain investors’ perception of this market, it would be critical for Starlink to start generating revenues as soon as possible (and in line with their projections at the time of the IPO).

This will help increase Starlink’s market capitalization and therefore its ability to issue more equity shares at relatively high offering prices. And there lies the biggest challenge – revenue and profit generation. A major share of revenues for Starlink is expected to come from government contracts. While that is promising, maintaining a 40,000+ satellite constellation, with competition from terrestrial solutions and potentially other LEO constellations (like Amazon’s Project Kuiper), technical challenges in the ground segment as well as difficulties in obtaining landing rights can severely restrict the revenue and profits from the constellation. Managing the initial and ongoing investor and public expectations will be crucial for the long-term success of the IPO and the company’s valuation and will open investment doors for other smallsat constellations. Even though the business cases, services offered and even the target market may be different for other smallsat constellations, a system like Starlink can be highly influential to sway investors – one way or another. Similarly, if Starlink fails to meet investors’ expectations, it will not only impact Starlink’s valuation and investments in other SpaceX projects, but will also raise more concerns around the constellations business model in general, resulting in a decline in funding for similar projects.

It is hard to argue that there is a direct, albeit disproportional, link between the success of the mega constellations and the rest of the small satellite market. Small satellite constellations make up 75% of the overall market (in number of satellites). Amongst the numerous challenges NGEO constellations face including regulatory hurdles, launch and manufacturing constraints, competition, and distribution, the ability to raise funding is a critical determinant of the success or failure of a system – even if only in the short term.

Investors assess various factors before deciding to fund a company, and one of the major considerations is the competition – both as a competitor but also to draw parallels about the market they are thinking about investing into. Elon Musk and the SpaceX brand compounded with the largest and highest risk NGEO constellations has accumulated a lot of interest from investors and any updates – strategic or otherwise – will most definitely have a butterfly effect and impact most future investment in the smallsat market at-large.