State of the Satellite Industry – The NSR FSS Index

Much has been commented about the current state of the industry: capacity oversupply, declining capacity prices, a shift to service businesses to strengthen top-line revenue, partnerships with end-customers, and consolidation necessity to future-proof. After a careful study of the past few years, it is certain that most trends are true – reflecting operator strategies as 2017 financial results show. Though, less quantified is the effect on the FSS industry due to these unanticipated changes in recent times. From FSS wholesale price decline as analyzed in NSR’s Satellite Capacity Pricing Index, 4th Edition, revenue and market cap erosion, to changing IRR estimates of fleets older than 7 years, and eroding asset value – the FSS industry definitely is in a state of transition.

The chart below mentions 4 critical parameters defining industry progress. From 2015 to 2018, impact of contract duration, capacity supply, Global Mean Price, and financial parameters such as revenues and EBITDA are compared to build an “FSS Index”. The decline in both video and non-video contracts is sharp and closely mirrors the price decline over the same period. Traditionally a shorter contract would mean a higher price, although the corresponding increase in supply every year has ensured the price correction upwards couldn’t occur.

While FSS capacity increased at ~14% over the past 3 years, HTS capacity more than doubled during the same period. This had an outsized influence over both relevance of FSS capacity (barring certain maritime segments) and wholesale pricing as shown in the Global Mean Price Index.  Both video and non-video pricing declines had direct influence over top-line revenues of the Big 4 operators in the same period. Simultaneously, HTS prices corrected sharply as well, owing to lower CAPEX/Gbps capacity introduction, and with operators starting to embrace a services model, the EBITDA margins have started to come down as well. Thus, the industry grapples with key questions on future growth. 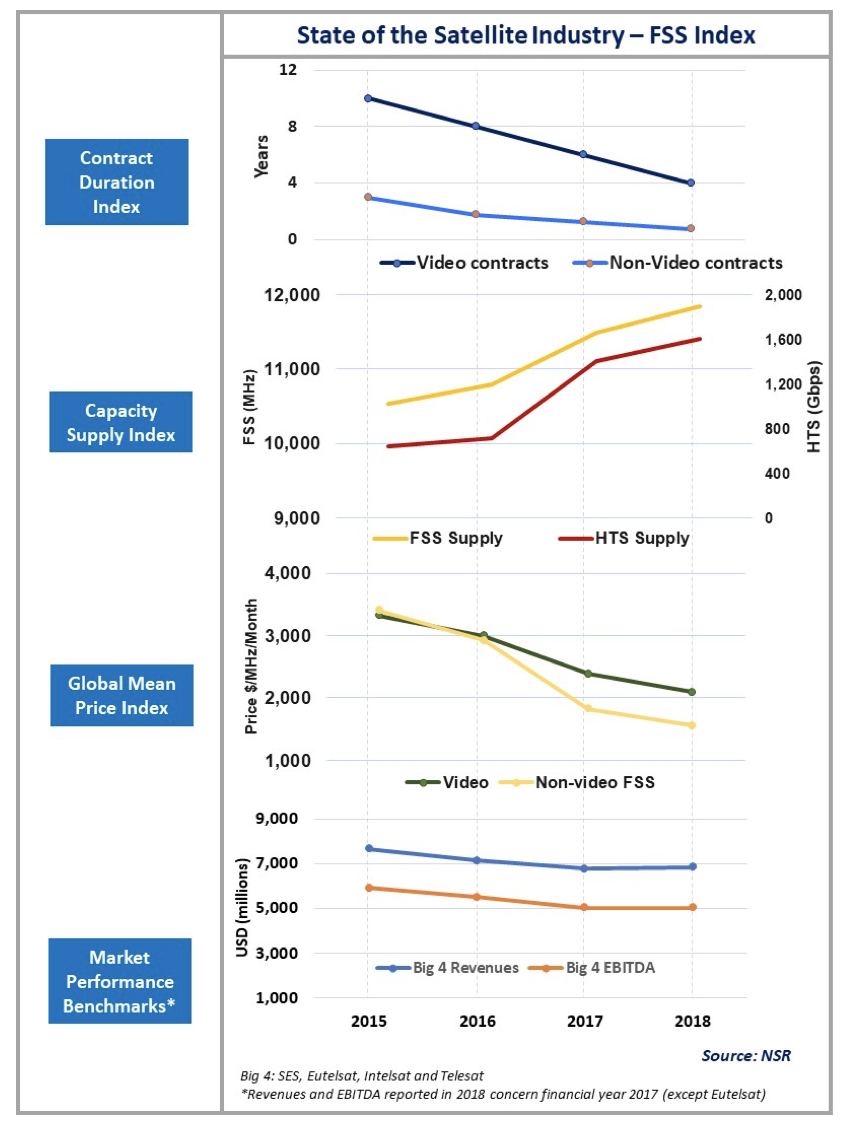 As the graph shows, from 2015 to 1Q 2018, contract duration decreased from an average 10 years to 4 years for video and to less than 1 year for non-video.  Global FSS capacity supply increased by 14%, while HTS capacity increased almost 100%.  Prices dropped by more than 50%, though revenues for the Big Four dropped by only 10-11%. Most capacity deals signed during the 2016-17 price decline period reflect future revenue guidance for operators, thus only partly affecting top line revenues from 2015 to 2018 reported results. In the same period, demand for backhaul, broadband, trunking, maritime, aero and high priced Gov/Mil sectors increased, while video distribution and DTH in developed markets lagged. Along with this demand uptake, there has been a surge in managed services revenue for SES and Intelsat side as well, covering video, maritime and Govt/Mil sectors. The anticipation was always that this increase in demand uptake, along with forays into managed services, would propel top-line revenue (at least 5% growth), while simultaneously checking the erosion of capacity pricing by un-commoditizing it. This anticipation hasn’t come true, and capacity prices have fallen sharply due to competition, resulting in this 10% revenue decline for Big 4.

Analyzing 2018, the industry (for all purposes of growth and stability) views HTS as the new messiah, whereas several strategies have been touted by the industry to overcome the slump. Prices for HTS capacity may still have more room to decline, adjusting to bulk buying from service providers, but FSS capacity appears to have reached precariously low levels. Barring high SLA corporate networks and high-value Energy segments, most capacity is sold at just above break-even levels, with C-band going below break-even in many cases.  The future of the FSS market thus remains non-sticky and unstable as capacity supply reaches beyond 12,000 36 MHz equivalent transponders in 2020. A few critical factors are analyzed below to ascertain the buyer-seller dynamics in the past couple of years, and what can be expected in the future:

Bottom Line: What to Expect in the Future

Satellite markets inevitably are moving towards an integrated approach, and it wouldn’t be surprising to see falls in the contract duration index, Global Mean Price Index and revenue/EBITDA margins further until 2020, before a revenue rebound occurs. To understand the impact on FSS and HTS markets, do reference NSR’s 2019 forecast prices.

Further, market cap and share prices are precariously placed in the next 1-2 years, whereas dividend pay-out has sharply decreased.  Future CAPEX investments have also put some operators on the brink of investment grade. Whether the next generation of HTS and non-GEO satellites boosts top-line revenues for the operator industry remains to be seen, though certainly it is a tough road ahead for the FSS segment.