The polar regions have for good reason historically attracted a very small amount of investment from satellite operators and service providers. As NSR examines in its Polar Satellite Markets, 2nd Edition (PSM2), the majority of capacity over the Polar regions has generally been spillover capacity from other markets, namely North America, Western Europe, and Russia (as well as a very small amount of Antarctic capacity from Australia/Southern Cone beams). Moving forward, it appears that markets such as oil & gas, maritime, and even aero will remain small enough in the Arctic to not justify any truly “dedicated” capacity. However, advancements in HTS (GEO and LEO) technology, coupled with potential future advancements in ground terminals and other components of the satellite operator to end user cost structure, may justify further investment into the region on the supply side, particularly if this is supplemented by something such as a governmental USO program.

Supply in the Polar Regions Today

Most of the supply in the Polar regions today is spillover FSS capacity coming from satellites that were launched targeting other markets. The region’s largest markets include almost the entirety of Greenland, as well as parts of Iceland, Finland, Norway, Northern Canada, Northern Russia, and roughly the top half of Alaska, as well as Antarctica. NSR estimates that as of EoY 2016, the Polar regions had around 230 TPEs of FSS capacity, with around 60% of this being Ku-band, and the overwhelming majority (~96%) being over the Arctic. 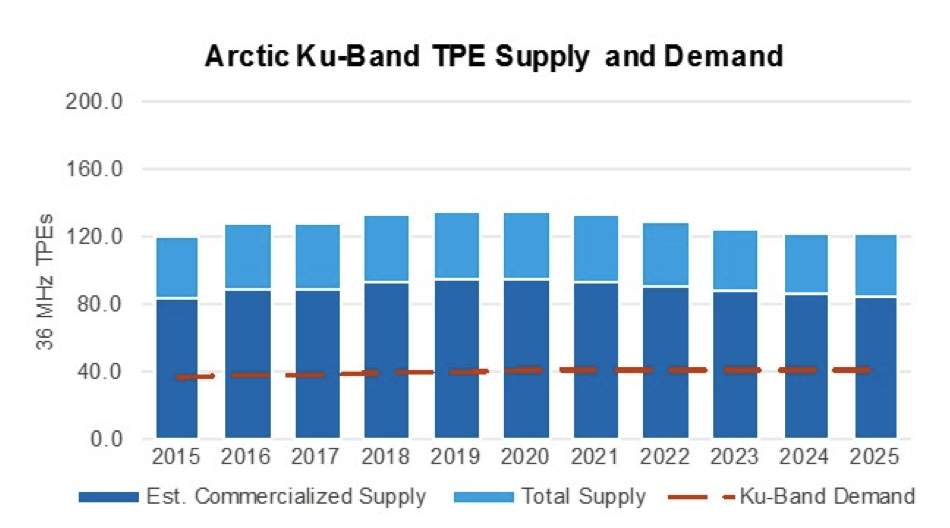 Given the region’s high/low latitudes, the look angles are generally quite low, leading to a relatively small percentage of capacity being commercialized. This is exacerbated by the fact that much Polar coverage is around beam edges, lowering the EIRP, and this leads to the region’s commercialized supply being around 160 TPEs. NSR estimates the commercialized fill rate in the region to hover around 50%, and with future demand from commercial activity (O&G, maritime) panning out to be somewhat less robust than previously expected, there remains relatively little impetus for satellite operators to launch any dedicated capacity over the Polar regions. Moving forward, however, there is the potential for change in this dynamic.

Supply in the Polar Regions Tomorrow

Despite limited population and a very low density of commercial activity, the future may hold further opportunities for the Polar regions. With the advent of high throughput satellites (HTS) in both GEO and Non-GEO orbit, which allow for significantly more cost-effective point-to-point data transmission, there are believed to be opportunities to connect the Polar regions, though these opportunities may not necessarily be driven by market forces. Governmental USO and/or military programs are one of the obvious possibilities for justifying future investment. At this point the consensus among operators as it relates to Polar capacity launches appears to be a “wait and see” approach, with no one wanting to commit to a satellite until there is a concrete government commitment to help fund said satellite/s.

With that being said, LEO-HTS constellations are expected to have a larger percentage of capacity devoted to Polar regions, simply because the orbital planes will involve passing over the earth’s poles. NSR sees around ~900 Gbps of Non-GEO-HTS supply in the Polar regions by 2025, with this supplementing the approximately 100 Gbps of GEO-HTS capacity in the region by that time. Again, noting LEO-HTS architecture, there will undoubtedly be significant capacity launched over the Polar regions, however it remains highly uncertain whether this capacity will see reasonable fill rates, with the most apparent method for reaching this goal being to secure a governmental USO, telco, or military anchor before launch.

Among all countries in the Polar region, Canada appears most likely to at some point pull the trigger on acting as an anchor client for a LEO-HTS constellation, with Telesat having recently made note of such a possibility, and with the Canadian military having outlined plans for a potential arctic constellation with satellites in elliptical orbit around 1 year ago. Beyond this, other markets that may see justification to launch high-throughput, low-cost capacity systems include Alaska, with Alaska Communications having recently signed a non-exclusive MOU to distribute OneWeb LEO-HTS capacity to Alaska starting in 2019. 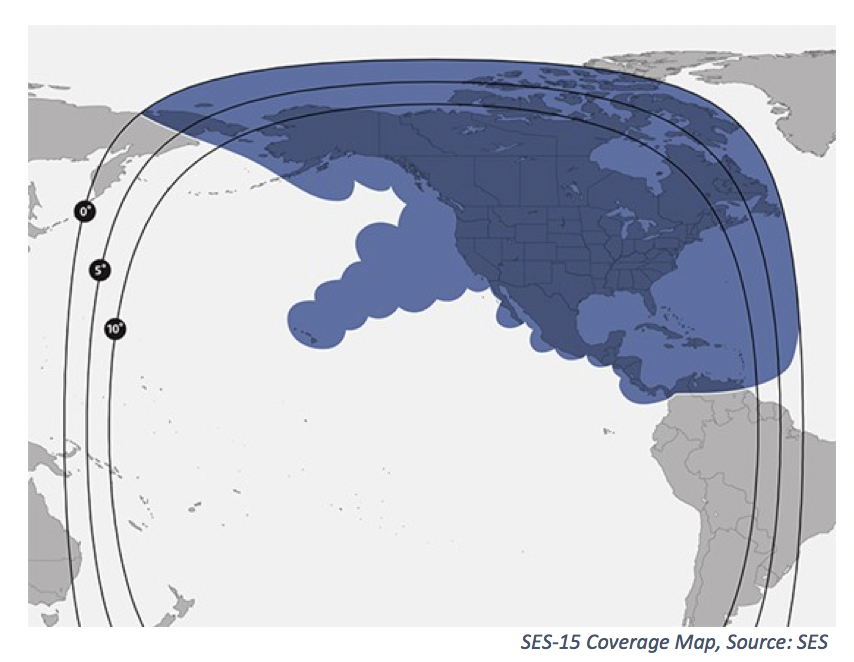 Beyond government and military programs, future polar supply will be in some instances driven by global coverage required for mobility applications. With increased air traffic between Asia and North America, for instance, operators are piling capacity into the North Pacific, with SES-15 being an example of this (coverage map at right). In terms of raw capacity, this will represent a comparably small number, however the revenue opportunities are expected to be significant.

Supply in the Polar regions has historically been spillover capacity, with the edges of FSS widebeam coverage over NAM, WEU and CEEU oftentimes seeing some coverage over the poles. By and large, this trend will continue in the GEO space, with look angles prohibiting optimal coverage. However, a large increase in HTS capacity globally over the coming decade will mean that some of this inevitably spills over to Polar regions, with this representing a huge increase in supply. Beyond this, advancements in technology related to effective deliverable cost per Mbps have increased the appeal of using satellite for USOs or military activities for countries such as Canada, the United States (Alaska), and Russia. Bottom line, while supply in the Polar regions remains relatively limited at this point, changes in bandwidth economics and geopolitics could allow for a large increase due to a dedicated LEO-HTS system in the coming years, though the return on such investment without a governmental or telco anchor customer remains uncertain.