The relationship between space start-ups and government has been an integral cog in the development of multiple space verticals. Government undertakings with emerging startups offer investors potentially attractive returns and encourages them to follow suit with their own investments.

NSR’s Emerging Space Investment Analysis, 3rd Edition report shows $36 billion was invested over the last 20 years in the emerging space ecosystem with 2020 accounting for a record $7.7B. NSR tracked over 200 government deals in emerging space companies, with a total of over $2.7B invested. The deals represent a clear picture of space verticals that are top priorities for governments around the world. Evidence of the strong relationship between government deals is reflected in commercial space investments. In particular, the ground segment, launch, manufacturing, spaceport, earth observation and exploration verticals. 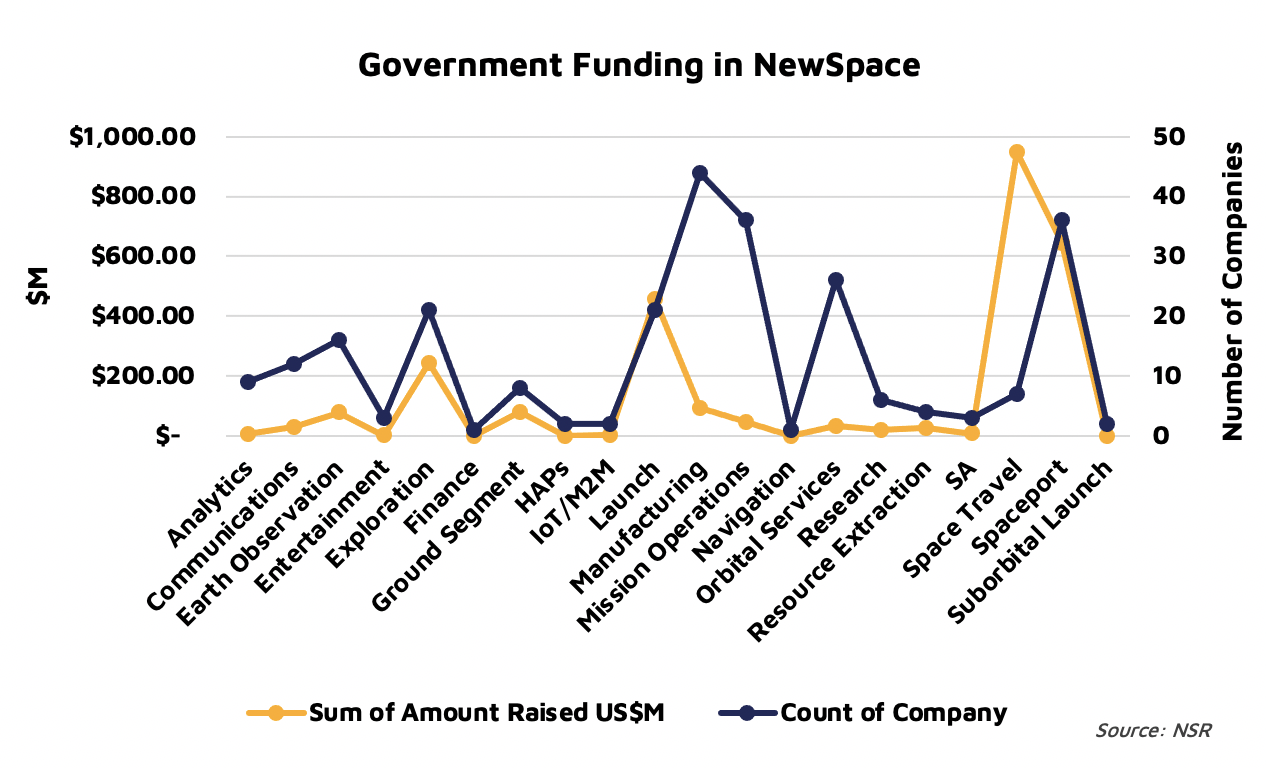 Space companies and governments have a co-dependent relationship as customer and potential supplier. Governments and militaries benefit from access to remote sensing imagery, and EO companies benefit from government support and orders that today make up most revenues in the market. One of the ways Earth Observation companies innovate is by bringing new types of data to the market, much like Capella Space’s recently announced research contract with the U.S. Space Development Agency. Since the beginning of the year, EO funding is seeing heightened activity with private funding in EO startups largely translating to improved imagery choice for governments and militaries.  The dual-use nature of commercial imagery, the same data used to improve agriculture forecast can also be used for military operations, helps explain the recurring trend.

For governments, the funding of private start-ups gives evidence of a commercially-available supply base that continues to thrive and improve. Most recently, Axelspace raised a $24M Series C to expand their optical data offering. Thermal/infra-red imaging providers Hydrosat raised $5 M, Satellite Vu as well got $5 M, Albedo received $10 M, Satlantis had a 2nd round  financed to the tune of $17M, and OroraTech closed a Series ‘A’ for $7 M.

On the radio frequency (RF) side, Spire is going through a reverse IPO with a $245 M private investment, Unseenlabs just raised $24M while Hawkeye360 continued to attract funding with a $55 M Series ‘C’ round.  Furthermore, UMBRA raised $32.4 M to compete in the already crowded SAR domain, and lastly Orbital Sidekick and Pixxel both raised funds for their planned hyperspectral imaging activities.

Thus, the diversity in data sources from optical, radar, to radio frequency through to infra-red and hyperspectral are generating funding that will help them meet demand from government customers who have clearly indicated their strong desire for these types of products today and in the future. And to help keep the ball rolling, we expect to find several former generals and high-ranking agency officials on the boards or the C-suite of these companies, as they are key assets to facilitate relations with the government and military customers.

A Valid Role for Government

One might argue that the government has no such need nor business to be involved in supporting private sector space companies. However, the NGA has recently ranked access to remote sensing imagery by countries to highlight the strategic importance of having access to several sources of data. The strategic priorities of nations has and will always be security and power projection and therefore, with increasing ‘competition’ from countries such as China on all fronts, there is a trend for more collaboration between governments and space companies to achieve these goals.

Furthermore, the validation that governments as investors/clients bring can further help space businesses. Governments can play the role of anchor customer to innovative solutions provided by emerging space companies in a cost-effective and timely manner. Additionally, the government can offer non-dilutive funding, an investors’ favourite. Together with long and market-resilient contracts, government support presents ideal leverage for entrepreneurs to demonstrate their business plans and often raise further capital.

Governments have long benefitted from supporting innovative startups, either through early-stage funding like grants and incubation programs. Years of continued support have helped create multiple commercial space champions across different space verticals in the west, filling and emptying investor pockets along the way.

NSR believes the link between government funding activities over the decades will continue to drive a good portion investments in the NewSpace economy. Earth Observation and the ever-increasing diversity of data sources is a fitting example that demonstrates the reciprocal and symbiotic relationship that exists between government and space start-ups. To meet their data and imagery requirements, governments are prepared to offer attractive conditions to emerging space companies to get it done. Start-ups need government support to survive, and governments need innovative start-ups to thrive.