Following the launch of the Gaofen 6 satellite last weekend, China matched – and three days later surpassed – its 2017 launch rate a mere 5 months into the year. If China achieves its planned cadence to exceed 40 launches in 2018, it would more than double last year’s total and quadruple the rate of a decade ago. Another player launching at a fast pace, SpaceX, is already more than halfway to its 2017 launch rate, the highest rate ever seen from a commercial player. To what extent do these increased activity levels impact the global launch industry and shape the evolving launch landscape?

The impact of China’s rapidly increasing launch rate is, in the near term, largely limited to geopolitics, leading other nations to reassess the strength of their own industry or any perceived change in technological advantage compared to China. Though predominantly a result of increasing demand for domestic satellites (a separate issue in terms of impact), the higher launch rate also reflects significant capabilities via ongoing development of new vehicles (such as the Long March 5) while demonstrating an ability to reliably increase production and launch operations of the Long March 2, 3, and 4. And China’s commercial impact is mounting: China Great Wall Industry Corp has secured five contracts with developing nations and commercial entities in the last year, bundling satellite manufacturing and launch contracts into a single compelling deal and capturing market share from Western providers.

SpaceX’s higher launch rate is having a much broader impact on the global market. As the newest operational launch service provider in a fairly static GEO market, SpaceX’s growth has taken market share away from competitors in both the commercial and U.S. Government markets.

Yet the 2017 and 2018 SpaceX launch rates do not necessarily reflect an ongoing status; delays in reaching the targeted Falcon 9 launch cadence led to a backlog of customers that fueled a temporary state of high launch rates. Nonetheless, the many launch opportunities facilitated SpaceX’s future success by fueling R&D advances: it has incrementally improved the Falcon 9 to the Block 5 version, as well as testing aspects of reusability on customer rather than company-funded R&D launches.

With below-market pricing that helped boost launch rates and capture market share, SpaceX pressed its competitors to follow suit and implement a range of cost-cutting measures, bolster plans for lower cost, more efficient next-generation vehicles, and more seriously consider reusability. This has set the stage for a vastly different launch landscape in the early 2020s. All current players, plus new entrants like Blue Origin and government-centric companies like ULA and MHI, will debut new vehicles targeted for the commercial market. As each of these launch service providers seeks to establish market share and build up to targeted launch rates, will there be enough demand to sustain them?

NSR’s Satellite Manufacturing and Launch Services, 8th Edition report found that, aside from mega-constellations, demand in the next decade is only static to slightly increasing. GEO launch rates are not expected to increase in the coming decade, and non-GEO business remains speculative with high-risk, high-reward multi-launch contracts that will support few players. 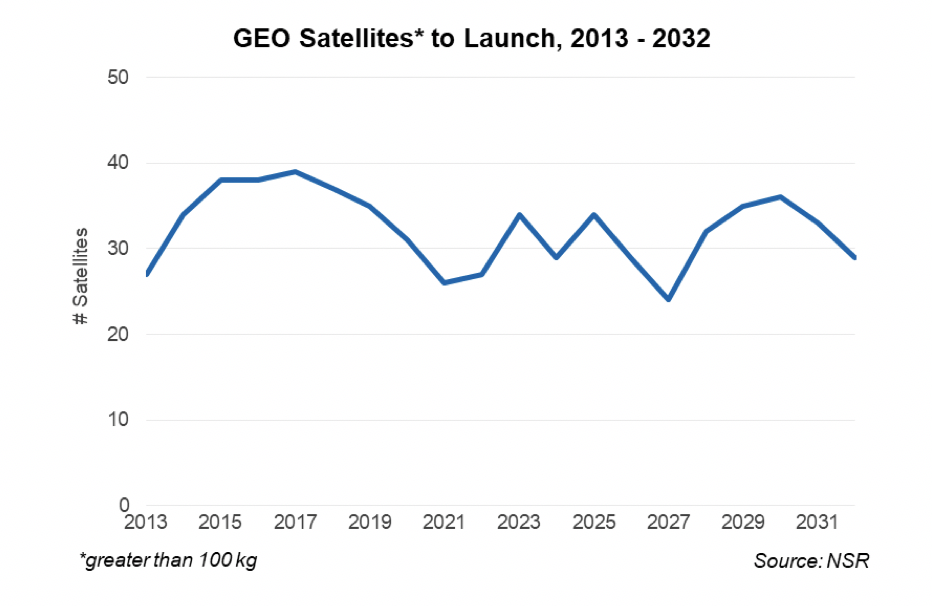 Each next generation vehicle has a launch rate and associated revenue needed to sustain manufacturing and operations. Given this expected demand, not all will be able to achieve their minimum viable, let alone optimal, launch rates. This heightens the importance of a rapid development process, entry into market, and early launch success in establishing market share from which to grow.

Both China and SpaceX have made waves with launch rate increases in recent years. China has prompted international discussions on competitiveness in space, while SpaceX has elicited a drive from competitors to lower prices and refocus on innovation in the launch business. Yet both face a renewed market landscape in the coming years. As players across the globe jockey to capture (recapture) market share with new vehicles, maintaining launch rates will be key to building lasting success.