Home > The Bottom Line > The Cost of Growth

The Cost of Growth

Satellite operators have for some time enjoyed what the rest of the telecom industry might call “out of this world” EBITDA margins, and strong profit margins to boot. Operating in a niche market—for context, the combined revenues of the 10 largest telcos globally are around $850 billion, the total revenues for satellite telecom are estimated at ~$12 billion—has allowed satellite operators to live quite well, enjoying higher prices because their target market almost by definition uses satellite due to having no other options.

NSR has since last year noted that satellite operator EBITDA margins are likely to fall moving forward. This is particularly true for operators that aim to get closer to the customer through selling more megabits as opposed to megahertz, as well as seek new markets outside of the traditional “15-year DTH contract” business model characterizing the satellite telco market historically.

As discussed in NSR’s Satellite Operator Financial Analysis, 7th Edition, the operator most impacted by this phenomenon historically has been Thaicom, coming largely from the company’s early entry into the GEO-HTS market with iPSTAR; however, more recently SES has also seen EBITDA margins fall due to branching out from traditional markets. As the chart above shows, SES saw its top-line EBITDA margin decline from 74.2% in 2015 to 70.2% in 2016, due in large part to the company’s acquisition of O3b and RR Media (with “same scope” EBITDA margin, e.g. not including the acquisitions being more resilient at 73.7%). In an industry that prizes its high EBITDA margins (with investors perhaps prizing them even more), this is a remarkable decrease to see accepted by SES, and ultimately, it goes to show that 1) the company sees O3b (and, presumably to a lesser extent, RR Media) as keys to future growth opportunities, and that 2) there are likely not that many growth opportunities out there that do not involve lowering EBITDA margins.

As SES sees EBITDA margin decline due to investing in what the company sees as key growth opportunities, operators such as Inmarsat have in fact seen EBITDA margins increase, although to levels still well below traditional FSS players. The past 4 years have seen Inmarsat’s EBITDA margin increase from 51.4% in 2013 to just under 60% in 2016, with this coming about, as far as NSR can see, from stronger expense control, but also leasing more capacity per in-service unit by having upgraded much of the company’s system to HTS (i.e. Inmarsat Global Xpress). 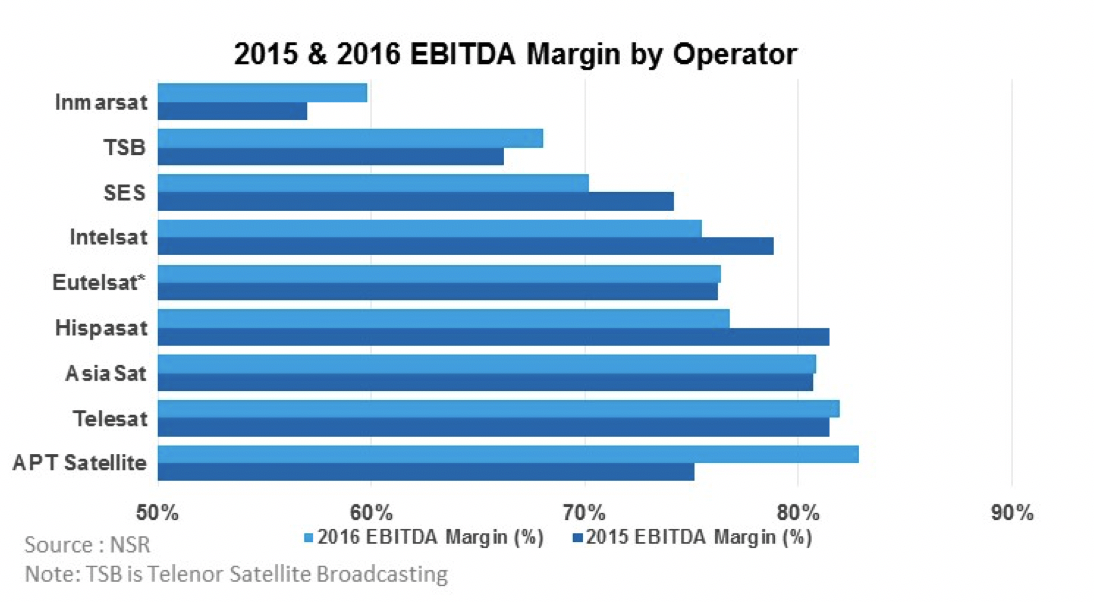 Moving forward, NSR expects the EBITDA margin performance of FSS operators to bifurcate to some extent, with operators focused on solely leasing raw capacity (largely regional players) seeing EBITDA margins remain in the mid 70%-low 80% range, and operators that vertically integrate, acquire/procure MEO/LEO assets, and otherwise alter their business models significantly, seeing EBITDA margins fall as OPEX becomes a larger component of cost structure. This is something of a tradeoff, with operators maintaining the business model of selling wholesale capacity seeing stronger EBITDA margins in the short-term, but opening themselves to higher risk of commoditization in the long-term. Conversely, operators who move to vertically integrate today will see growing pains in so doing, but will also find that should prices continue to fall for raw capacity, their vertically integrated business models will prove much more resilient at maintaining margins.

Ultimately, NSR views this evolution as generally a healthy one, so long as the industry can expand its addressable market. The world’s largest telcos all have EBITDA margins in the 30-40% range—abysmal by satellite operator standards—and are generally fairly profitable companies. Beyond this, as CAPEX per unit of capacity declines, there will likewise be less depreciation relative to each unit of capacity sold, thus helping boost margins despite not boosting EBITDA.

Bottom line, many operators today are struggling to find a macro vision for the way forward, but in general, the two paths appear to be to vertically integrate, or to not vertically integrate. In the short-term, the latter is certainly cheaper, and easier on the EBITDA margin, but in the long-term, should prices (and margins) continue to fall, lack of vertical integration may lead to operators finding their value proposition evaporating into thin air, as competition for eyeballs erodes the value of video in the long-term, and commoditization of data diminishes the value of point-to-point in the here and now.