Home > The Bottom Line > The End of Linear TV Satellite Distribution, As We Know It?

The End of Linear TV Satellite Distribution, As We Know It?

Video distribution via satellite has a platform lifecycle growth problem. As OTT competes for viewers with linear TV, content fragmentation pushes broadcasters to re-assess the economics of satellite distribution in comparison with terrestrial and cloud platforms. The principle of video neighborhoods’ network effects is thus challenged. Is this the end of linear TV satellite distribution, as we know it? How do alternate transport technologies benchmark against satellite capacity pricing?

End of a Virtuous Cycle

For decades, satellites have excelled in the global distribution of linear TV. “Content is king”, so the idea of seizing satellites’ broadcast economics to deliver TV channels to millions of viewers –either directly via DTH platforms or indirectly via satellite distribution to cable headends– consistently brought economies of scale to a stable ecosystem constituted by broadcasters, programmers, satellite operators, service providers and last mile distributors; including FTA and cable /telco TV operators.

Supply-side network effects in satellite TV distribution defined how such ecosystem sustained itself across a very long time and throughout major technological and TV market disruptions. The arrival of digital TV, as an example, gave birth to DTH, the very first digital service offered to 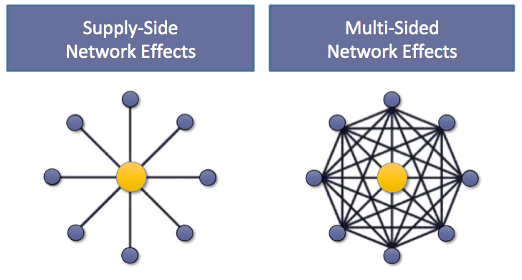 consumers, years before digital cable took hold. Developments in advanced coding, modulation and video compression technologies successively reinvigorated the ecosystem; such as when DVB-S2 and MPEG-4 AVC standards helped to catapult HD adoption. Not only did satellites begin carrying HD channels in distribution multiplex carriers, but also it was DTH players that, by virtue of broadcast preponderance, initially offered the most attractive HD channel bouquets. These technology leaps –interplaying with evolving satellite payloads– improved satellite spectral efficiency. Efficiency boosts did not lead to reductions in capacity demand because positive network effects increased demand of satellite capacity. In other words, satellites carried more bits per hertz of spectrum but network externalities drove video growth faster, so the number of TV channels, volume of capacity leases and stakeholders’ revenues jointly went up.

However, a number of market and technology shifts over the past 10 years began to eat into the virtuous cycle. Developments are colluding to challenge the marginal utility of video neighborhoods, through what we can call “negative network effects” that include: 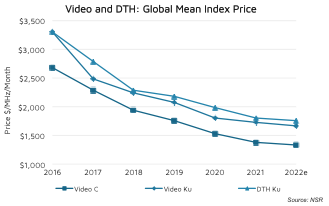 Therefore, capacity pricing and operators’ financial trends highlight a lifecycle growth problem for video distribution and DTH. While it is, certainly not a doomsday scenario for satellite TV distribution, as trends do not affect all TV channels, regions and operators equally; it is worth diving into satellite and terrestrial price mechanics to understand how video neighborhoods can be affected.

Widebeam satellites will continue being an OPEX-efficient means to distribute popular linear TV channels, but, given the trends mentioned, it is worth looking into the crossing points where broadcast economics begin to break down.

Let us analyze the case of a broadcaster or programmer that uses a satellite hemi beam to distribute niche SD and HD TV channels to last-mile distributors scattered across a region. Distributors may include cable operators, telco TV and terrestrial free-to-air players that aggregate millions of end subscribers or viewers. As it happens with niche channels, viewership is limited so not all distributors are willing to dedicate resources for HD last-mile distribution. Hundreds of cable TV headends may participate in the satellite neighborhood but only a subset opts to carry the HD TV version. Let us assume that ten last-mile distributors opt to carry the HD channel, uplinked by the broadcaster using the following video multiplex characteristics:

At a rate of $3,000/MHz per month for a prime video neighborhood, this niche HD-channel uplink costs the broadcaster $12,900 each month.

If the broadcaster were to replace the satellite channel uplink by CDN distribution, it would need to replace ten satellite IRDs by HLS (HTTP Live Streaming) IRDs and relied instead on a terrestrial CDN player with POPs nearby the last-mile distributors. NSR conducted an HLS-CDN distribution cost analysis assuming Amazon Web Services’ end-to-end pricing structure (publicly shared) for distributing a live video stream. Such analysis resulted in a monthly OPEX of around $2,000 per month for ten distributors (CDN egress points).

The result of this sample-case analysis shows that cloud-based CDN distribution can become less expensive than satellite when received by tens of distributors. For 10 distributors savings are approx. $11,000 per month. Considering a one-time migration cost of $2,000 per replaced IRD (HLS IRDs cost less but one-time costs considers logistics, manpower, etc.), this sample case leads to an almost immediate payback cycle of less than 2 months.

Pricing index and projections for video distribution and DTH in NSR’s SCPI7 report showcase continuous price pressures across regions, including prime video hot spots. Coupling this with what appears to be irreversible, continuous erosion in video revenues for operators highlights a platform lifecycle growth problem for satellites’ most successful and long-lasting application. It is not a doomsday scenario for satellite TV distribution, but content fragmentation and multi-sided cloud platforms will continue to eat into the business as it becomes harder to achieve the tipping point of critical mass to drive one-sided network effects in video neighborhoods.