Home > The Bottom Line > The Need to Succeed for Space Unicorns

The Need to Succeed for Space Unicorns

The Emerging Space Market has seen unprecedented growth since 2015 that translated into investor interest and investment dollars flowing into a variety of space startups. An industry that was known for its reliance on governments and public organizations is slowly diversifying its activities and welcoming the private sector. 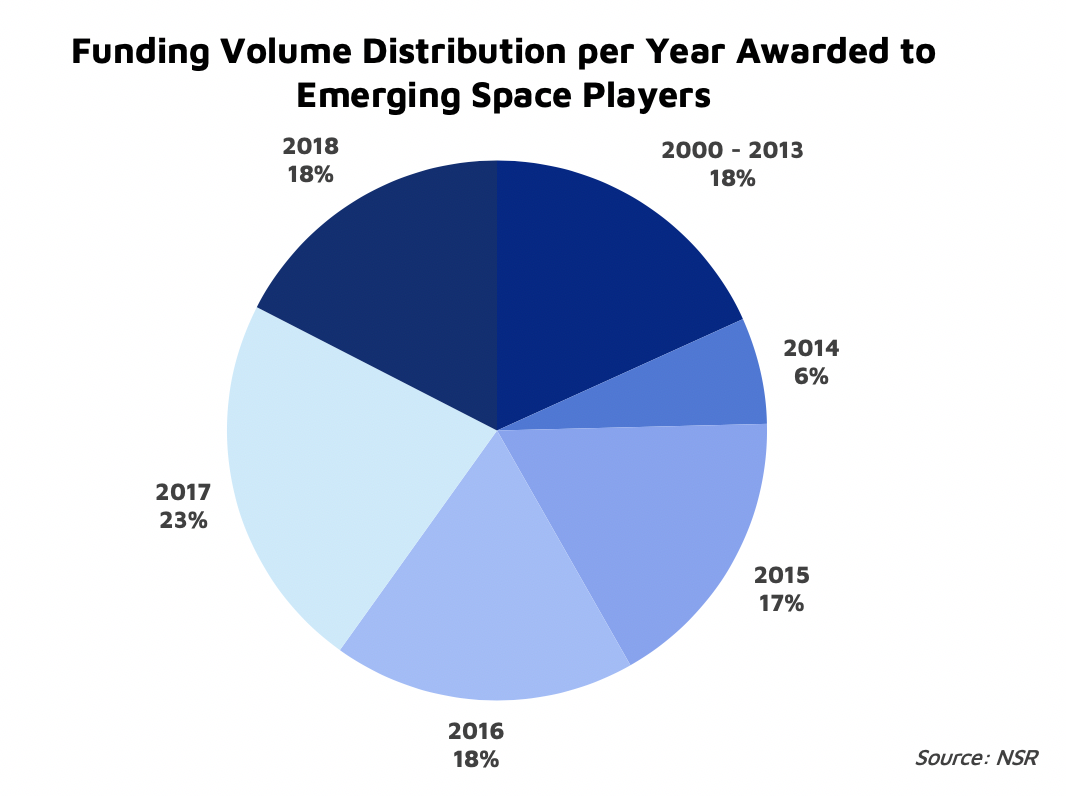 Technology has the been the biggest enabler so far and has been promptly supported by private investors.  In the initial days, it was the uber-wealthy and passionate who funded such ventures, but increasingly, these investments have been backed by Venture Capitalists, Private Equity and now also Large Corporations.

NSR’s Emerging Space Markets Analysis, 2nd Edition report noted that Venture Capital is now the largest investor in emerging space markets, both in number and volume of investments. Over time, as some of the startups prove their mettle, NSR expects bigger investors to join the funding frenzy and invest larger sums. The trend of larger investment rounds concentrated in a few companies follows the general technology investments in other industries. This has translated into a growing number of ‘Unicorns’ (privately held start-up company valued at over $1 Billion), which is all good news for the young emerging space industry, but this comes along with a big precaution, one that lies straight on the shoulders of these ‘mythical’ beasts that are space unicorns.

Some of the most well-known unicorns within the emerging space market are SpaceX, OneWeb, Virgin Galactic, Blue Origin and O3B (now with SES) with more than $1 Billion in investments committed for each of these companies. Together they represent more than 50% of the entire funding allocated to emerging space market players since 2000 and hence have a lot of investor confidence riding on them. Unicorns tend to get the most attention amongst investors and media when speaking about the space industry and become the de-facto torch bearers for the entire emerging space market, especially when it comes to bad news. 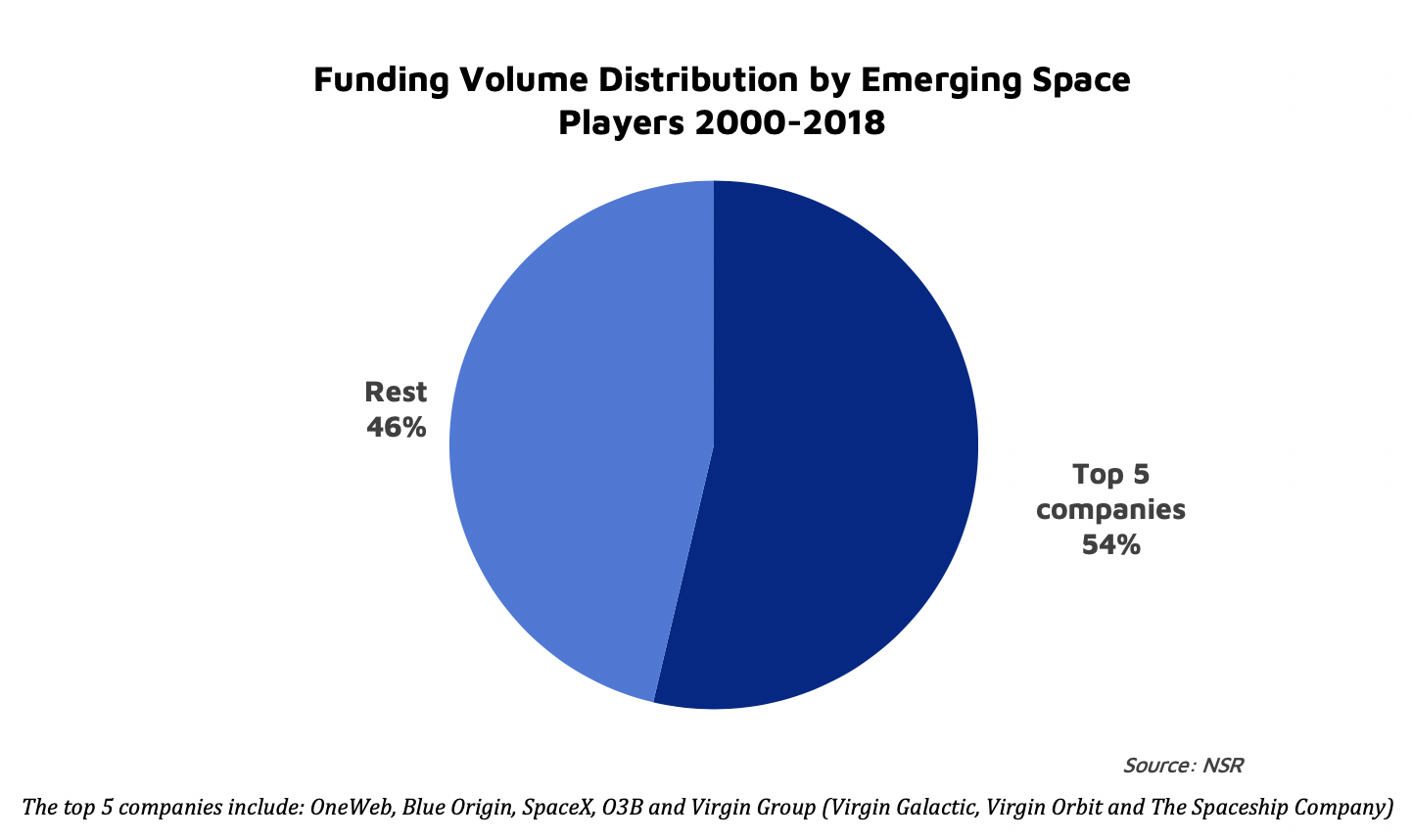 A comparable example of this precaution can be taken from the ‘Cleantech’ industry where, one of its unicorns, Solyndra went bust despite some big investors onboard, like Kleiner Perkins, Khosla Ventures and more than half a billion dollars of U.S. government federal loans. The Cleantech investment scene lost its shine since, and a lot of VCs have refrained from investing in the industry. The Cleantech investment scene in some way resembles the emerging space industry scene now:

Thus, the need (and expectations) for the torch bearers to succeed in their ventures is extremely high. A failure of one of these companies could be very bad news for the whole industry and can serve as a strong cautionary tale for investors in emerging space.

Failure for start-ups can arise from either of two reasons: 1) the inability of the company to generate business or 2) failure to raise the required capital for its survival.

And when it comes to technology financing, one country stands out in its ability to have a profound effect on the emerging space market: Saudi Arabia. At first glance, one would associate emerging space with Saudi Arabia, but this is because most tend to put their focus around technology development that is dominated by North America and Europe. What Saudi Arabia might lack in technology, they make it up in the other aspect behind most successful businesses; i.e. money.

The Saudi’s Sovereign Wealth Fund (also known as PIF) together with SoftBank, the Japanese multinational conglomerate, through its Vision Fund, has been behind some of the biggest names in Silicon Valley like Uber and Lyft, and sure enough, they have been involved with two of the largest unicorns in the space industry, i.e. Virgin Galactic/Virgin Orbit and OneWeb.

Richard Branson of Virgin Galactic fame was quoted as saying he suspended the PIF investment following the death of the Saudi journalist Jamal Kashoggi in November 2018 and is confident once the company proves its commercial potential that other investors will jump in to fill the funding gap.  OneWeb for its part, is financed by the Softbank group, which is expected to be offered to its $100B Vision Fund of which the Saudi PIF is the single biggest investor. It is further speculated that Saudi money is flowing through some other prominent investors in the valley, and some of these funds have invested in other emerging space players.   The Saudi money and Softbank investments, although not significant in number of investments, are huge in the volume of the investment sizes. Current/ future geopolitical situations could dry up big capital and the prospect of further financing from the two biggest investors in the technology scene. Companies like OneWeb and SpaceX are still underfunded according to their plans and need investors with the capability to write big checks as they progress with their businesses. Although NSR does not imply that these investors are the only way ahead, not having them might be limiting in some cases.

The failure of a unicorn within the emerging space market could ultimately affect the future of raising VC investments for newer emerging disruptive companies focusing on the space industry and slow things down for a long period. But even in an unfortunate scenario for a ‘Unicorn’ failing, there would still be a silver lining after all.  As seen within the Cleantech industry when the VC money dried up, there were other avenues of funding like debt-based financing, which became possible. Since many emerging space market players deal with hardware, this can be insured and thus can raise debt-based financing and it is on the rise in the last couple of years, which is a good sign for those unable to raise significant VC money.

As early adopters, investors have shown their confidence in emerging space markets and patiently wait for a return on their investments as the businesses they have a stake in are slowly setting themselves into motion (OneWeb having launched its 6 initial satellites). But the need for the ‘Unicorns’ to succeed in business is more compelling now than ever, not only for themselves or their investors but also the entire growing emerging space market.