China and India have engaged in space activities since the mid-1900s, developing domestic satellite manufacturing and launch capabilities across a range of applications. Both have focused on national demand, with limited international commercial pursuits. Yet this dynamic is quickly changing. The two nations have heightened their scope of activities, leveraging space as a strategic tool and implementing broad objectives in the commercial market – impacting the global stage dominated up to now by the U.S., Russia, and Western Europe, and potentially changing the shape of the space industry landscape altogether. 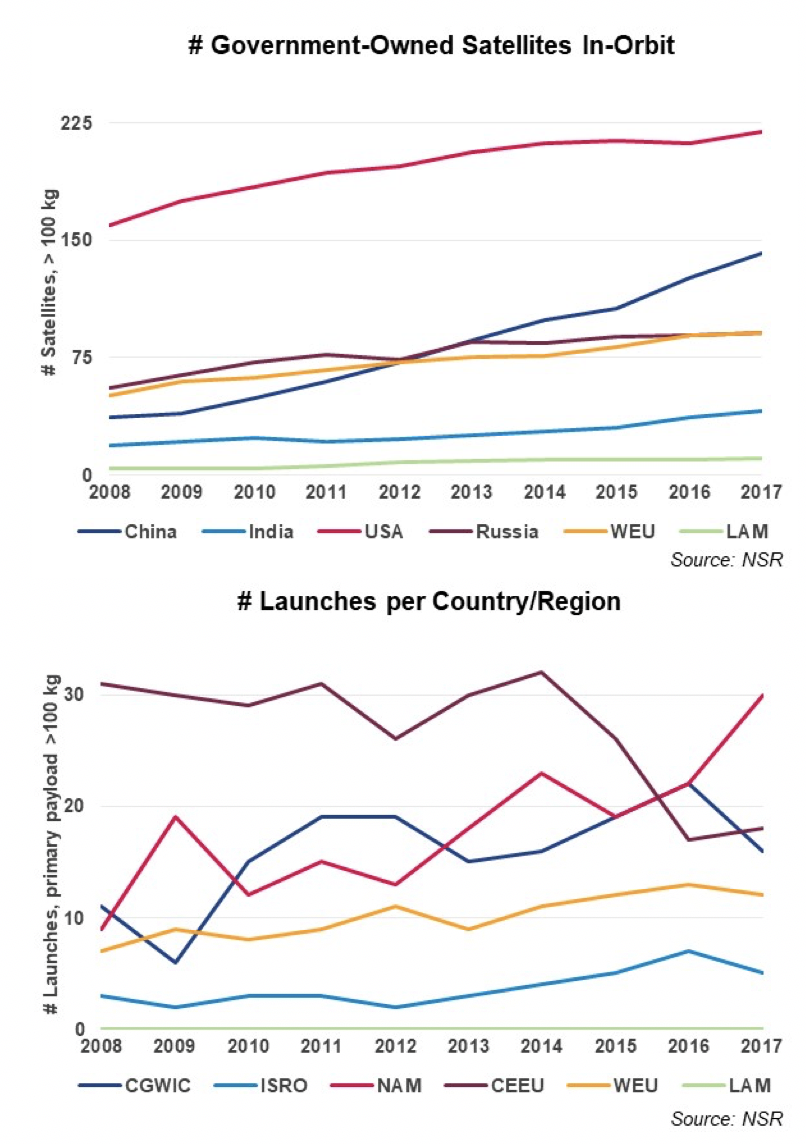 NSR’s Satellite Manufacturing and Launch Services, 8th Edition report found that Chinese launch activity increased at a CAGR of 4.8% in the last 10 years, while the number of Chinese government satellites in orbit increased at a 14.4% CAGR (almost double the next world player). These figures are set to grow with 2018’s already rapid launch rate. India has increased at a similar 5.2% and 8%, respectively. 2016 was a peak launch year for both nations, followed by a slower 2017 as launch anomalies demanded subsequent stand-downs of the Long March 5 and PSLV during failure review investigations.

Both the Chinese and Indian space industries continue to be dominated by state-owned and -operated players and restricted by government policy. NSR’s research found that the Chinese and Indian space start-up community grew at half the 20% CAGR of the U.S. in the last decade. Yet the entrepreneurial drivers are similar to those in North America and Europe, and support for private sector activities is budding. More start-ups driven by passionate young engineers and entrepreneurs are emerging, and with a solid technical foundation, a favorable cost dynamic compared to Western competitors, and potential access to a captive government market to develop heritage, these start-ups are well-positioned to compete internationally provided the right government support.

Alongside cultivation of more local manufacturing, launch, and satellite services players, India and China have prioritized exporting domestic capabilities to become a more global player. While U.S. regulations stand in the way of full market participation by both countries, each has found success in niche markets and is leveraging multiple avenues to tap into other sources of demand.

In parallel to building a broader commercial presence in manufacturing and launch, both countries are also expanding delivery of satellite services at home and abroad. Home to the two largest populations and among the fastest growing economies, India and China are a target market for commercial satellite operators. Yet both markets have been difficult for outsiders to crack, and with an increasing number of government-owned or -controlled satellites in-orbit in recent years, commercial operators are finding it even more complicated to address Indian and Chinese demand and are even seeing growing competition in other Asian markets.

Finally, both India and China have doubled-down on use of space to project power regionally and generate diplomatic capital. India’s 2014 successful Mars mission Mangalyaan was all the more powerful locally because it was an achievement that still lay beyond the reach of China. China’s unique human spaceflight program holds similar power, more so given last month’s announcement that the next generation Chinese Space Station would be open to international researchers via global partnerships. Contracts to manufacture and launch assets for Asian neighbors, such India’s SAARC satellite or Chinese contracts with Indonesia and Pakistan, exemplify this competitive dynamic. Space has always been a strategic capability, and India and China see it no differently.

While India and China both still trail Western counterparts in technical capabilities, especially for satellite power:mass ratios and payload characteristics, they are quickly catching up. With incentives ranging from servicing citizens to economic growth to strategic influence, both nations are expected to maintain and intensify the focus on space moving forward. How will today’s industry leaders and other government players respond? As India and China become established powers on the global space stage, will competitors maintain their own relevance, lose out to these competitive national interests, or manage to benefit from a larger pie overall?

Advancing capabilities across the Indian and Chinese space industries will generate competition across the satellite market value chain, starting with GEO and non-GEO manufacturing and launch to satellite operations to analytics and end-user services. As in any market, competition drives innovation, and this push from two new world space powers acting alongside today’s leaders will pilot us forward to next generation capabilities and a broader use of space resources.